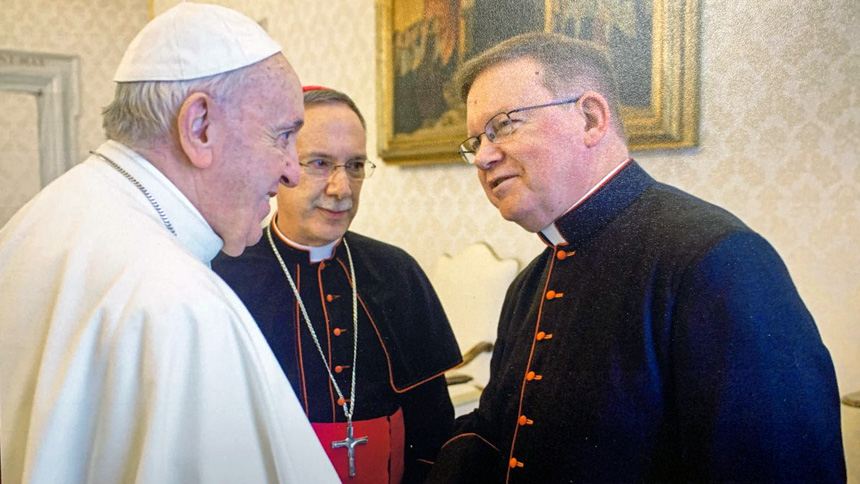 It was St. Patrick’s Day at St. Patrick Church. Monsignor David Brockman was talking to Bishop Michael Burbidge, who was bishop of Raleigh at the time and in Fayetteville to dedicate a new parish center. It was 2007 and the bishop was new to Raleigh.

Bishop Burbidge asked Monsignor Brockman to prayerfully consider serving as vicar general for the diocese, a role that supports the Office of the Bishop both pastorally and administratively.

At the time Monsignor Brockman was pastor of St. Patrick Church and would travel to Raleigh a few days each week to serve as adjunct judicial vicar in the Tribunal Ministry. The new role meant a change – as he’d leave serving as a pastor and begin full-time administration. There would be assisting the bishop with correspondence and calls from brother priests and the faithful. Other required tasks: attending to pastoral situations, developing diocesan protocols and procedures, and occasionally speaking on the bishop’s behalf at liturgies and other events.

Monsignor Brockman served in that role for 15 years, a period that also saw the building of a new cathedral, which also required the design, expansion and relocation to new diocesan offices.

As vicar general, he spent many weekends assisting brother priests in attending to the faithful in parishes throughout the diocese. In 2016 he became a pastor once again, additionally serving at St. Catherine of Siena in Wake Forest.

In 2017, Bishop Luis Rafael Zarama was appointed for the Diocese of Raleigh. Monsignor was reappointed as vicar general, and the new bishop asked him to move from St. Catherine Parish to Holy Name of Jesus Cathedral, given Monsignor’s leadership in its construction and the need to continue to expand its campus, as well as maintain and grow its Sacred Heart campus and the vibrant parish community.

Bishop Luis recently announced a transition in the Office of the Vicar General.

“I remain ever grateful for his priestly generosity and sacrifices to assist me,” Bishop Luis wrote about Monsignor. “While such sacrifice is reflective of the life of discipleship of Our Lord, I am also mindful that we each must be good stewards, especially regarding all those entrusted to our care."

NC Catholics visited Monsignor in his office at the Catholic Center recently. As he was preparing for the move, he spoke with the magazine about some of the highlights of his tenure. Fifteen years is, by most accounts, a long duration to serve as vicar general. Most terms are five years, on average, in the diocese. (An interesting piece of history – From 1926 to 1962, Monsignor Arthur Freeman was vicar general for the Raleigh diocese. He also served at cathedral.)

Monsignor Brockman mentioned that meeting people was a great joy. For priests, serving others, especially in the pastoral and spiritual dimension of life, is why the Church exists, Monsignor said. “With a diocese defined as a portion of the people of God, what a great honor it is to serve and interact with people,” he added.

He talked about building projects, and there have been many. Building a cathedral was certainly a “once in a lifetime” experience, he said. Monsignor Brockman was heavily involved in all phases from the initial discussions in 2009 to its design, its sacred art and the development of its Fisk pipe organ. He was involved with its 2017 dedication as well, with arranging for Pope Francis to bless its corner stone and the design of how 28 relics of saints of the Church would be placed in its altars. But it wasn’t the only building project. As a member of the Building and Real Estate Commission for the diocese since 1994, he assisted with over 90 projects, such as churches, new schools, parish halls and administrative buildings.

Among the highest honors, Monsignor mentioned, was in being with his brother priests and deacons. From assisting them in sensitive pastoral matters, to welcoming the newly ordained and those brother priests and deacons new to the diocese was a highlight during his tenure. Memorable too was the prayerful accompaniment of brother priests to Our Lord at the end of their lives on Earth. Many of these were not just those senior, but also mentors in the way of priestly life and ministry, as well as friends, such as Bishop F. Joseph Gossman in 2013, Monsignor Thomas Paul Hadden in 2012, Father Phil Tighe in 2020, Father Trent Watts from COVID-19 in 2021 and Monsignor Jerry Sherba, also in 2021.

Monsignor mentioned that serving with three bishops has also been a great honor. “A piece about all three, was their incredible generosity,” Monsignor said. “Bishop Zarama and I have maintained a good friendship, which began many years prior to him beginning his ministry as a bishop … and we will continue to do so. He is truly a treasure and a blessing for our diocese in many ways. You’ve seen what he has done, pastorally, especially among those in great need of healing. So, beautiful that has been to witness, including when he addressed and apologized for the abuse of minors … that was extraordinary.”

Visits to the Vatican and audiences with popes, were also notable highlights. In February of 2020 Monsignor was with Bishop Luis Rafael Zarama for his Ad Liminia visit with Pope Francis; he did the same in May of 2012 with Bishop Michael Burbidge in his visit with Pope Benedict XVI.  Although he wasn’t vicar general at the time, he was invited by Bishop F. Joseph Gossman and other brother priests to join him in a 2004 meeting with Pope John Paul II, who is now a saint. Monsignor recalls the moments with each pope – the way Pope John Paul II offered to pray for Monsignor’s father, who was gravely ill at the time, the humor of Pope Benedict and the warm welcome at the door, as if to a family home, from Pope Francis.

“Great memories, all coming from serving and being among those Our Lord gives – both clergy and laity – to attend how we may encounter and follow Our Lord as his disciples. It has been an honor to serve and contribute to the vibrancy that God has given to this great diocese, with many more opportunities, please God, to come,” said Monsignor. “’Go in peace, glorifying the Lord by your life,’” is the dismissal at the end of Mass. A great reminder to us all … but also a charge by which the Church invites us to how God calls us as the baptized to serve and be instruments of his grace, his mercy and his love, in each day we are given.”