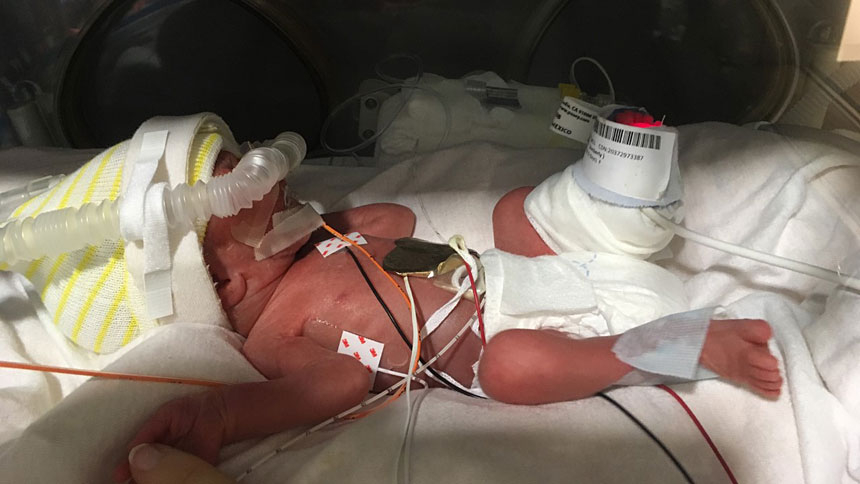 When Stephanie Kung started a mothers’ group shortly after moving to the Raleigh area in 2016, little did she know that Triangle Catholic Moms Raising Saints would make such a big impact.

The group includes families from the various parishes throughout the Triangle. St. Michael the Archangel Catholic Church in Cary provides space for play dates, family events and bulletin announcements. But the group is not limited to a single parish, as the founders believed there was a need throughout the area.

It turned out that they were right.

Amberly and Chris Weber found themselves in the Triangle area unexpectedly. The Aberdeen residents found themselves making an extended stay in the Ronald McDonald House in Chapel Hill when their baby Eileen became a long-term resident of the NICU at UNC Hospital.

That’s when Be Not Afraid Co-Founder Tracy Winsor reached out to Kung to ask if her moms’ group would consider adopting the Catholic family while they were in the area by providing care packages or meals.

Be Not Afraid is a Catholic, private non-profit that provides comprehensive support for parents carrying to term following a prenatal diagnosis. BNA began supporting the Webers following a routine ultrasound, which revealed some concerns in baby Eileen’s development.

It was two days before Thanksgiving when the baby’s parents were told that she did not have a nose and her eyes were too wide-set. A referral to BNA resulted in Eileen’s parents talking to BNA as they prepared for Thanksgiving entertaining. A subsequent referral to a specialist on the BNA Medical Advisory Board opened up new avenues of care.

The initial description of Eileen’s developmental issues was overstated. Ultimately, it turned out that Eileen had a two-vessel umbilical cord and was small for gestational age, but her facial structure was typical.

For Eileen’s parents, the care and concern showed by BNA was “great.”

Their BNA peer connected them to a local neonatologist who supported them in understanding their daughter’s development, alleviated fears about the worst-case scenario and gave them more confidence in her chances for survival.

The response from Kung and her Catholic moms’ group was above and beyond anything that the Webers could have imagined.

Kung, whose own daughter Rosalie had undergone four brain surgeries since birth, jumped in with both feet to organize deliveries of care packages and meal drop-offs to Chapel Hill several times a week for the duration of baby Eileen’s eight-week NICU stay.

Today Eileen is a happy, chatty toddler who loves to feed the family dog. Her parents are grateful that Eileen did not end up having significant medical issues and that she’s catching up developmentally with the help of physical therapy consults.

“Ultimately the goal was simply to bring them meals and/or care packages on a regular basis so they never went more than a few days without some help -- and a little reminder that we were out there lifting their family up in prayer,” Kung said.

None of the volunteer moms actually met Eileen’s parents personally, but as Kung said, the Holy Spirit was tugging on their hearts to offer what they could.

Eileen’s dad, Chris, said that their favorite of all the gifts they received were huge “Best Mom Ever” and “Best Dad Ever” mugs. Eileen’s mom, Amberly, added that the regular delivery of meals and gifts was like receiving care packages during a deployment. The Webers are both in the military.

A NICU veteran herself, Kung knew the generous hearts of the now 350+ members of the Facebook group. Following her daughter Rosalie’s prenatal diagnosis with the brain condition congenital hydrocephalus, the group of local Catholic moms covered the Kungs in prayer and brought them meals for weeks after Rosalie’s birth.

“I’m incredibly grateful … BNA’s support helped us prepare for the birth of our daughter both logistically and emotionally in ways that no one else in our lives could. We had a lot of spiritual support from family and friends that were praying for us, but we desperately needed help in other practical ways that only BNA provided.”

Today, one-year-old Rosalie is thriving. Adored by her two older brothers, her happy grin, infectious laughter, and strong spirit have made her the light of her parents’ lives.

Going through a prenatal diagnosis and living through Rosalie’s time in the NICU made it a “no-brainer” for Kung to pitch in to support Eileen’s parents in their time of need.

“Motherhood is such a universal experience that uniquely bonds women together, but the bond is much more so when you have both lived through a prenatal diagnosis coupled with basically living in a hospital with your child for any amount of time. I was confident that the women in the Catholic moms’ group…would say ‘yes,’” she said.

And say yes, they did! The Catholic Moms’ Group -- most of whom live in the Raleigh / Cary / Apex region -- delivered meals to the Ronald McDonald House in Chapel Hill every Sunday and Wednesday. The women prayed, lovingly cooked, bought gifts, and even handmade baby items; the outpouring of generosity made it clear to Stephanie that God was at work during the entire time.

Her recent experience as a NICU mom made it easy for Kung to identify what items would be especially appreciated, such as simple items like a good hand lotion to heal hands cracked from constant NICU hand-washing.

The experience of supporting baby Eileen’s family added a new dimension to the Triangle Catholic Moms Raising Saints group that was originally launched to foster a local community of fellowship, faith, support and encouragement among Catholic moms in the Triangle while living out the vocation of motherhood.

In addition to regular play dates, weekly prayer, moms’ nights in, moms’ nights out, book discussions, and liturgically themed family gatherings. Today the group members find wants to serve others, even during busy times in their lives.

“When our own painful experiences open up the door for us to help others in their suffering, it becomes a gift of healing that benefits everyone involved,” Kung said.