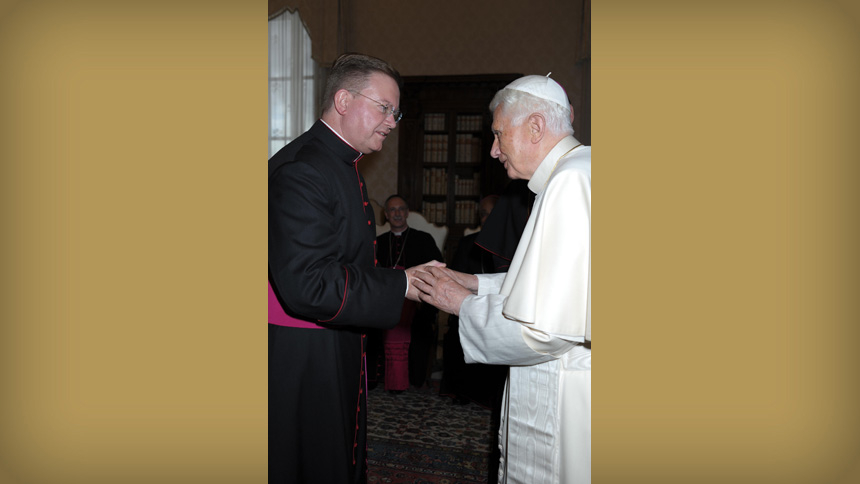 An ad limina visit at the Apostolic Palace is, by most accounts, a formal occasion. Every few years bishops and others visit to deliver formal reports on their diocese to the pope.

As they introduced themselves to Pope Benedict XVI, the pope spoke in English and lightened the mood with a comment to the monsignor. “He said, ‘You are the vicar general? You are the one who does all the work?’” Monsignor Brockman said, recalling the unexpected, but welcomed, humor.

Those around them joined them in laughter, it was captured in a photograph and it became a moment Monsignor will remember.

They, of course, discussed matters of the time, such as plans for the building of a new cathedral in Raleigh. At that point it was in a design stage, and Monsignor remembers thanking Pope Benedict for his theology on beauty.

“He had just published a paper on that,” Monsignor Brockman said. “And I said that it had provided us an important reminder as to the transformative character of design, specifically in sacred architecture.”

Monsignor Brockman is one of several priests in the Diocese of Raleigh whose lives were impacted by Pope Benedict XVI, the former head of the Church, who died Dec. 31, 2022 after serving as pope from 2005 until his resignation in 2013.

NC Catholics talked to some priests in our diocese about their thoughts on Pope Benedict XVI.

I remember, when I was in Rome in 2004, I was going with another priest from the same ecclesiastical province, but from a different diocese, we were walking outside of the Vatican on Rome's streets, and we recognized him and went up to greet him. He was dressed in a long black trench coat and had a black briefcase in his hand. We asked him to please say hello to Pope Juan Pablo II (Pope John Paul II) for us, and he asked us where we came from. The other priest told him what diocese he came from, and I also told him what diocese I came from, then he immediately told us, "Oh, you are from the same ecclesiastical province," and his intelligence amazed us and his memory, of how he knew so much and kept in his mind all the dioceses and how the ecclesiastical provinces were formed throughout the world!

Pope Benedict was one of the key authors I studied in my doctoral dissertation on Holy Orders. I have always treasured his depth and simplicity. He touched on so many theological topics in his 95 years that you could always count on his outlook and opinion to contribute to debates and dialogue. Many of his writings were conferences, so he knew his reflections were meant to be shared with many who sought a deeper knowledge of the truth.

I had the grace to live in Rome from 2005-2009 and 2012-2017 full time. I saw often how he had the heart of a pastor. During one of his first discourses as pope, I remember he put on these big thick grandpa glasses to read his discourse, and as he was explaining the pallium hanging around his neck, he raised it for a moment to show the crowd what he was describing. He just radiated pastoral paternity.

One year at a Corpus Christi procession from St. John Lateran to St. Mary Major, his gaze was fixed on the Eucharist in the monstrance. He was kneeling in front of it on the back of the truck that would take Our Lord and him in procession slowly to St. Mary Major. The Eucharist in that moment was his world; he only returned to us briefly when the truck was started and it broke his concentration for a moment, in which he stole a glance toward the crowd and flashed a brief smile. I’ll always remember his warm smile and the sparkle in his eyes when he was among us.

His writings are very clear and articulate the teaching of the Church. He was clearly a theologian, but also a pastor, and that came out in everything that he wrote … trying to make our theology communicated accurately, but also in a way that people can understand and go deeper in philosophical and theological foundations. Pope Benedict was very good about that level of invitation.

His series on Christology is important. He wrote three books on Jesus of Nazareth … his book The Spirit of the Liturgy is also very good. His contribution to the Second Vatican council is extremely significant, specifically his contribution to … Lumen gentium, the Dogmatic Constitution of the Church. At the time he was an advisor theological adviser; not long after that he was ordained a bishop.