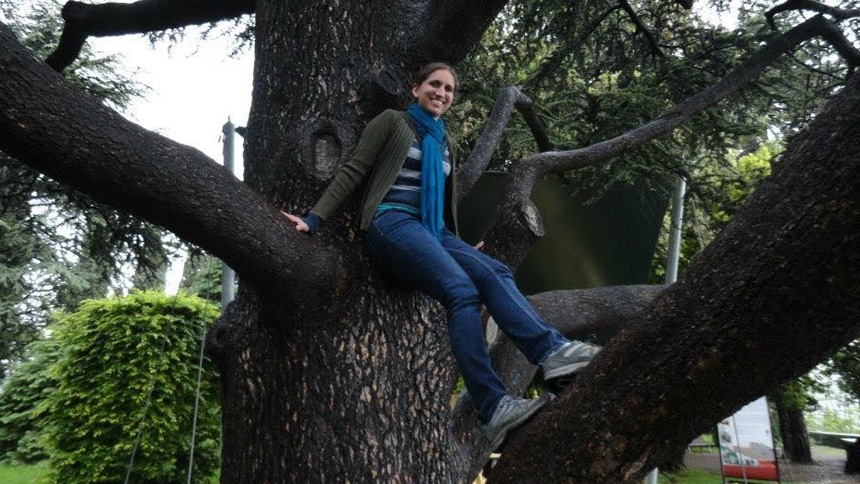 On one of her last days in the warm, sunny climate of Carolina, Kathie Chatelain pauses. She’s on her way to noon Mass, and looks up at the trees.

“It’s so beautiful today,” she says. From her ready laugh to the brightness in her eyes, it seems that she sees beauty everywhere.

In less than a week, she is going to delete her email and social media accounts, and give up her cell phone. She’ll begin to live a life that’s nearly the opposite of everything she had once dreamt for herself. When asked how she can be so peaceful and joyful on the verge of such incredible changes, she answered plainly: “I’m in love.”

The response may be simple on its face, but for many, the understanding can be challenging, especially in light of the fact that the love of her life is Jesus Christ.

Raised in Cary with two brothers and a sister, Chatelain attended St. Michael School and St. Thomas More Academy and said that she always thought the idea of a religious vocation seemed nice for someone else, not her. It was her sophomore year at Belmont Abbey College when that began to change.

“It really began with long nights in adoration chapel. It was like a series of arguments with Jesus and each time I lost an argument, I fell a little more in love,” Chatelain says.

She describes the “arguments” as excuses she would give during prayer that the religious life wasn’t for her. Each time she felt called she would think that she didn’t want to be away from her sister, or give up her car.

“Some points were more important than others,” she laughs.

Time after time, and argument after argument, Chatelain says, “He won.”

She began to sacrifice that idea or excuse and offer it to God. Each time she let go, she felt a rush of peace and love. After nearly a year of similar moments, at the beginning of her junior year, she gave over the last of her worries and said, “yes.”

She wanted to share the news with everyone, she says, and discovered quickly that those who knew her were not so surprised.

“When Kathie was about four years old, I woke up between five and six in the morning and she was sitting alone on the couch praying a rosary,” she says, adding that she believes her daughter’s faith journey started even before birth.

When she was pregnant, Colette Chatelain visited Medjugorje, where - in 1981 - six young people claimed that Mary had appeared to them.

The trip was a gift from the estate of her late aunt, who was a religious sister. “I just think that Kathie was touched in the womb in Medjugorje,” she says.

Though signs may have been present from the very beginning, Chatelain’s call to vocation has been a walk of faith for her parents, too.

They describe mission trips to Honduras, Africa and Spain where their daughter felt called, without ever worrying about funding or transportation or with whom she would travel.

“She’s not a planner, but God takes care of her,” her mother says.

Once, when planning a trip to Israel, Chatelain admitted she was nervous because of the expense. Surprised to see even a hint of doubt in her daughter, her mother asked her when she ever had to worry about finding money.

Chatelain responded, “I know, [I think] Jesus laughed at me too.”

Her father, Ed Chatelain, relayed the story to a men’s group be belonged to.

“My comment was, ‘I don’t have those kinds of conversations with Jesus, I don’t get that kind of response. But it’s kind of cool that she does,’” he said about speaking to his friends at the meeting.

Immediately afterward, one of the men at the table said he was part of a charity that helps with pilgrimages and similar things. And just like that, the trip was funded.

Consolations and faith affirming moments have been a constant presence in Chatelain’s life. That’s why - seven years after she initially said “yes,” (she took time to finish her degree and pay off her debt) - she feels peace as she leaves for Baileys Harbor, Wisconsin, to join Missionaries of the Word.

The community is new. Founded in 2014, it currently has four sisters. Chatelain and her two sister postulants will practically double its population. Missionaries of the Word is contemplative-active, which means, as Chatelain describes it, that though they are actively working, primarily in giving retreats for youth, their life is based first and foremost in a fervent prayer life.

As for the Wisconsin climate? Well, she had to pray on that one. She was scared of being cold but adds that, any time she has a fear, God will challenge her to face it.

“If I have a fear, he loves me far too much to let me live controlled by that fear,” she says.

These challenges and her peace with them are all part of her faith journey, which she describes as a dance with Christ.

“At first, he asked me to let him lead, that was hard enough. But once I was comfortable there, we moved to dance near a cliff. And then, he gave me a blindfold,” she laughs, understanding the metaphor might sound scary. But, she adds, each time she said “yes,” she felt more secure.

“When you give your heart to Jesus … he’s going to take really, really good care of it,” she says.