Lenten letters: a tradition of sharing 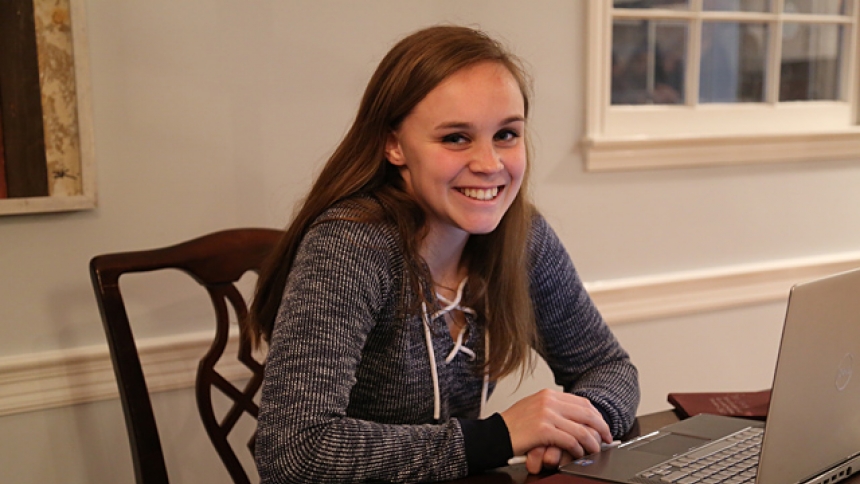 Above: Instead of giving something up for Lent, Amelia Crouch decided to give something. Each Lent she writes 40 letters to important people in her life and says the experience brings her closer to God.

When Amelia Crouch was in 7th grade, she felt inspired to do something different for Lent. Giving up candy wasn’t bringing her closer to God, she said.

She went on the Life Teen website and read about writing letters—40 of them to represent the 40 days of Lent.

“I thought that was really cool because I love getting letters in the mail, and no one does that anymore,” she said.

Now a senior at Sanderson High School, she works on a table covered with not only notecards and stamps but college applications and brochures, too. Her tradition has not only held strong, it has grown and become one of the most important parts of her year. For six years, she has delivered gratitude, laughter and joy through the U.S. Mail and has even inspired others to write letters of their own.

Her best friend, Ally Doyle, was among the first to receive a letter and has received one every year since. She said that Amelia’s original goal was to give something rather than give up something.

The first year Amelia attempted the daunting letter task, she didn’t give herself enough time to write each one. Now her preparation for the Easter season actually starts in Advent, when she creates a list of recipients.

Once the list is set, Amelia takes time to reflect on each person and how they impacted her throughout the year.

“There are some people that I’m really excited to write,” she laughed. “I write their letters right away.”

As she gets set to leave for college, those messages seem especially poignant this Lent.

“I’m doing my letters a little different this year, so it’s been a little harder. This year I’m actually telling people how they’ve influenced me and how their presence has affected my life. I’ve definitely cried a few times writing these letters,” she said.

She keeps notes and rough drafts on her computer; but, when the time comes to write the letter, each is handwritten, a touch that her mom, Molly Crouch, finds especially meaningful.

It’s not unusual for Amelia’s family to laugh at the amount of time she spends on the letters.

“We’ll say, where’s Amelia? Oh … she’s writing her letters again,” Crouch added. “[But] I think it’s definitely an outward sign of God’s love. That’s the feedback we get. You can feel the love, God’s love, through her words.”

For Amelia, the most exciting part is knowing that she is bringing a smile to someone’s day.

“People will call, or text, or even write me a letter back telling me they got my letter and how much it meant to them,” she said.

In one special response letter, her friend Gabriella Ercolino shared how much she appreciated the tradition.

“She was one of my role models on the volleyball team. She left me a really nice card that meant a lot to me so I just wanted to write her and let her know I was thinking about her,” Gabriella said. “Writing letters to people and praying to God, thanking him for the gift of their presence in my life, has really helped me to grow in my love for God and for others.”

As years go by and life continues to change for Amelia, she knows that her letters will change too. Her siblings said they’ve been promised to get their first one when she’s living away from home. But what won’t change is the joy she has brought to others and how that shared love has deepened her faith.

NC Catholics reached out to some of the people who received letters from Amelia during Lent. They shared what they think about the letters, and how the gift of the handwritten letters impacted them.

“Every year is different. They are decorative and colorful, I like to see how the letter itself looks and what’s different. And I also just like that it’s a letter. People call or text you, but no one actually sends you a letter in the mail!” - Ally Doyle, 18

“In this day and age, it means so much to know that you’re loved and that you’re appreciated and that you’re needed. I think it should be everyone’s mission to make people feel good and let them know how much they impacted you because sometimes people really need to hear that, that their friendship and their love and their service to you has made you a better person.” - Gabriella Ercolino, 17

“The letter that I most cherished was the one about how she liked our private talks when we would discuss God. She would tell me about the inspiring speakers she heard on the retreats for her youth group. To know that these talks meant as much to her as they did to me touched me deeply. Having these letters is so special because I live far away and can’t keep up with all she does, but I can pick up one of her letters and feel connected again. " - Nancy Crouch, Amelia’s grandmother