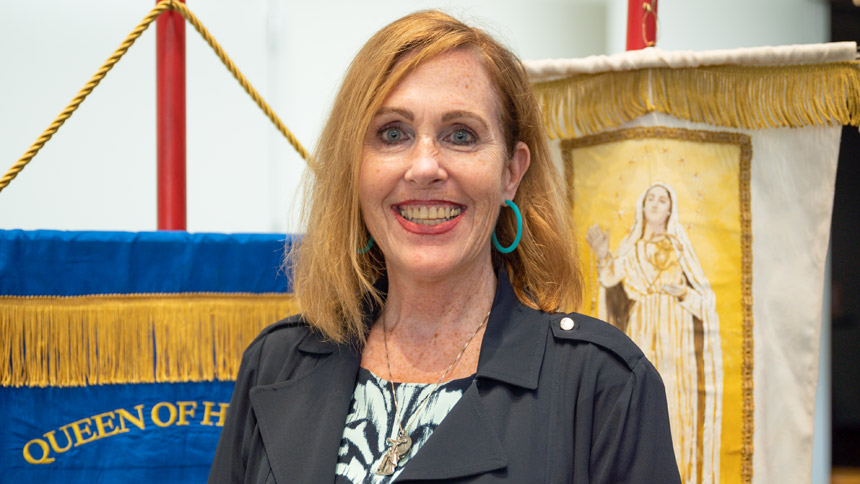 Tammy Huffman has been a member of the Legion of Mary for 18 years. A lifelong Catholic and native of New Hampshire, she’s a parishioner at St. Luke in Raleigh. Huffman recently talked with NC Catholics magazine about her experience with the organization, which is celebrating its 100th birthday, globally, Sept. 7, 2021.

NC Catholics: What prompted you to join?

Tammy Huffman: I had been looking for something to get involved in in the church. So I picked up a pamphlet … very detailed about active membership in the legion. I took it home and I read it. I prayed about it. I went to the Madonna House [which used to be in the diocese] and made a poustinia, did the overnight thing. It’s basically a silent, self-directed retreat. I went there because I was trying to discern if the legion was really where I was being called to best serve the church. Then … I went to one meeting [of the Legion of Mary] and I have been going ever since!

NCC: Was it difficult to find time for this in your life?

TH: The legion is a spiritual army. If you put your trust in Our Lady, she will make it happen. I was a mom, working, married, had young children, you know. The legion meets once a week for a meeting where we are spiritually nourished, if you will. Then we go out and do two hours of apostolic work … [such as] visiting the sick, outreach to the homeless and Catechesis. It’s a very diversified role we have.

NCC: With the pandemic, how have things changed, especially with nursing home and hospital work?

TH: We have found creative ways … we send them cards and let them know we are praying for them. There are some groups that have let Catholics pray the rosary over the phone with legionaries. We stay in touch so that they know they are not being left alone. We are the feet and hands of Our Lady bringing Christ to people.

NCC: What’s your current role in the Legion of Mary in the Diocese of Raleigh?

TH: President of the curia, which is the … council within the diocese. Every officer’s position is a three-year term. And after three years, another three years is allowable. But there’s only a total of six years allowed in any officer position. So, I’m in my first term.

NCC: Tell us about the statue, the pilgrim virgin statue of Our Lady of Fatima, that travels and is part of the Legion of Mary’s work.

TH: That’s a great work that we do … rewarding. And it helps families to engage in that very important work of family prayer, especially praying the rosary. It’s fruitful. We bring the statue into the home … we leave the statue with the family in their home. It can be for one week or two weeks, sometimes even longer depending on the family. And we have heard some miraculous stories about things that have happened! It’s very encouraging for all of us to come back to our meetings and retell these stories.

NCC: What types of membership are there in the Legion of Mary?

NCC: How many praesidium, or Legion of Mary Groups at the parish level, are there in the Diocese of Raleigh?

TH: We have 16 senior praesidium groups, which are the adult groups. Some of the parishes have more than one. And currently we have two junior praesidium, which are for members under the age of 18.

NCC: How has being a member impacted your life?

TH: The legion has taught me so much about my Catholic faith than I ever could have learned on my own. It’s taught me a love of the Church … and it’s all the grace of Our Lady. She just shows us her son and how beautiful the Church is. And how necessary the Church is. Being a member of the legion, the reason for our membership is for our own salvation and then we work toward the salvation of other souls. The whole purpose is for salvation.

According to the organization’s website, the first meeting of the Legion of Mary took place in Myra House, Francis Street, Dublin, Ireland, Sept. 7, 1921.

The website states, “This meeting was to have very beneficial consequences for the mission of the Catholic Church and, in a special way, for millions of members of Christ’s lay faithful.”

The Legion of Mary was founded by Frank Duff, who lived from 1889 to 1980. A cause for his beatification was introduced in 1996.