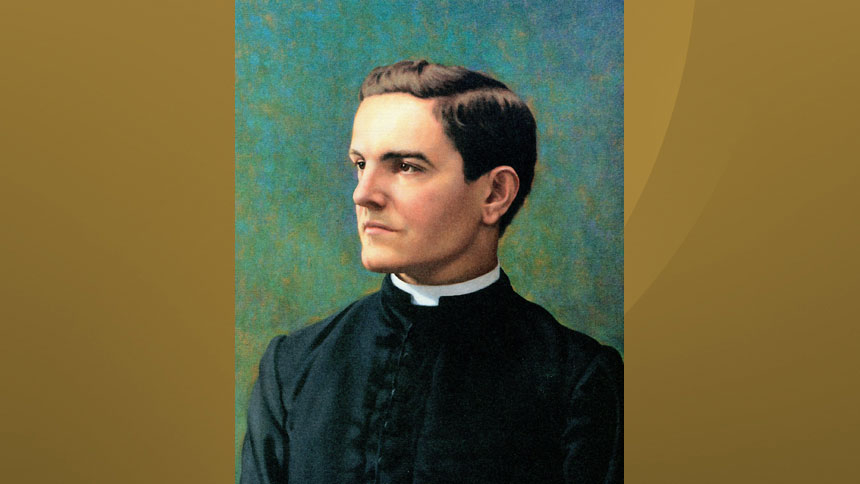 The Knights of Columbus are inviting all to pray a nine-day novena for beatification of Father Michael J. McGivney. The event begins Oct. 22 and concludes Oct. 30.

Father McGivney (1852-1890), a priest at St. Mary Parish in New Haven, Connecticut, founded the Knights of Columbus 138 years ago to enable Catholic men to support one another and their families with spiritual and temporal needs.

Today it is the largest Catholic fraternal service organization with nearly two million members in more than a dozen countries.

Father McGivney's beatification Mass will take place Saturday, Oct. 31, at the Cathedral of St. Joseph in Hartford, Connecticut. At that liturgical celebration, an apostolic letter from Pope Francis will be read, along with the bestowing of the title "blessed" on Father McGivney. This is the step just prior to sainthood.

A miracle recognized by the Vatican occurred in 2015 and involved a baby, still in utero, with a life-threatening condition that, under most circumstances, could have led to an abortion.

That baby, Mikey Schachle, is now 5. His parents, Dan and Michelle Schachle, of Dickson, Tennessee, prayed to Father McGivney to intercede with God to save their son, still in his mother's womb, who was given no hope of surviving a life-threatening case of fetal hydrops.

The son of Irish immigrants, McGivney was born in Waterbury, Connecticut, and was ordained a priest in 1877 for what is now the Archdiocese of Hartford.

He will be the first American parish priest to be beatified and has long been a hero of working-class Catholics. When he died of pneumonia complications at age 38 in 1890, it was during an outbreak of influenza.

"Father McGivney has inspired generations of Catholic men to roll up their sleeves and put their faith into action," Supreme Knight Carl Anderson said. "He was decades ahead of his time in giving the laity an important role within the Church. Today, his spirit continues to shape the extraordinary charitable work of Knights as they continue to serve those on the margins of society as he served widows and orphans in the 1880s."

He added, "Father McGivney also remains an important role model for parish priests around the world and left us a transformative legacy of effective cooperation between the laity and clergy."

After the announcement that the priest would be beatified, Anderson told Catholic News Service in an interview: "We've been praying for years for this to occur, and finally this day has arrived."

The initial work on his sainthood cause began in 1982 on the Knights' centenary. His cause for canonization was formally opened in Hartford in 1997.

An additional miracle attributed to Father McGivney's intercession will be required for his canonization as a saint.

Visit: The Knights have set up a new website for Father McGivney's sainthood cause.

Watch: Learn more about the life of Father McGivney in this video series from the Archdiocese of Hartford.