It’s 'game on' in Durham 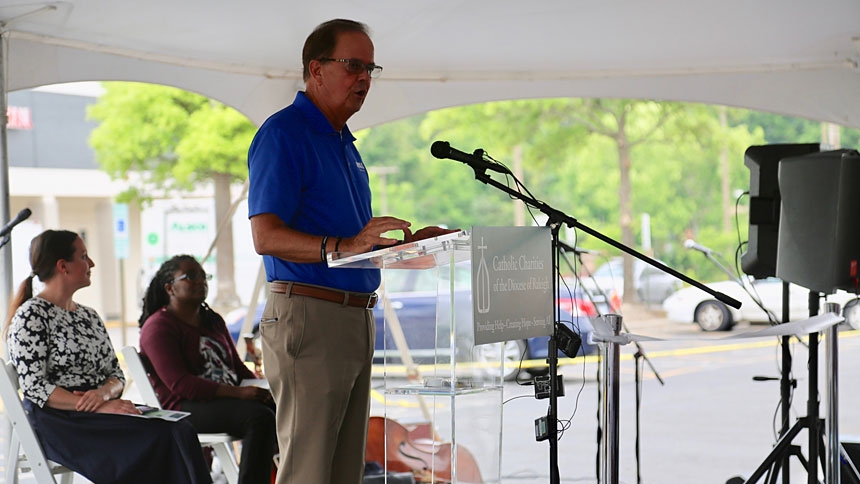 We’re still a few days away from college football season. And I am eons away from being a fan of Duke’s sports teams. But one thing that’s true is that this Tar Heel is a huge fan of what Coach David Cutcliffe had to say at the ribbon cutting for the Durham Community Food Pantry.

Coach Cut, who leads the Duke football program, began his remarks by remembering Father Joe Vetter. Then he thanked Father Joe’s sister Marie for all the Tuesday dinners she prepared for the students at Duke when her brother was chaplain there.

Next, the coach went straight to fun and competition. He set up a men and boys versus women and girls snap count. He taught everyone the rhythm and the words – down, set, hut.

“You can’t have a ribbon cutting without snapping the ball,” he said, unassisted by a microphone because, well, he has a coach’s voice. It’s clear. And it carries.

A winner wasn’t officially declared, but let’s call this one for the gals because coach said they “blew it out of the water.”

Once everyone had a chance to loosen up, yell in rhythm and laugh together, he approached the microphone and got serious.

“The greatest leader that the earth has ever known was a servant and that was Jesus Christ,” he said. “Leadership is there for everyone … you don’t have to be declared one. You’re a leader by serving your community and serving others. This [food pantry] is a grand opportunity. You’re here today because you are a great team … and it is all going to be team work. It’s gonna take all of us.”

He closed by speaking specifically to the young people in the audience. He asked them if they played sports. Some nodded yes.