It’s in the bag: Wimbledon champ carries gift from confirmation sponsor to each match 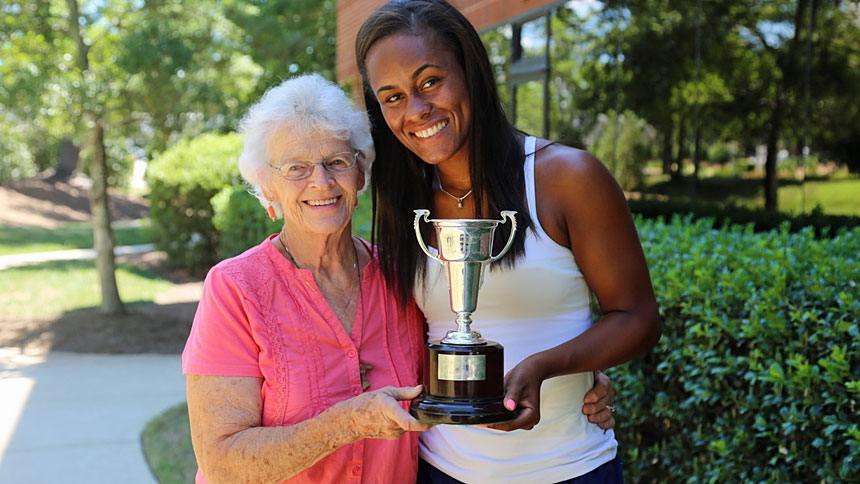 Above: Joan Monti (left) and Abbey Forbes hold the personal trophy Forbes won July 14 at Wimbledon. Forbes was confirmed in April, and Monti was her sponsor. The two became friends due to their love of faith and appreciation of tennis.

RALEIGH - A year ago Abbey Forbes was a young tennis player hoping to reach the French Open, U.S. Open and Wimbledon. She was training six hours a day, doing high school coursework online and acting as big sister to her two brothers.

But world-class tennis, senior year and committing to college weren’t enough; she sought to add something else to her life – spirituality.

A year ago, Forbes didn’t know Joan Monti, a retired nurse, widow and grandmother of seven.

But things have changed in the last 12 months.

Today Forbes, 18, is a Wimbledon champion. With partner Savannah Broadus, she won the girls’ doubles title July 14. And Monti, 80, is one of Forbes’ biggest fans.

The pair met at an introductory gathering for RCIA, a program through which adults become full members of the Catholic Church. Monti was there as a volunteer, and Forbes attended as a candidate.

As people socialized, Forbes mentioned the U.S. Open, which she had just competed in as a junior. Monti had recently returned from watching the same tournament on a trip with her son. Tennis was special to Monti, too, as she was a recreational player in the 1970s and a tennis mom in the '80s traveling with her daughter to local tournaments in New York.

“Something just drew me to Joan. I like to say now that it was the spirit,” Forbes said. “I told our leader … ‘Hey, can Joan be my sponsor?’ I found it really nice of her that she was able to talk to me about my sport, something I love so much.”

Over the course of the nine-month program they talked about a lot. Group discussions centered around church history, the liturgical calendar, social justice and sin. They journaled. They prayed. Forbes’ grandfather, Barry Lawson, attended the sessions, too.

According to Monti, Forbes contributed to group discussions and asked thoughtful questions prior to her confirmation and first Communion April 20 at Raleigh’s St. Francis of Assisi Church.

She played in 10 tennis tournaments during the course of RCIA, and sometimes joined the group through the FaceTime app on iPhone when she couldn’t be with the class in person.

“I thought that was kind of cool that we were able to do it virtually,” Forbes said as she turned to Monti with a smile.

“Yes, yes … I had many helpers,” Monti laughed, recalling technical difficulties. “I finally learned how to connect to FaceTime.”

Forbes learned to connect with Monti’s methods of communication, too.

In March Monti gave her a daily devotional titled, “Jesus Calling.” A bestseller, the book was well known to Monti and her friends. But it was completely new to Forbes, who was baptized as a baby and taught Catholic prayers and songs by her father, Roger, but given time and space to grow into her faith at her own speed.

“I decided that I was going to keep that book in my tennis bag,” Forbes said. “Every match. Every practice. I open it and I read the daily reading. And I pray on it. It just keeps me connected to my faith while I am playing sports.”

Forbes had the book with her at the French Open in late May and in July at Wimbledon. It was in her bag for all seven Wimbledon matches she played with Broadus, who is from Dallas, Texas.

“I was so nervous … excited. I really wanted to win,” Forbes said about her feelings just before the final match. “I was asking God for strength and grace and all of those things to be brought with me out onto the court … and I asked him to be with me. That book is just my reminder.”

Through faith and sport, Forbes has learned to focus on prayer. It’s something she first picked up by watching her mother, Denise.

“My mom. She’s the one who actually goes to all the tennis tournaments with me,” Forbes said.  “Whenever something would happen that was unfortunate or something in the world was going on, she always prayed. When I was little … I just knew, ‘Oh mom’s praying. Mom is praying that the people get better. Or the situation gets better.’ But now I understand.”

Like many athletes, Forbes notices how her performance may improve or suffer based on what’s happening in her life. As she attended RCIA and grew even closer to her grandfather through sharing their faith, she noticed her happiness and how that translated to success on the tennis court.

She calls it “playing free.”

When her brother Luke, who has autism, was diagnosed with Leukemia in May, she noticed how her fear about his diagnosis caused her tennis to struggle.

“Luke is my rock. I relied on God there because I wasn’t able to be home. I had to be in Paris that next week [after his diagnosis] and I felt like the only person I could trust was God. I really leaned on him. I still do because it’s still happening and it’s going to be a long process for him to get better,” Forbes said.

She’s home in Raleigh now, fielding calls from reporters and visiting with friends and family.

She shows the engraved Wimbledon trophy to those who ask to see it. It sits in a green wooden case lined with purple satin. There was some cushioning around it, but she threw that packing material away because her brother Matthew popped all the tiny circles.

She had a celebratory lunch with Monti July 22 at a Raleigh pizza place, and then Monti went to watch her practice with a tennis group in Cary at one of the public courts.

As she watched Forbes, who often speaks softly and deliberately, take the court and begin hitting the tennis ball with intensity, Monti’s eyes grew wide.

“She’s … strong and fierce on the tennis court, and the other side of her is she’s sweet and kind and not so fierce,” Monti laughed.

Forbes is looking forward to her college experience, which will begin in a few weeks when she arrives at UCLA to study and play tennis. She has already visited the University Catholic Center and said it will become an important part of her life as she continues her faith journey and experiences the highs and lows of life.

“My mom always said when you’re in your darkest times, God is always there for you,” Forbes said. “Just that feeling alone is so good for your mental health, for your physical health, and it warms the people around you because they know that you’re going to be OK because you know that even if humans on earth aren’t supporting you, you always have God’s support.” 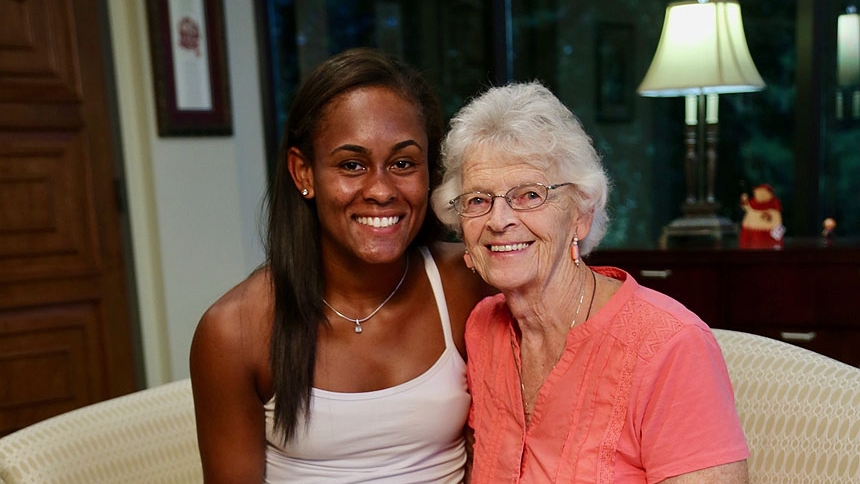 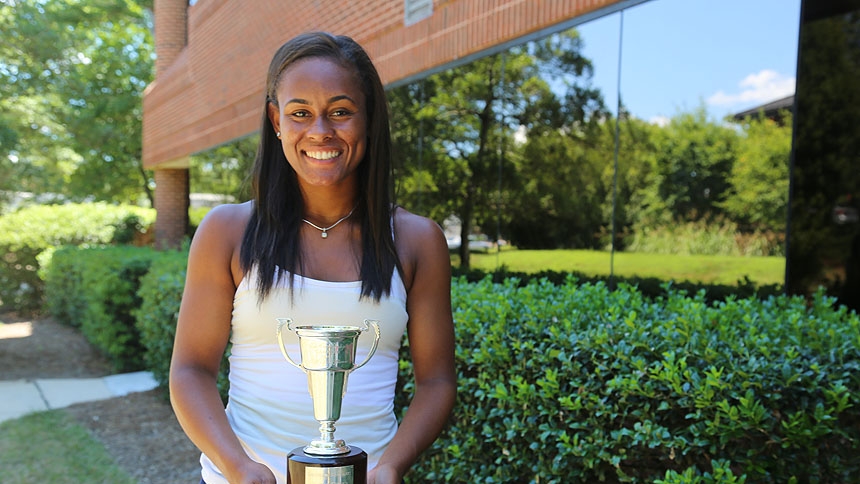 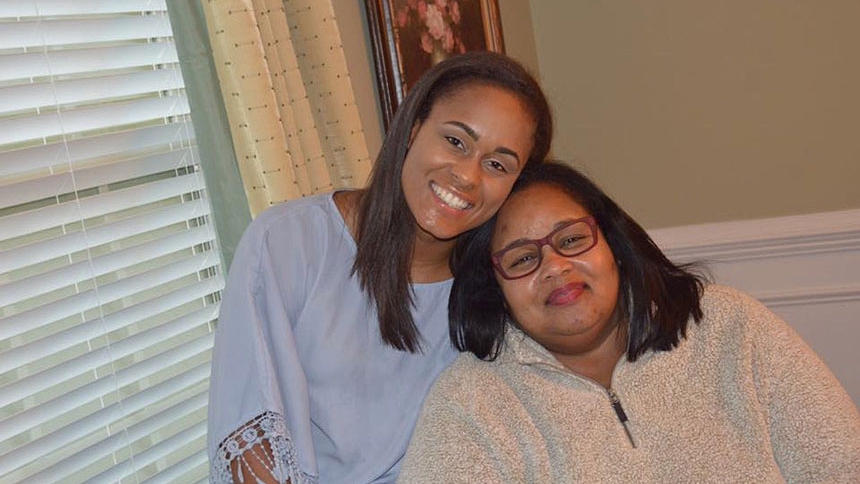 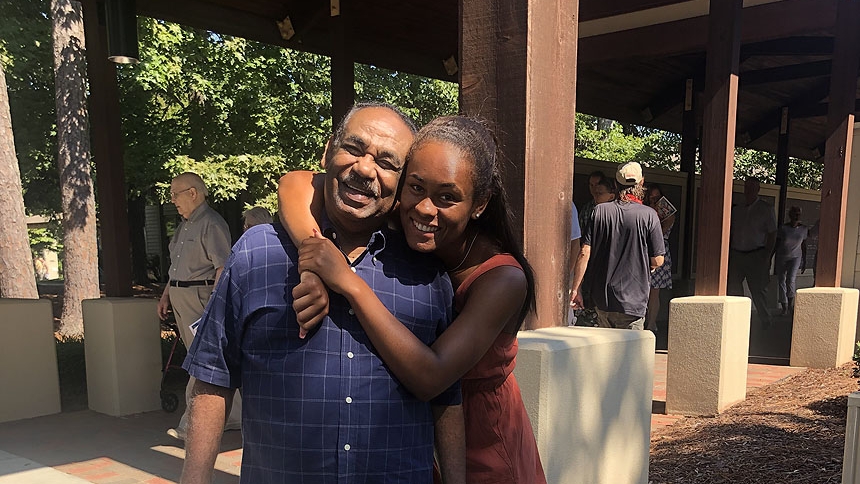 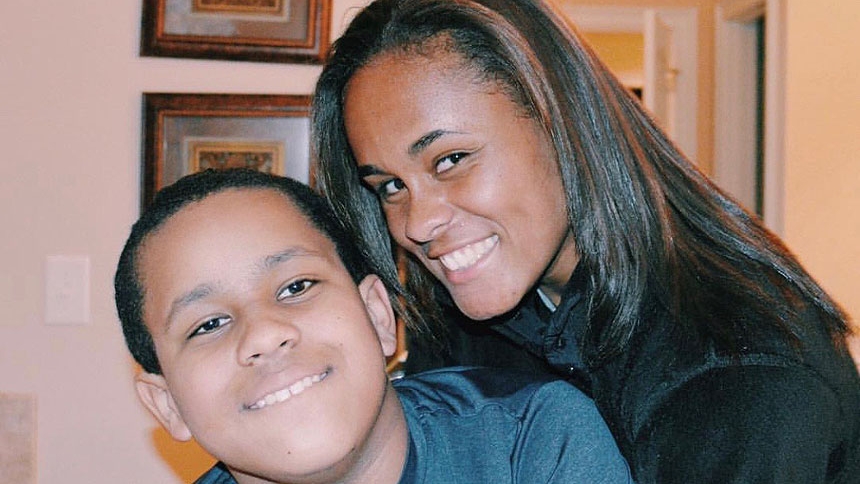 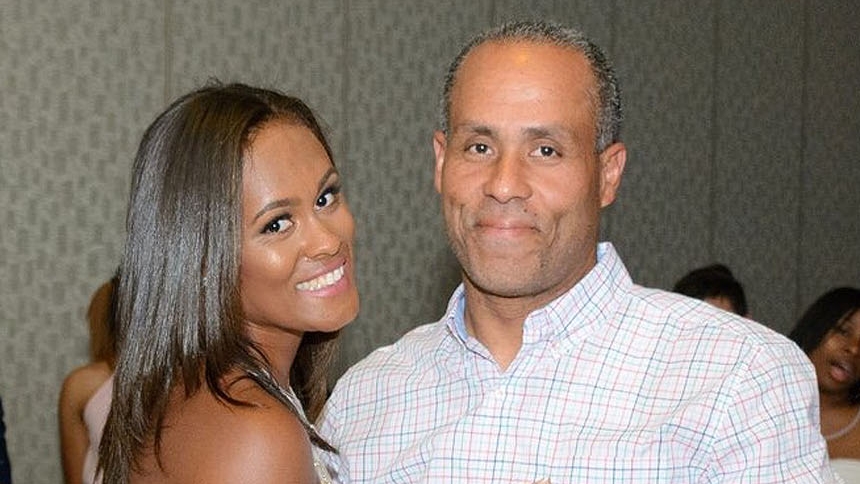 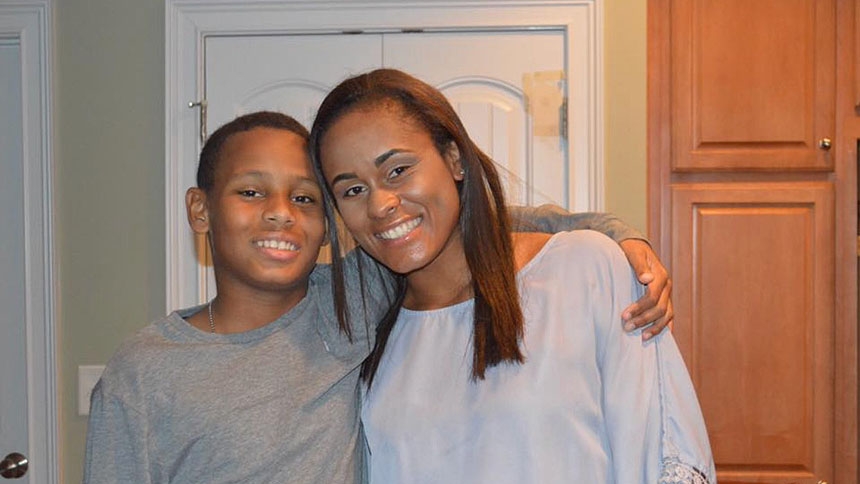 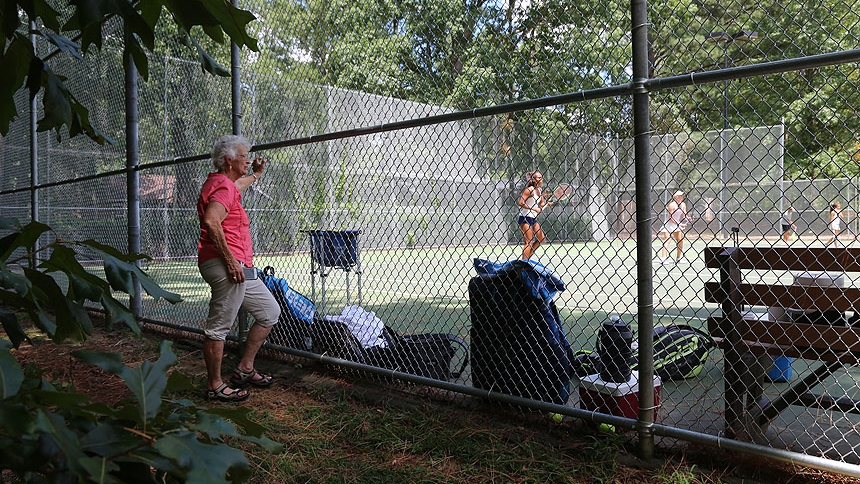 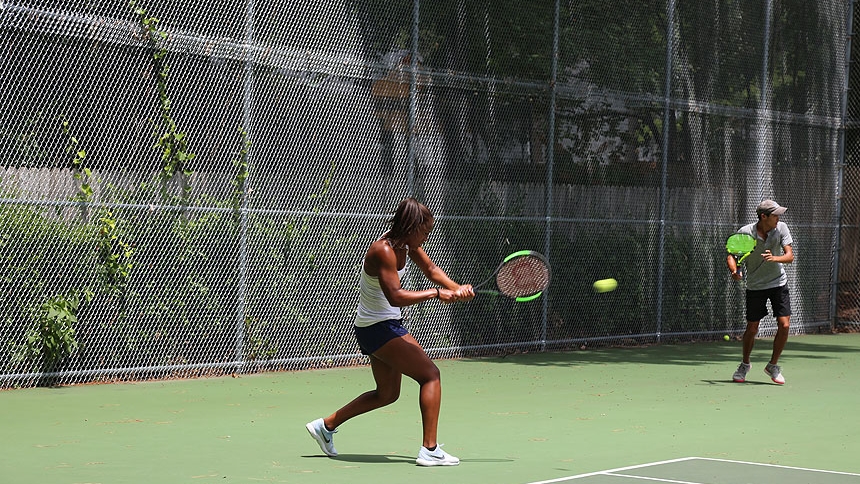 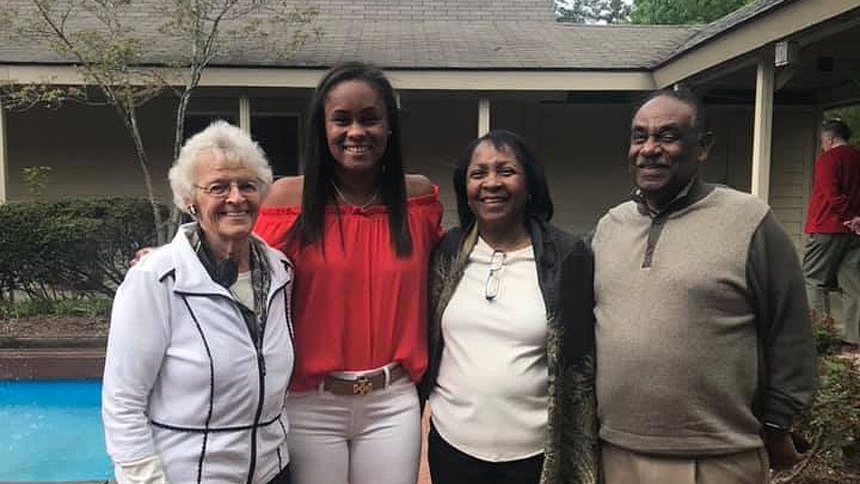 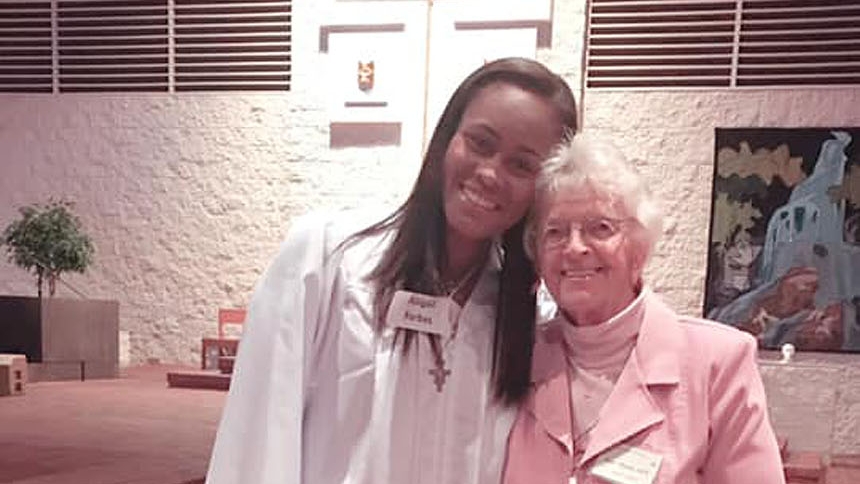