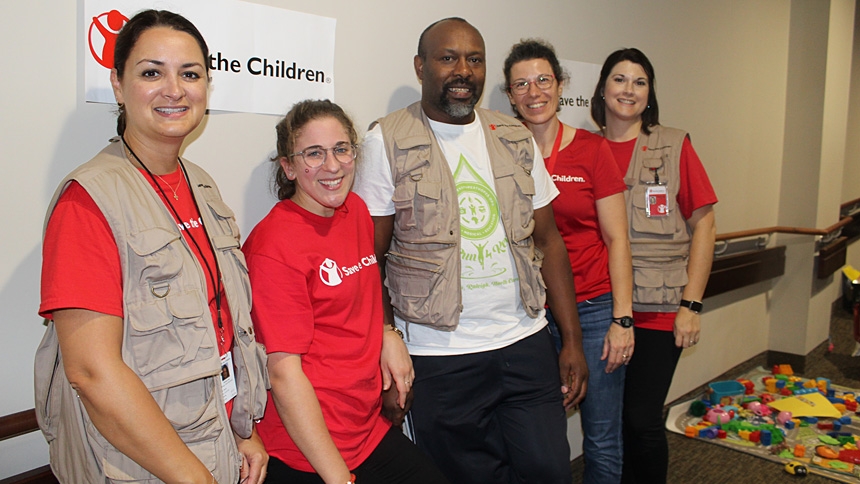 In the days before and after the storm, Chapel Hill became a temporary home for families seeking shelter. Some of those families were Congolese immigrants and spoke Swahili, the Northern Bantu language of the Swahili people.

Interpreters were needed, but difficult to find.

Save the Children, a global charity headquartered in Connecticut, deployed to North Carolina to set up child-safe spaces in shelters. As they were meeting with families, they realized they needed help to communicate with some refugees who spoke Swahili.

Aren Koenig, a domestic emergencies unit specialist with the organization, did some investigating and learned that Raleigh’s Our Lady of Lourdes Church offered a Mass in Swahili. Wanting to learn more, she contacted Daniel Altenau of Catholic Charities in the Diocese of Raleigh.

Altenau was able to connect her to Simon Gitau, a parishioner from St. Catherine in Wake Forest. He was immediately available to help.

“I like helping others, that’s the best way to show our love for God,” he said.

Gitau visited a shelter at the Friday Center at UNC-Chapel Hill and, for hours, provided interpretation services for Save the Children and shelter organizers.

He was also in charge of making announcements to the families who spoke only Swahili, most of whom came from the New Bern area.

“Our good actions can attract people to our faith,” Gitau said.