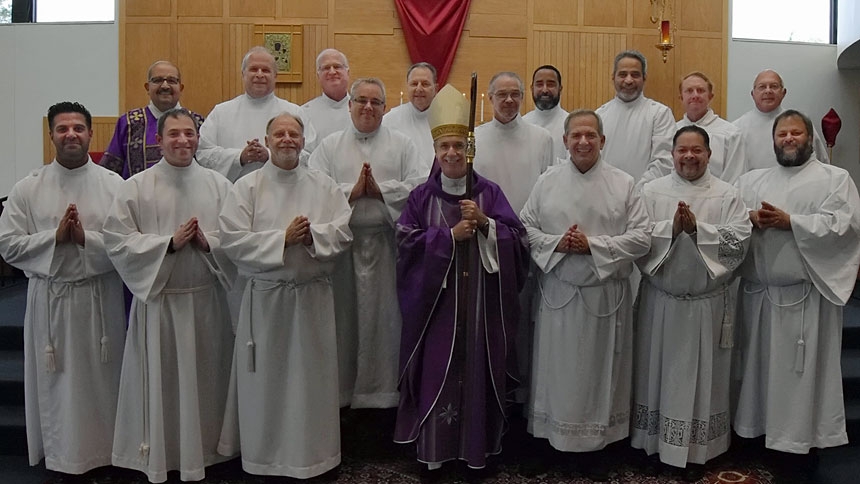 On Sunday, April 7, 2019, Bishop Luis Rafael Zarama celebrated the Institution of Acolyte, a step on the path to ordination, at Our Lady of Lourdes in Raleigh.

What is an Acolyte?

The ministry of acolyte is one of two ministries into which a man must be formally instituted before being ordained in the Roman Catholic Church, the other being that of lector. Acolyte and lector both used to be considered minor orders (along with porter and exorcist), which men seeking ordination would receive before entering the major orders of subdeacon, deacon, and priest. In a 1972 document called Ministeria quaedam, Pope Paul VI did away with the minor orders of porter and exorcist and subsumed the duties of the subdeacon into the roles of lector and acolyte, which he renamed "ministries."

Those men seeking ordination in the Catholic Church are now installed into the ministries of lector and acolyte before being ordained deacon, at which time one enters the clerical state. (It is worth noting that there is an important distinction between a deputed reader and an instituted lector; the latter is generally reserved for men preparing for ordained ministry as either a priest or permanent deacon.)

This is how Ministeria quaedam defines the ministry of acolyte:

The acolyte is appointed in order to aid the deacon and minister to the priest. It is his duty therefore to attend to the service of the altar and to assist the deacon and the priest in liturgical celebrations, especially in the celebration of Mass--in other words, the things one would typically see an altar server doing.

What is the distinction between an altar server and an acolyte?

Being formally instituted by a Bishop through a rite, an acolyte can also do things that an ordinary lay person (including an altar server) may not do. He is able to distribute Holy Communion as a special minister if necessary, taking precedence over lay extraordinary ministers, and may also be entrusted with publicly exposing the Blessed Sacrament for adoration by the faithful and afterward replacing it, albeit without offering Benediction, which is reserved for the ordained; as well, he can and should train other servers who will be assisting at the altar and, in the absence of a deacon, is the first choice for assistance in preparing the altar and purifying the sacred vessels. An acolyte is also the first choice for several other duties which are fulfilled by altar servers only due to necessity. These include carrying the crucifix during the procession into and out of the sanctuary and incensing the congregation. Whenever possible, these duties should be performed by an acolyte.

After a man has been initiated into the ministries of acolyte and lector, he may then be later admitted to candidacy for ordination through a rite wherein, in the presence of the bishop, he is called forward and offered the opportunity to publicly express his intention to receive ordination as a deacon and, perhaps later, as a priest.