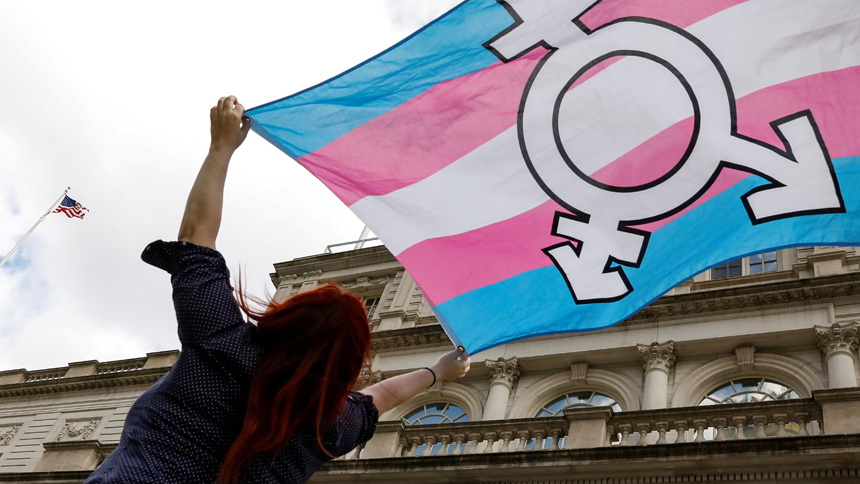 Above: A person in New York City holds up a flag Oct. 24, 2018, to protest a policy by the then-Trump administration to define sex as an individual's status as male or female based on traits identified at birth. (CNS photo/Brendan McDermid, Reuters)

Proposed federal regulatory changes to the Affordable Care Act will mean “woke” political correctness will trump medical and ethical considerations, likely exacerbating a nursing and physician shortage in the U.S.

That’s one assessment on the proposed revisions released July 25 by the civil rights office of the U.S. Department of Health and Human Services that could force health care workers to perform gender transition procedures; require health insurance plans to cover those costs; and likely remove federal conscience protection for those in health care who object to performing abortions.

On Aug. 4, the proposal was published by the Federal Register, opening a 60-day period for public comment that can be submitted at https://bit.ly/3vEM4Bl. The site describes alternative options for submitting comment. The last day for submissions is Oct. 3.

“If this rule is final and enforced, it really is changing the standards of care in medicine and an ideology is trumping science — this even shuts down the conversation about conscience rights,” said Dr. Tim Millea, an Iowa-based orthopedic surgeon and chair of the Health Care Policy Committee for the Pennsylvania-based Catholic Medical Association.

“This requires a debate, a debate is healthy and may be uncomfortable but is better than a mandate,” Millea told Catholic News Service Aug. 1. “To treat a patient who comes in and says, ‘I want my child on puberty blockers,’ you are not able to refuse; you are forced to refer them to someone who will.”

The CMA is a national, physician-led community of 2,400 health care professionals consisting of 115 local guilds. The association has been expecting the HHS rule changes since last April, following discovery of a 74-page legal memorandum attached to a court filing from a consortium of 30 sexual rights groups.

The document revealed that HHS wants to revise its mandates on health plan coverage and performance to include surgical abortion, cross-sex hormones, gender-transition surgeries, gender-affirming cosmetic surgeries and voice modification — along with a host of expanded services dealing with fertility treatments, contraception, abortifacients and sterilizations.

“An unscientific gender standard of care, and requiring insurance plans to pay for it, the rule will result in sterilization, loss of sexual function, removal of healthy reproductive organs, and a plethora of unnecessary surgeries and chemical interventions with lifelong consequences,” the foundation said in a statement.

The “proposed regulations threaten our ability to carry out our healing ministries, and others’ to practice medicine. They mandate health care workers to perform life-altering surgeries to remove perfectly healthy body parts,” the bishops said.

For its part, the CMA has since been working to analyze the proposed HHS rule changes in consultation with its member Catholic health care providers and including the Tennessee-based Christian Medical & Dental Associations and more recently the Baltimore-based Coalition for Jewish Values.

Millea said the situation is an “all hands on deck” moment for the CMA and its partners but that in the broader health care community there persists an “accommodation of acceptance, apathy and lack of competition” alongside the realty that individual medical professionals are too busy to read every 300-plus page document that comes along.

Unless successfully challenged, HHS may soon force all U.S. medical professionals to perform abortions, gender transition surgeries, or assisted suicide against their moral religious and clinical judgment — amounting to an assault on their rights and on their patients’ best interests, according to the CMA.

Additionally, more government intrusion into the art and practice of health care will translate into a further reduction of future medical professionals who have moral or ethical objections to abortion and gender transition procedures for example.

“If I am a high school or college kid and want to go into medicine and I realize I won’t be able to do what is right for our patients in all situations, we are going to take the best and brightest and discourage them from this career,” Millea said.

“It will become a profession with blinders that become bigger all the time; it will become a closed system with no open debate any longer,” he added.

The CMA is calling on every state legislature to enact strong medical conscience rights and religious freedom protections for their state’s health care professionals.

Closely monitoring the situation is the Colorado-based Catholic Benefits Association, which provides legal advocacy and litigation in defense of the First Amendment rights for its membership of over 1,000 Catholic employers, including 60 dioceses and archdioceses, numerous religious orders, colleges and universities, hospitals and other ministries.

Attorney Martin Nussbaum of Nussbaum Speir Gleason in Colorado Springs, Colorado, a legal firm which advises the Catholic Benefits Association, said he has begun to review the document.

He believes the association’s member health care providers will be substantially protected from the new HHS rule by the injunctive relief from a gender transition services mandate already secured in 2021 and which applies to present association members and future members.

However, unless something changes, most employers in general will be compelled to follow the proposed new HHS gender ideology, which will likely be enforced by the Department of Labor. It would have a broad cost and compliance impact on all U.S. employers and would disallow religious exemptions.

The proposed HHS regulations would apply to implementation of an ACA provision, Section 1557, which prohibits discrimination on the basis of race, color, national origin, age, disability or sex — including pregnancy, sexual orientation and gender identity — in covered health programs or activities.

“People should consider making comments, and HHS is required to look at that and respond before it issues final rule,” Nussbaum told CNS Aug. 2, referring to the chance to comment now that the proposal has been published.

He said HHS will then take some time to review public comment and then issue its final rules, which will likely differ in some areas, he added.

“The rule is very complex, but we will be reading it with a fine tooth comb, sponsoring webinars for our members and others and to educate Catholic employers and health care providers about this and assessing whether to make comments,” Nussbaum said. “But we will protect our members from these immoral rules.”

Nussbaum points out that even the HHS document points out that a markedly tiny percentage of the public would consider themselves candidates for so-called gender reassignment and even fewer will ultimately pursue drugs or procedures to go through with irreversible “gender migration,” a procedure that can result in full loss of sexual function and render a person infertile.

“It is all so unnecessary. Why would the administration cause all this tumult for the country when by their own statements it only affects less than 0.0022 to 0.0173% of people — most of whom will not even choose these surgeries, based on a California study,” Nussbaum said.

Editor’s Note: The full HHS proposal, published under the heading “Nondiscrimination in Health Programs and Activities,” can be found on the Federal Register’s website at https://bit.ly/3d0wwkJ. The site includes a link to submit comments and provides other ways to submit comments.