The Harvest: Father-son team serves a farm in crisis 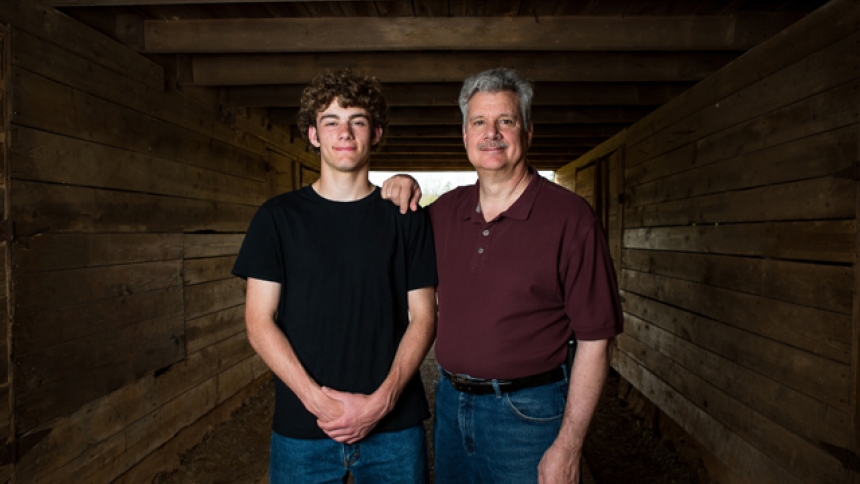 In some ways it was. In other ways? Not exactly.

Pete Giambattista, a high school sophomore, had never been on a farm in the Midwest. He’d been to his aunt and uncle’s place in Clayton, North Carolina. They have farm animals and a few acres, but nothing could have prepared him for the 5,000-acre farm he visited as a volunteer in August 2017.

Pete and his father, also named Pete, arrived in North Dakota as part of the Farm Rescue program, a non-profit organization that matches volunteers with farms in need of assistance. Oftentimes the farms are owned by farmers who have suffered an injury or illness. Other times, Farm Rescue serves farms impacted by natural disaster.

In the case of the Giambattistas, they were matched with a Midwest ranch where the farmer was preparing to undergo cancer treatment and needed help harvesting wheat.

For a week, the father-son pair from Raleigh’s St. Raphael Church worked 13-hour days. They left their motel before sunrise and made a 45-minute trek to the farm, stopping along the way at a diner for a quick breakfast.

“The people in town knew who we were … probably by our Farm Rescue shirts and hats,” the elder Pete remembered. “In the diner, people would ask us which farm we were working on … and they all knew the farmer. Someone would buy us breakfast every day.”

The father-son pair liked the traffic-free roads of their commute, the blue sky and the perfectly straight wheat rows, each a mile long, in the field. Pete and Pete absorbed the small-town farm atmosphere the way that dry summer soil takes in rain.

“The sky: it was just pretty … not a cloud during the day really,” the younger Pete said. “And at night you could see every star.”

They greeted the farmer, Mark Naaden, and his family each morning by 7 a.m. And each afternoon and evening the Naadens served them home cooked meals on the bed of a pickup truck.

“They were shocked that it was two guys from North Carolina all the way in Braddock,” the elder Pete laughed. “They wondered what we were doing there and why we volunteered. We just told them we like to do that stuff.”

The Giambattistas have a long record of service, which they’d shrug off as no big deal to anyone who mentioned it. The elder Pete organized the St. Raphael Church fair for years. The younger Pete, a Boy Ccout, volunteered at Catholic Parish Outreach, a Raleigh food pantry, and for his parish as an altar server.

“They quietly serve their community … they are in the background, but in a good way. Pete, Barbara [the wife/mother] and Pete are a family that gets things done without fanfare,” fellow parishioner Jim Veno, who has known the Giambattistas for more than 20 years, said.

Pete, 58, a retired police officer turned evidence technician for the State Bureau of Investigation, and Pete, 16, a travel ice hockey and high school lacrosse player, brought that can-do attitude they formed in North Carolina to the farm, where they were often called upon to work together.

The younger Pete helped to drive a John Deere combine, a machine designed to harvest grain crops. His father drove a tractor that pulled a wheat trailer.

As the son’s combine filled to its capacity of 500 bushels, the dad would arrive in the tractor to help. Together they progressed at a speed of fewer than 10 miles per hour.

“The combine lights automatically … revolving lights on the top,” the elder Pete said. “It would tell me when to get close, and I would drive alongside it. There’s an arm that would come off the combine that Pete would open up and then I would have to get within two or three feet while we’re still rolling. We don’t stop. And when he dumped his 500 bushels into my trailer, I’d turn around and go out in another truck that would take it to the grain mill.”

The younger Pete, who was 15 at the time, worked with constant focus. As he drove the combine, with help from someone from Farm Rescue, he had to scout for hills because even small hills could disrupt the task.

“In the combine, it’s so high up that the hills felt big,” he said. “The grain head, it was 50 feet, would automatically turn left or right depending on the hills … and it wouldn’t automatically come back to normal. You’d have to turn the steering wheel or turn the head according to the ground. Otherwise, you could drive into another row and mess it up or break the head.”

The older Pete would sometimes talk with the farmer. Conversations weren’t long, but they were revealing.

“He mentioned that he had cancer previously and that it had come back. He said it was stage four and that he fought it before and he was going to fight it again,” Pete said. “You could see it on the family’s faces. [The cancer was] on their mind. You know they’re thinking about it.”

The experience of serving on a farm, meeting the family and working with the folks from Farm Rescue taught the Giambattistas lessons in humanity.

“Here, at home, we all have friends, and you think what’s happening is so important,” the younger Pete said. “But when you go out there [to the farm] … it shows you how many people are out there who need help, and you just do your best and try to help them.”

“And you think of their struggles,” the older Pete added. “Because, you know, Mark [the farmer] he had to take care of that farm, and it was huge. Him and his son. No employees.”

The Giambattistas saw faith in action in people involved with Farm Rescue and the North Dakota community members who pitched in during the day and hauled wheat, hauled hay and loaned trucks.

Interestingly, on their trip from the airport to the motel that first day, they spotted an open field with a large metal cross and stones functioning as seats. Both of them were drawn to its uniqueness and curious about its origins.

During their stay they met the farmer’s father, a farmer himself, who had suffered a stroke and built that “Cross on the Prairie,” as he called it, to show his thankfulness to God.

The lessons that Pete and Pete can share are many, and they’re as numerous as the funny stories about a seven-year-old boy – and his pet frog – they met, truck windshields cracked by rocks and birds and the time that one of the fellow volunteers asked the younger Pete to stand behind the combine, where he sprayed him with wheat dust from head to toe.

“I was proud of my kid to want to go out there and do all that good stuff. He got along well with everybody,” the older Pete said. “And, if you will, he showed me he was a man and could help out. They were pretty adamant about him being mature enough to show up and work around equipment. I never thought he’d be driving that combine on the second day!”

It’s an experience they hope to relive again next summer, although it will likely be on a different farm and maybe during a different time during the crop cycle, such as seeding or spraying.

Before they left the farm, the farmer left the elder Pete with one thought.

“He and his family were just wonderful about teaching us and explaining about the wheat,” Pete said. “Mark said, ‘One day maybe the wheat you harvested from that field will be in your bread.’ It was interesting. I would have never thought that myself.”