The Gift of Catholicism 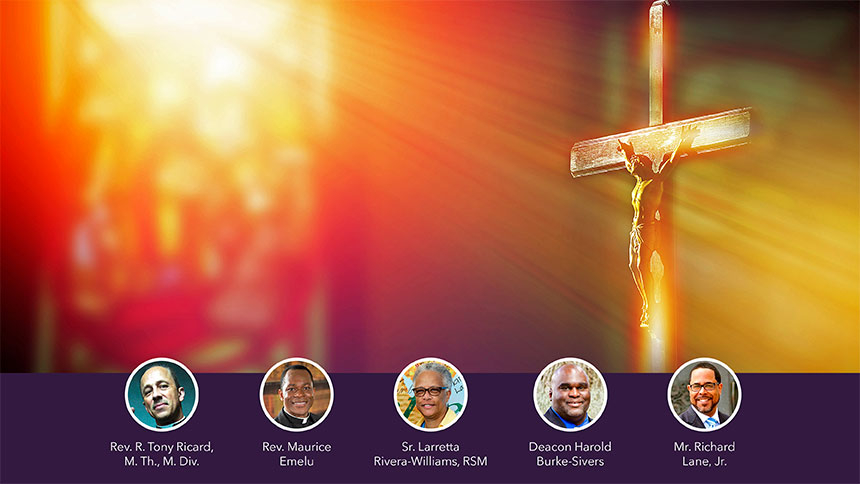 The Gift of Catholicism, an online symposium from the Diocese of Raleigh, is designed specifically for those with the mind and heart for Christian unity. This symposium will feature a collection of gifts from renowned Catholic speakers.

Talks from the speakers will be available on this page from Nov. 6-30, 2020. Watch the talks below or in this YouTube playlist, which features all of the talks.

"From Every Nation, Race and People, God's Name is Glorified"

Have we forgotten that the Church is universal? Sometimes here in the United States we may have a narrow view of the Church. What we may fail to realize is the apostles and the early Church took their evangelization serious and went into all corners of the earth. Join Father Maurice as he opens our eyes to the Church universal and offers us a call to action.

Reverend Maurice N. Emelu is a Catholic priest from the Diocese of Orlu in Nigeria. He was host, executive producer, and producer of two weekly television series for the Global Catholic Network, EWTN, in addition to creating numerous different programs for the same television network. In addition to numerous research and educational publications, he has published four books. Father Emelu has a unique call to share healing words of God's love to all people and a mission to remind us of the hope that lies ahead while learning from past and current experiences, animated by Christ-centered words.

Psalm 84 reminds us that God lives among His people. As Christians we have been gifted with so many sacramentals that it is almost impossible to not know that a loving and active God is with us. Sister Larretta encourages us through these challenging times of COVID-19 restrictions, the informal way of attending Mass on the internet, and the problems in today's society to hold fast to our hope.

Sister Larretta Rivera-Williams, RSM, a native of Winston-Salem, North Carolina, currently serves as coordinator of pastoral care at St. Leo the Great Catholic Church in her hometown. Since entering the Sisters of Mercy in 1982, Sister Larretta has shared her gifts as an elementary, secondary, and divinity school educator as well as, writer, and producer, director and choreographer of plays. Prior to her ministry at St. Leo, Sister Larretta was an associate chaplain at Wake Forest University in Winston-Salem.

“Your Sins Are Forgiven: The Sacrament of Reconciliation in the Life of the Church”

Deacon Harold Burke-Sivers – known around the world as the “Dynamic Deacon” – is one of the most sought-after speakers in the Church today. He is a powerful and passionate evangelist and preacher, whose no-nonsense approach to living and proclaiming the Catholic faith will challenge and inspire those who hear him.

Mr. Lane utilizes Negro Spirituals to teach us the five keys to trusting in our loving God. Be inspired to persevere through the pain and sadness so we may endure in peace and remain focused on our purpose. Praise be to God!

Mr. Richard Lane converted to the Catholic faith in 2003. Born in Detroit, Michigan, to Mary O. Alexander, a retired educator for the Highland Park School system, and the late Dick “Night Train” Lane, a National Football League Hall of Fame cornerback. He attended Morehouse College in Atlanta, Georgia, and served honorably for nearly six years in the United States Army Military Police Corps. In early 2005, Mr. Lane was led to begin proclaiming the Gospel as a street corner evangelist, sharing the Word of God, passing out Bibles, crosses and other religious items. Since that time, he continues to be featured in the national media on “Catholic Answers Live,” Ave Maria Radio, and Relevant Radio as well as Protestant Radio.

Mr. and Mrs. Lyke present the five pillars to a healthy and happy sacramental marriage, based on their book "Marriage On A Lampstand." The Lykes explore a new paradigm for modern Christian marriage, which seeks to answer the question, "What do marriages need to thrive?"

Andrew and Terri Lyke are pioneers in Catholic marriage ministry. In 1994, they established Arusi Network to govern their ministerial work. The mission of their ministry is to strengthen the institution of marriage in the African-American community. The focus of that work is in marriage education, spiritual formation and ongoing social support through outreach from faith-based communities. They facilitate retreats, workshops, relationship coaching, and parish consultations to raise our sights on how we, the body of Christ, live in the Light of God's grace through the Sacrament of Holy Matrimony. Highlighting the symbiotic relationship between the couple and the community, they promote an "African worldview," recognizing the "I" in the "We" for the mutual support between marriage and community. Their book, Marriage On A Lampstand: Exploring a New Paradigm for Modern Christian Marriage (Heavenly Light Press), offers foundations and a blueprint for marriage faith formation for couples and their faith communities.

Father Tony along with two young men, Taryn Sykes and  Warren Stevens, of St. Augustine High School (one of the most prestigious institutions in the United States of America) reflect on some of the toughest issues that are currently plaguing our society. It is their hope that, one day, much of what is discussed will be eradicated from our society by dedicated people of God. You can purchase the book their presentation is based on.

Reverend R. Tony Ricard, M. Th., M. Div., is a Catholic priest for the Archdiocese of New Orleans, the pastor of St. Gabriel the Archangel Parish and campus minister at St. Augustine High School in New Orleans. Father Tony holds a Bachelor of Science degree in elementary education from Loyola University in New Orleans, a Master of Theology degree from Xavier University of Louisiana’s Institute for Black Catholic Studies and a Master of Divinity degree from Notre Dame Seminary. He has given keynote addresses, retreats, revivals, and youth talks across the nation and throughout Canada.