Feast of Our Lady of Guadalupe 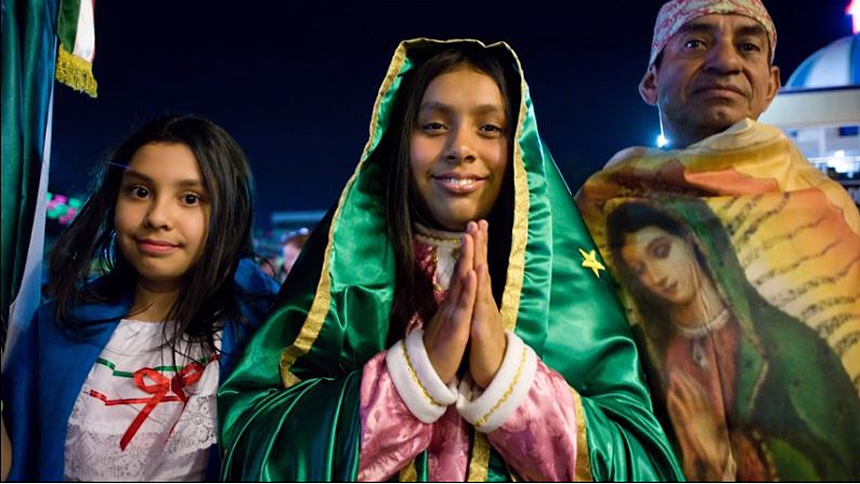 On December 12, Bishop Luis Rafael Zarama will celebrate Mass for the Feast of Our Lady of Guadalupe at Holy Name of Jesus Cathedral at 7:00 p.m. All are invited.

In this video, Father Bill John Acosta-Escobar, pastor of Saint Catherine of Siena, explains why we celebrate the Virgin of Guadalupe:

On December 12, Catholic churches throughout the Western Hemisphere celebrate the Feast of Our Lady of Guadalupe. In what began primarily as a religious feast day in Mexico, the day is now celebrated in countries throughout Latin America and in the United States. In 1945, Pope Pius XII proclaimed Our Lady of Guadalupe “Queen of Mexico” and “Empress of the Americas,” a position re-affirmed by Pope John Paul II and Pope Benedict XVI.

The feast of Our Lady of Guadalupe commemorates the appearance of Mary to Juan Diego, a poor Mexican laborer, on Dec. 9, 1531. When Mary appeared, she identified herself as the Mother of the True God, Creator of all things, and asked Juan Diego to request the Bishop of Mexico to build a church on the site of the apparition. The Bishop at first hesitated, telling Juan Diego he would like to see a sign from the Virgin Mary.

Three days later, she again appeared to Juan Diego, sending him to the top of the hill to gather an assortment of roses miraculously blooming in mid-December. Juan Diego placed the flowers inside his tilma, a poor quality cactus cloth, and went back to the Bishop. Standing before him, Juan Diego opened his garment. As the roses fell to the floor, they revealed an image of the Holy Mother on the tilma.

The Bishop was convinced and built the first sanctuary in 1533. The current Basilica of Our Lady of Guadalupe was built in Mexico City in 1976. According to a website dedicated to Our Lady of Guadalupe, an estimated 10 million people visit the site every year, making it the most popular Marian shrine in the world. Juan Diego was canonized a saint by Pope John Paul II in 2002, with his feast day celebrated December 9.