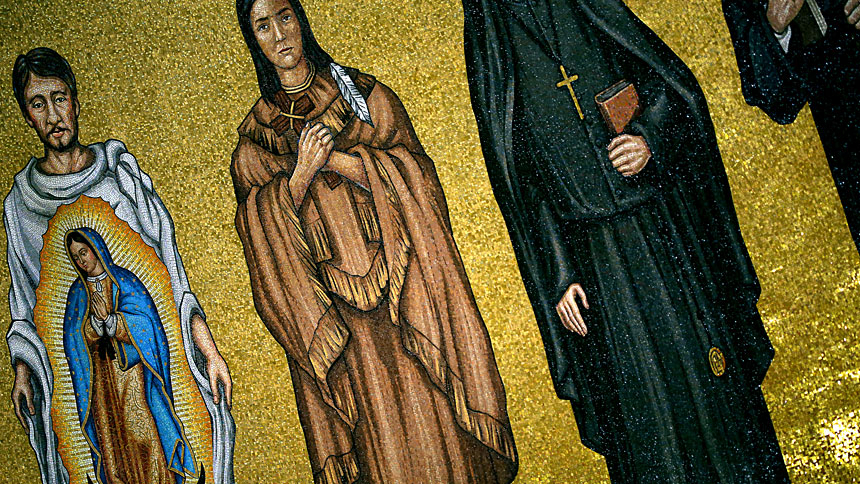 Above: Mosaic tiles depicting St. Juan Diego and St. Kateri Tekakwitha are seen in the Trinity Dome at the Basilica of the National Shrine of the Immaculate Conception in Washington. (CNS photo/Tyler Orsburn)

The 81st Tekakwitha Conference, which honors the life of St. Kateri Tekakwitha, was to be held in Raleigh this year. Because of the pandemic, however, the annual conference was changed and adapted for online participation. Raleigh was rescheduled as host city in 2024.

According to its website, the conference is the “voice, presence and identity of indigenous Catholics in North America under the protection and inspiration of St. Kateri Tekakwitha.”

Terrie Baldwin, coordinator of adult faith formation for the Diocese of Raleigh, attended a Tekakwitha Conference last year in Ohio and came home with an appreciation for the saint and Native Americans, as well as a better understanding of cultural issues for Native Americans in the world today.

“I was struck by the humility of the Native American people and how it stems from the spirituality of St. Kateri,” Baldwin said. “She loved to pray the rosary. She was very humble, and she spent the good portion of her life being sick. Particularly in these COVID-19 times, many are praying through her for healing in the world because she lived through the smallpox epidemic of the 1600s. It left her disfigured and half blind, and many of her family members died.  That’s why people are relating to her at this time.”

According to Baldwin, the Diocese of Raleigh is home to Greenville, Rocky Mount, the Outer Banks and Lumberton, all of which are home to Native Americans. And many belong to the Cherokee Nation that’s in the Charlotte Diocese, she added.

When asked how she believed St. Kateri would see the world today, Baldwin replied: “If I had to look through St. Kateri’s eyes, I would say she would see a world in need of hope and healing and deeper faith in Jesus Christ. Through prayer. And I think she would see the need to work locally on the needs that face Native Americans, including matters of race and ecology.”

Father Marcos Leon, administrator for the Native American Catholic Community in the diocese, has attended the conference five times.

“I learned three things – first, there are many traditions … the second thing is that spirituality is rooted in mother nature. Ecology and water are important and should be respected. The third part is about the sense of transcendence … the presence of God’s holy spirit guiding people every day,” he said. “St. Kateri was faithful to her Catholic faith even though it was difficult … she became Catholic when her family wasn’t Catholic. She resisted marriage for a different kind of life.”

Father, who is best known as Padre Leon, added that Raleigh is excited to welcome the conference in four years.

Access to digital conference and virtual panel on racism

Last year, the USCCB Subcommittee on Native American Affairs issued the “Two Rivers” Report, providing useful statistical data and the initial steps the Church will take to deal with concerns in the Native American community. Besides citing the gifts that the Catholic Native American communities share, it discusses the Church’s role in evangelization, the need to strengthen the schools, and to put pressure on Congress to reform federal Indian laws governing reservations. 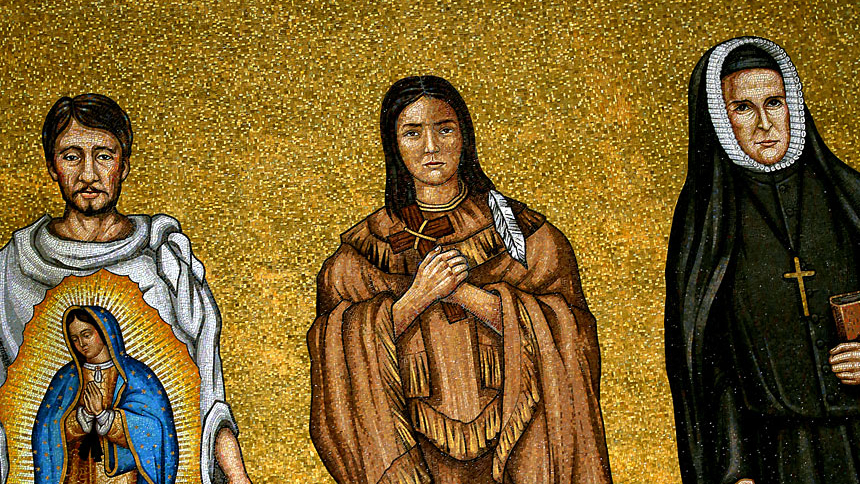 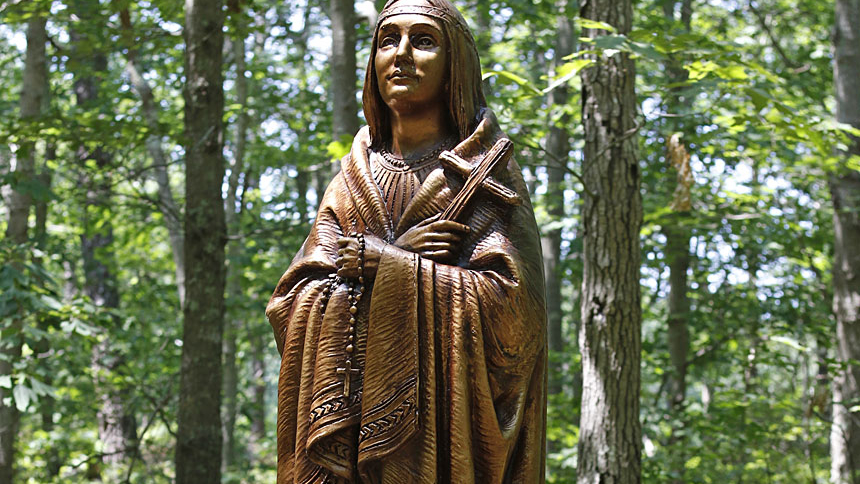