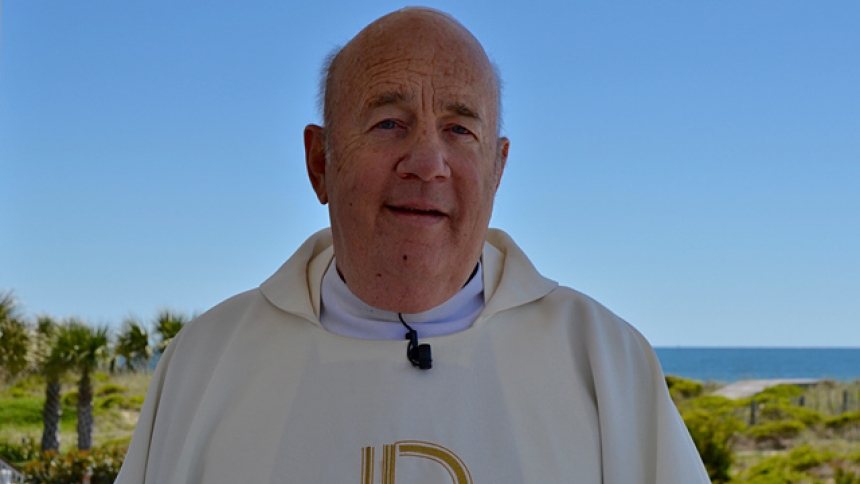 Father Joseph Gerard Vetter, a retired priest of the Diocese of Raleigh, died Monday, May 7 in Durham. He was 71.

Father Vetter, who was best known as Father Joe and signed most of his communication simply as “Joe,” was ordained to the priesthood March 26, 1973 at Annunciation Church in Havelock.

In his vocation, he served the Lord through his work in campus ministry, parishes, hospital ministry and communications.

“He was a good man and a good priest. I don’t think he would have wanted to be remembered for more than that,” Rich Reece, former NC Catholics magazine editor, said. “But he was a visionary; he anticipated decades ago the evangelizing potential of both print and electronic media, and did his best to use those opportunities to bring people to the Lord.”

Father Joe served as assistant pastor for St. Michael Parish in Cary and St. Julia (then) Mission in Siler City (1973 – 1974) and at Immaculate Conception Parish in Durham (1974 – 1976.) During his time in Durham, he also worked as chaplain at Duke University Medical Center.

From 1976 until 1981 he edited the newspaper of the diocese, The North Carolina Catholic. He went on to become director of Communications for the diocese in 1977 as well as associate publisher of the newspaper in 1981.

He served as chancellor of the diocese (1988 – 1992) and was appointed to the College of Consultors, a governing body for the diocese, in 1992. Additionally, Father Joe worked as pastor at the Duke Catholic Center (1998 – 2009) and St. Therese Parish in Wrightsville Beach from 2010 until his retirement from priestly ministry in June 2017.

Father Joe reached out beyond the circles of the Catholic Church. Early in his vocation, he served on many boards, such as Creative Ministry Associates in Durham, Carolina Counseling Center in Raleigh and Chaplain Associates of Wake County.

“He was very ecumenical and very much interested in reaching out in the community,” Monsignor John Wall, a longtime friend and fellow diocesan priest, said. “He was open, collegial and he listened to people. He was gracious with them … and he did his best to get lay people involved in the Church.”

In the 1980s he was a member of the Governor’s Task Force on the Electronic Town Hall, as well as the N.C. Council of Churches and, later in the ‘90s, the City of Southport Human Relations Commission and the Drug Abuse/Prevention Wellness Advisory Board for Brunswick County Schools.

He was active in Catholic communications at the national level for both news and public relations.

“I came to know him when he was chancellor and was key in hiring me as director of communications,” Frank Morock, who worked for the diocese for two decades, said. “I soon came to discover that Father Vetter was well-known and highly regarded in the national Church for his vision on how to utilize the technology to enhance the mission of the Church. It was inspiring to hear communications experts from other dioceses speak so highly of him. He was so well thought of that the U.S. Communications Directors Association awarded him the President's Medallion, its highest honor.”

During Father Joe’s time as editor of The North Carolina Catholic newspaper, which was weekly at the time, he wrote honestly about tough issues that faced the Church. His editorials often invited people to reflect and respond.

“It is not the purpose of our newspaper to print only articles which all our readers will readily accept. In fact that is not possible. Despite what some outsiders think, we all know that the Catholic Church is no monolith. Nor is it supposed to be,” he wrote. “We need a newspaper in which we can share views with one another in the spirit of Christian love and understanding. We can all learn from one another. If we wait until the answers to difficult questions become clear before we address them there will be no progress.

“We take a risk every time we express a thought or print an article or picture,” he continued. “Perhaps we will change our mind tomorrow. Perhaps our work will be misunderstood. [But we should have] the courage to speak out … to discuss issues.”

Father Joe was born Joseph Gerard Vetter on February 1, 1947 in Greensboro to Raymond Edward Vetter and Regina Dolores Murray Vetter. He grew up alongside siblings Marie, David and Rita.

He attended Blessed Sacrament School in Burlington and graduated from Asheville Catholic High School, St. John Vianney Hall, in Asheville in 1965. He received his B.A. in Philosophy (1969) and Master of Divinity (1973) from the Pontifical College Josephinum in Columbus, OH.

According to Monsignor Wall, Father Vetter’s upbringing was beneficial to his ministry in his home state.

“He had this particular gift. He was raised in North Carolina, so he had a background of real strong knowledge of the people of North Carolina,” Monsignor Wall said. “He could relate to all. He was a native.”

Monsignor Wall said that Father Joe also possessed a gift of “knowing” and was interested in serving the poor and those “on the periphery.”

During the last week of Father Joe’s life, as he lived with leukemia, representatives from those two organizations gathered May 2 with him and a small group of his family members and friends, to honor him and continue their work in Durham.

Catholic Charities of the Diocese of Raleigh is set to open the Durham Community Food Pantry later this year to help fight food insecurity in that city, which experiences a one million pound food shortage annually.

Within that food pantry will be an office suite named the Reverend Joseph G. Vetter Family Enrichment Center, sponsored by the A.J. Fletcher Foundation.

“It was a special day. When people talked about the food pantry, you could see the happiness in Father Vetter’s eyes,” Lisa Perkins, executive director of Catholic Charities, said of the announcement. “I think he was a little emotional. It was really a time of sharing stories, laughing and having the people closest to him with him.”