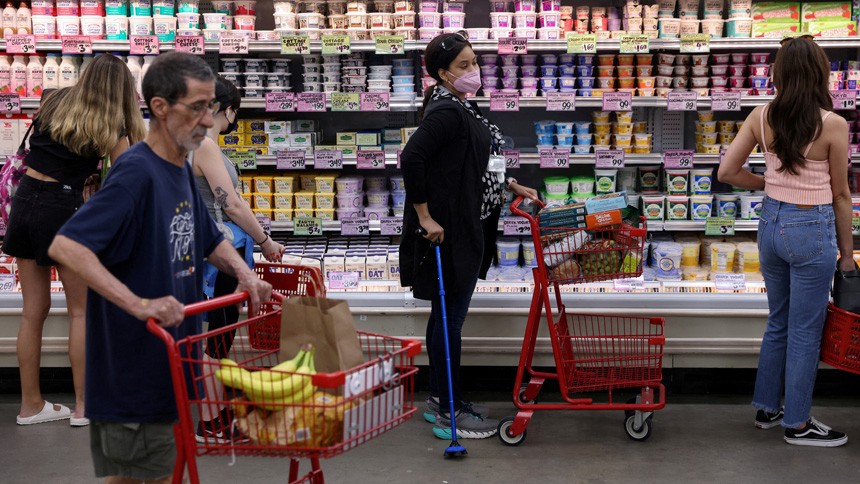 Above: People shop in a New York City supermarket June 10, 2022, as the nation faced higher food and other consumer prices due to inflation. (CNS photo/Andrew Kelly, Reuters)

"Our clients, they are overwhelmed with how much everything has gone up. Even people who are receiving food stamp benefits are coming to our pantry," said Ortiz, director of the agency's Crisis Assistance and Self-sufficiency Services Department.

The evidence is in the numbers.

In 2021, Ortiz said about 250 families visited the agency's Choice Pantry each month, choosing the type of fresh fruit and vegetables, staples, meat and dairy they need. This year, she tallies 800 families a month coming to the pantry that is open Mondays through Thursdays each week.

A network of five smaller pantries in outlying areas of the Diocese of Corpus Christi is seeing more clients this year as well, Ortiz said.

She explained how she spends additional funds -- as much as $600 a week -- to meet the increased demand. And for every delivery from the regional food bank a mile or so away, there's now a $25 delivery fee tacked on.

Whether in southern Texas or elsewhere, those who provide food to people in need report seeing more low-income working families and senior citizens seeking assistance. They are hearing from people who are having to carefully choose how to spend their limited financial resources.

Food pantries and meal programs are providing a bridge to individuals and families who also are facing higher costs for housing, utilities and fuel for their vehicle.

For the 12 months ending in June, consumer prices were up 9.1%, the most since 1981, according to the Bureau of Labor Statistics.

Utilities also rose during the period, with electricity up 13.7% and natural gas up 38.4%.

Motor fuel, including all types of gasoline, have shown the highest increase among consumer costs, rising 60.2% in the past year. Gasoline prices nationally in July fell 34 cents from their all-time peak in June to $4.66 per gallon, U.S. Energy Information Administration data show. The cost of gas has remained above $4 per gallon since March, the longest period in U.S. history.

Such inflation is a concern for Anthony Granado, vice president of government relations at Catholic Charities USA. He is working with members of Congress and their staffs to ensure that adequate funding for social services, especially food and nutrition programs, are included in appropriations bills for fiscal year 2023 currently being debated.

"We anticipate food will continue to rise. Now is not the time to cut programs that serve working people and low-income people who are fighting with continued high gas prices and high food costs," he said. "Ultimately, the people who have the least amount of money are going to feel the brunt of this."

Illustrating his concern for inflation's impact on families and food banks is the experience of the distribution network operated by Catholic Charities of Brooklyn and Queens in New York.

"Normally what we would spend in a month we are now spending in two weeks on food to support our pantries, said Debbie Hampson, senior director of community outreach services.

The operation saw a 1,000% increase in clients in spring and summer 2020 as the coronavirus pandemic exploded. Client numbers dropped in 2021, but not to pre-pandemic levels, and then began increasing again this year paralleling the rapid rise in food prices, Hampson said.

"They're using our pantries as just an extra resource," she said. "We're seeing an increase in working families. It's people who started coming at the beginning of the pandemic and they stopped coming once they were reemployed. Now they know about us, they're coming back again because they need a supplement."

Both would like to see stronger support for food programs, especially during a time when inflation is at its highest rate in four decades.

More families also are visiting Blanchet House in the Old Town neighborhood of Portland, Oregon. Rather than distribute food, Blanchet (pronounced blan-shay) House provides meals to people, especially those who are homeless or living in single-room apartments.

The charitable agency was founded in the post-World War II years by students from the Holy Cross-run University of Portland inspired by the Catholic Worker Movement. It is seeing families driving from farther away for meals, Scott Kerman, executive director, said.

"We're seeing families with young people at a rate unheard of before the pandemic. There are not a lot families in this district," he said.

Housing costs in Portland have "gone crazy," Kerman said, leading people to seek services that can help address rising expenses. "It speaks to their need."

Beyond inflation, supply chain blockages and labor shortages are affecting the ability of the Ohio Association of Food Banks, which represents the state's 12 Feeding America food banks and 3,700 hunger relief agencies, including Catholic-run programs.

The overall impact has led to the cost of food to rise from 42 cents per pound to $1.04 per pound, said Lisa Hamler-Fugitt, executive director. She has called on the Ohio Legislature to provide additional funding for food bank services because low-income and working-class people are being "further economically brutalized."

"Families turning to us are citing their income," Hamler-Fugitt told CNS. "For those who are working, while they may have seen a modest increase in wages it's been completely eaten up by higher housing and food costs."

Senior citizens, too, are feeling the impact of inflation. Hamler-Fugitt said she has heard from colleagues throughout the state that seniors are turning to food banks as they face rising energy costs and, for those owning their own homes, higher property taxes.

"I'm hearing a lot seniors say, 'I am eating one meal a day,'" she said. "There's a lot of fear. I don't think I've ever heard this amount of anxiety and fear, fear that 'I'm going to end up homeless. I'm going to end up destitute.'"

Despite the immense challenges, providers such as Hampson in New York are not planning to reduce food purchases in a time when the need is growing in the face of high inflation. And their clients know it.

"That's what people are telling us at the food pantry: 'Thank you for being here. It's good to have the extra help,'" she said.