Faith must identify with those who suffer, pope says at Mass 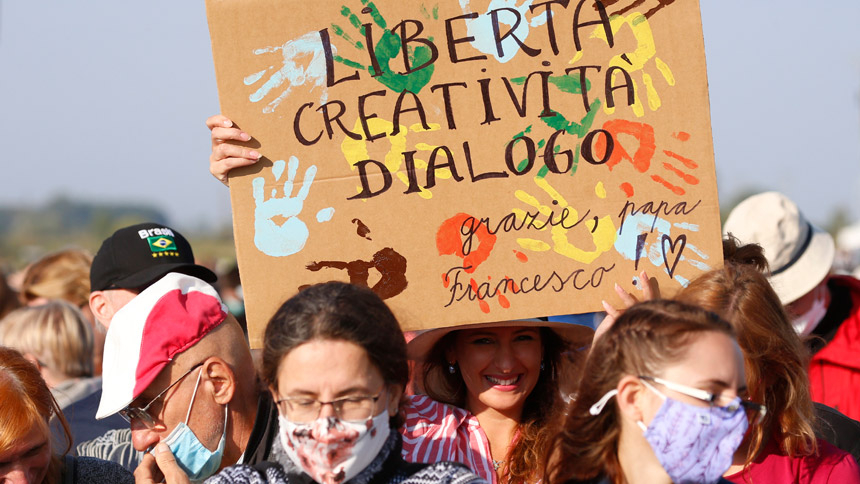 Above: A woman holds a sign in Italian reading "Liberty, Creativity and Dialogue" as people wait for Pope Francis' arrival to celebrate Mass on the fields outside the Basilica of Our Lady of Seven Sorrows in Šaštin, Slovakia, Sept. 15, 2021. (CNS photo/Paul Haring)

ŠAŠTIN, Slovakia (CNS) — The world needs Christians who are “signs of contradiction,” who demonstrate the beauty of the Gospel rather than hostility toward others, Pope Francis said.

Celebrating Mass on the final day of his apostolic trip to Slovakia Sept. 15, the pope said the country needed such prophets who are “models of fraternal life, where society is experiencing tension and hostility,” especially toward those who often feel unwelcome.

Slovakia needs Christians who are “bringers of the sweet fragrance of hospitality and solidarity, where personal and collective selfishness too often prevails, protectors and guardians of life where the culture of death reigns,” he said.

Following in the footsteps of St. John Paul II, who visited the shrine in 1995, Pope Francis visited the basilica privately to pray before the statue of Mary with Slovakia’s bishops, the Vatican said.

Reciting a prayer on behalf of himself and the bishops present, the pope sought Mary’s intercession for them “in the joys and struggles of our ministry.”

“Queen of the Apostles, refuge of sinners, you know our human limitations, our spiritual failings, our sorrow in the face of loneliness and abandonment: with your gentle touch, heal our wounds.” he prayed.

Thousands of Slovaks lined the streets leading to the basilica, pressing against the barricades and waving as Pope Francis drove by in his popemobile. Authorities originally intended to close streets an hour before Pope Francis’ arrival. However, they delayed the closing for another hour due to the high volume of pilgrims in attendance.

Arriving at the site of the outdoor Mass near the basilica where an estimated 60,000 faithful — most of them donning masks — welcomed him, the pope waved back and often stopped to greet children presented to him, gently patting them on their head or caressing their faces.

In his homily, the pope reflected on Mary as a “model of faith” for Catholics in Slovakia.

Despite being chosen to be the mother of God, Mary did “not consider it a privilege,” nor did she lose her humility.

Instead, the pope said, she accepted “the gift she had received as a mission to be carried out” and set out on a journey to take God’s love to those in need.

Slovak Catholics, through their veneration to Our Lady of the Seven Sorrows, have also lived their faith as a journey that “is inspired by simple and sincere devotion, a constant pilgrimage to seek the Lord.”

“In making this journey, you overcome the temptation to a passive faith, content with this or that ritual or ancient tradition,” he said. “Instead, you leave yourselves behind and set out, carrying in your backpacks the joys and sorrows of this life, and thus make your life a pilgrimage of love toward God and your brothers and sisters. Thank you for this witness!”

Mary’s faith, he continued, is also prophetic in that it shows “God’s presence in human history” even in moments of trial and suffering.

Faith “cannot be reduced to a sweetener to make life more palatable,” and the light brought forth by Christ dispels the darkness that reveals “my contradictions, my idols, my temptations.”

Lastly, Mary’s faith is also compassionate, and she understands the suffering endured by humanity. She is a mother who “dries our tears, comforts us and points to Christ’s definitive victory.”

Pope Francis encouraged Slovak Catholics to also open their hearts to “a faith that becomes compassion” that “identifies with those who are hurting, suffering and forced to bear heavy crosses.”

It is “a faith that does not remain abstract, but becomes incarnate in fellowship with those in need. A faith that imitates God’s way of doing things, quietly relieves the suffering of our world and waters the soil of history with salvation,” he said.

Before concluding the Mass, the pope thanked faithful for welcoming him to Slovakia and allowing him “to come among you and to conclude my pilgrimage in the devoted embrace of your people.”