Eucharistic processions on feast of Corpus Christi will launch revival 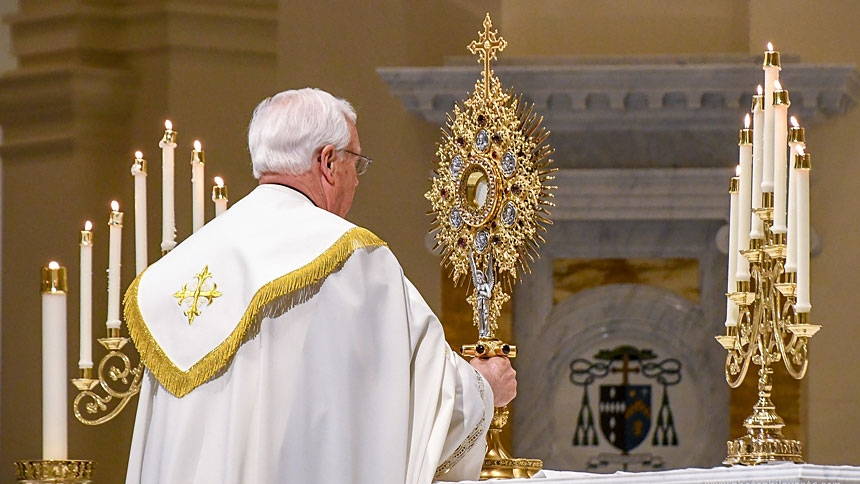 Belief in the real presence in the Holy Eucharist is waning among professed Catholics, and the U.S. bishops are trying to do something about it.

According to a 2019 Pew Research Center study, roughly two-thirds of U.S. Catholics do not believe that the bread and wine at Mass become Christ’s body and blood during the consecration — a core dogma of the Catholic faith and the “source and summit” of the church’s life, according to the catechism.

In response, the U.S. Conference of Catholic Bishops is initiating a three-year grassroots revival of devotion and faith in the real presence of Jesus in the Eucharist, culminating in the first National Eucharistic Congress in the United States since 1975. The congress will take place in Indianapolis in 2024.

On June 19, the feast of Corpus Christi, the National Eucharistic Revival will be launched with Eucharistic processions taking place in archdioceses and dioceses around the country.

In the Raleigh diocese, a Corpus Christi procession is happening June 19 on the grounds of Holy Name of Jesus Cathedral. The event, which will be held from 3 until 4 p.m., aims to “honor Our Lord and his manifold graces in the Blessed Sacrament with a Eucharistic procession.”

According to information shared in the parish bulletin, there will be four outdoor stations for the procession: the Sacred Heart statue, the St. Joseph transept, the apse and the Our Lady transept. After those stations, the faithful may process back inside for benediction and reposition.

This procession is one of many happening throughout the country.

In the Detroit Archdiocese, Archbishop Allen H. Vigneron will lead a two-mile Eucharistic procession from the Cathedral of the Most Blessed Sacrament to Sacred Heart Major Seminary.

Following these eucharistic processions, U.S. dioceses will develop parish teams of revival leaders to help their fellow Catholics reflect deeper on the centrality of the Eucharist in the life of the Church.

In the Diocese of Raleigh, leaders are discussing the potential for a local Eucharistic Congress in 2024, the same year the diocese will celebrate the 100th anniversary of its founding.

The U.S. bishops approved plans for the revival and the national congress in Indianapolis last November during their fall general assembly in Baltimore. Both are being spearheaded by the USCCB’s Committee on Evangelization and Catechesis, chaired by Bishop Andrew H. Cozzens of Crookston, Minnesota.

“We are really aware in these times that we live that the church needs to become more missionary. The culture itself doesn’t support what we do anymore as Catholics,” Bishop Cozzens said in a statement. “All Catholics are invited into a renewed encounter with Jesus Christ in the Eucharist, especially those Catholics who don’t fully understand the power of the Eucharist.”

As people are seeking deeper connection more than ever before, “this is a time not to be ashamed of the Gospel but to proclaim it from the rooftops,” he added.

Los Angeles Archbishop José H. Gomez, USCCB president, called the Eucharist “the gateway key to the civilization of love that we long to create.”

Bishop Luis Rafael Zarama, of the Diocese of Raleigh, recently spoke about Father’s Day and the Feast of Corpus Christi, which share a calendar date this year of June 19. The bishop shared a video encouraging people to accept the invitation and open themselves to receive Jesus in the Holy Eucharist.

“In every Eucharist, open yourself, completely, to that mystery of love,” he said.