Emotionally able: How hospital ministry reaches those in need 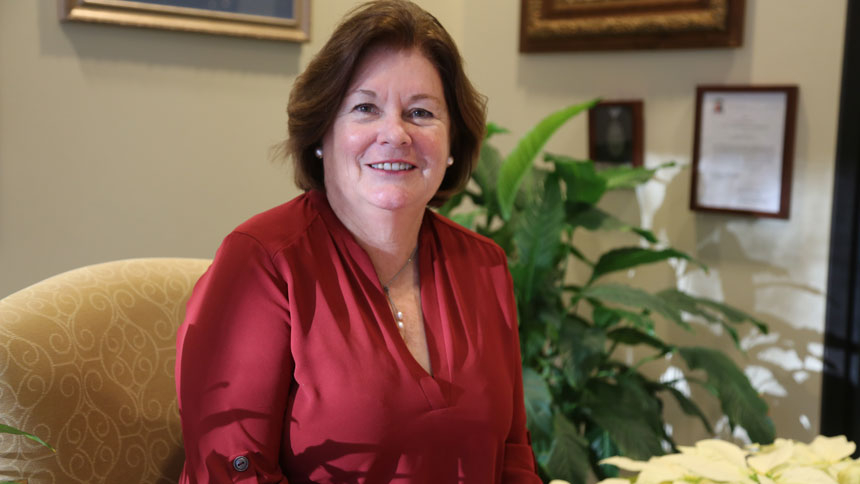 It’s been decades, but Winnie Lewis still remembers the six weeks her mother was in rehab. Her hip had broken. She needed surgery. A lengthy stint at a hospital was non-negotiable.

Lewis’ mother loved daily Mass. Even before she retired from full time work, it was a fixture in her life.

“Oh, my mother was very religious,” Lewis says, recalling that her mother was able to receive the Eucharist daily during her hospital stay. “She was a very faithful woman.”

Years later, Lewis would have a moment with her own daughter, who was preparing for confirmation and volunteering as a Eucharistic minister.

“My daughter said, ‘You need to do this. You can do this,’” Lewis says about volunteering.

It’s been 25 years since Lewis became a Eucharistic minister. And it’s been 19 years since she joined a hospital ministry group at her parish, St. Luke in Raleigh.

For Lewis, the role of Eucharistic minister and hospital ministry volunteer is tied up in her relationships with her mother, daughter and with God.

“It meant so much to my mother that I thought I would give it a try and … I was emotionally able to do it,” she says.

At least once a month she drives to Wake Med to visit patients, sometimes between 25 and 40 each visit. She offers Communion to Catholic patients. Sometimes she simply talks with the patients and their families. Sometimes the visit is about prayer.

Lewis, who leads the team of volunteers and trains new members, often meets with fellow volunteers before their shifts begin to pray, talk and strengthen each other for the work ahead.

“I know God is with me because he gives me the words to speak to the patients with,” she says. “I believe the blessed mother inspires me to do this. This volunteer ministry is not for everyone, and I understand that. I was just talking to my husband and telling him that we are all born with different gifts … I believe this is my gift. I can relate to some of the elderly patients. I can try to stay calm if somebody is being belligerent. I’m also very sensitive to the doctors and nurses.”

Lewis doesn’t shy away from talking about the heaviness of the ministry, and the seriousness that goes along with many patients’ hospital stays or end-of-life journeys.

She remembers patients who have died. “They’re always with you,” she says.

Lewis recalls the patients who are in and out of the hospital for years. The ones she gets to know well. The ones with whom rapport is built.

She prays, especially, for the nurses and doctors.

She remembers the patient who asked for a rosary. And Lewis still thinks about the young man who was “living on the edge, so to speak” and prayed with her daily during his hospital stay.

The meetings aren’t always pleasant. Sometimes patients are angry about their circumstances and will give voice to that anger.

“There was one gentleman who was belligerent. I was surprised that he still wanted the Eucharist, but the point was maybe it helped him with what he was going through,” she says.

Father Lourduraj Alapaty has been a chaplain at Wake Med since 2011. When he arrived in the diocese he was surprised at the size of the Raleigh hospital.

“They had close to 1,000 beds,” he says. “I used to lose my way on many occasions. I learned my way around in two weeks, though. I took the help of the other chaplains.”

It was important for him to have the layout of the entire hospital down because patients are everywhere, and the chaplains are some of the few personnel at the hospital who visit people everywhere.

In his experience, Catholics in the hospital are seeking the Communion they celebrate as part of their specific faith tradition.

“When I was a resident chaplain, one of my classmates who was not a priest went to a patient’s room. The patient was a Legion of Mary member … she knew our faith … and she requested Communion. My co-resident went back and got this,” he says as he holds up a small plastic bottle, divided with pre-packed liquid and a piece of bread.

“It was Protestant Communion,” he says, noting that the patient declined. “The classmate called me and said, ‘Father Alapaty, I have a question [about Communion.]’ So I took the Communion and went to the room and she came with me to see. We talked about consecration … and the real presence of Jesus.”

He still smiles when he thinks about that story. His favorite stories, though, are about patients who return to their faith after a hospital stay.

Father Alapaty recalls a time he visited a man who told him he hadn’t been to Mass in 40 years, but checked Catholic on his hospital intake forms. The patient shared the reasons why he drifted from his faith as Father Alapaty listened.

“And I asked him, ‘What would you like to do now?’” Father Alapaty says, adding that the man received the sacrament and said he would return to his faith. “This happens every now and then.”

Every now and then a patient declines the visit entirely. He once visited a patient and said the words he says at the start of most visits - “What can I do for you?”

The patient asked him to get out of the room.

“Maybe the patient was in pain or something … I think that patient was restless. I understand,” he says, noting that he offered to return if the patient changed his mind.

The patient called and eventually discussed his pain and the deaths of loved ones.

“He was detaching himself from everybody,” Father Alapaty says.

History of the ministry at Wake Med

It’s only been since Father Alapaty’s 2011 arrival that a Catholic priest has been on site at Wake Med every weekday and celebrated daily Mass there.

The chapel seats about 30, and it’s often full for 11:30 a.m. Mass. Some of the visitors are family members of patients; others are hospital staff, including doctors and nurses.

“I always thought this was blessing because Bishop and Monsignor Brockman gave permission to have [Mass and] the Blessed Sacrament here. Seven days a week we can give Communion,” Father Alapaty, who has an office next to the hospital chapel, says.

The presence of the tabernacle means that hospital Eucharistic Ministers may obtain Communion at the hospital rather than stopping by their own churches on the way to the hospital for it.

Hospital ministry at Wake Med is also bilingual. On Sundays a group of Spanish-speaking volunteers from Holy Name of Jesus Parish visit Spanish-speaking patients at Wake Med. On the other days of the week, Father Alapaty is able to meet with those who may only speak Spanish.

He’s not fluent, he says with a smile, but he knows enough of the language to pray and share the sacraments with those who need it.

A third language isn’t the only thing he’s learning. The value of a hug is on the list for Father Alapaty, who was born and raised in India.

“I didn’t know - coming from a different culture - that a hug was so powerful,” he smiles. “I mean just when somebody is in trouble. Just that little hug brings so much peace and calmness and serenity.”

In India, he says, he wouldn’t have hugged people, even family members, growing up.

“I told myself there is no culture that is stagnant. Culture changes. I always tell people the culture of Jesus is my culture. And if somebody wants to hug, I learn to be with them. Whereas in the beginning I had reservations. Today I take every situation on its own.” 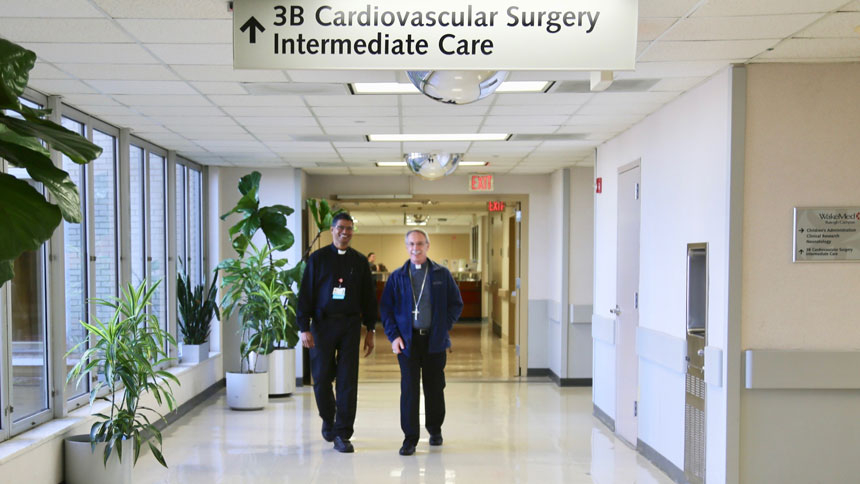 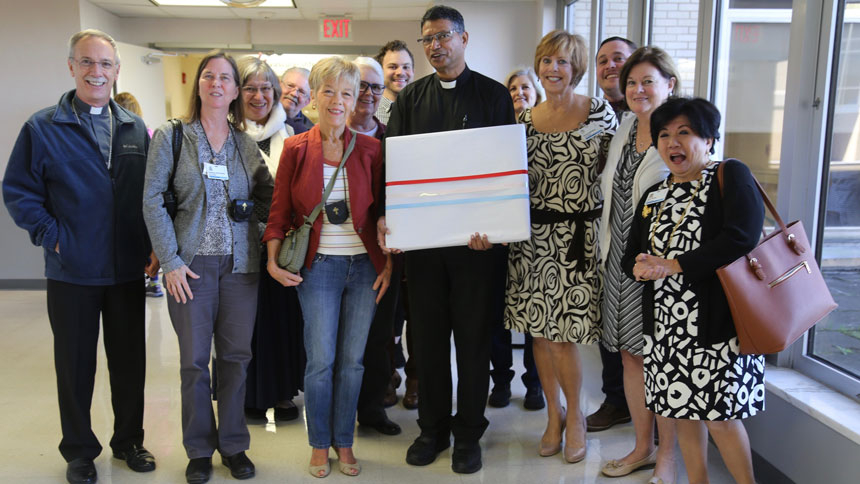 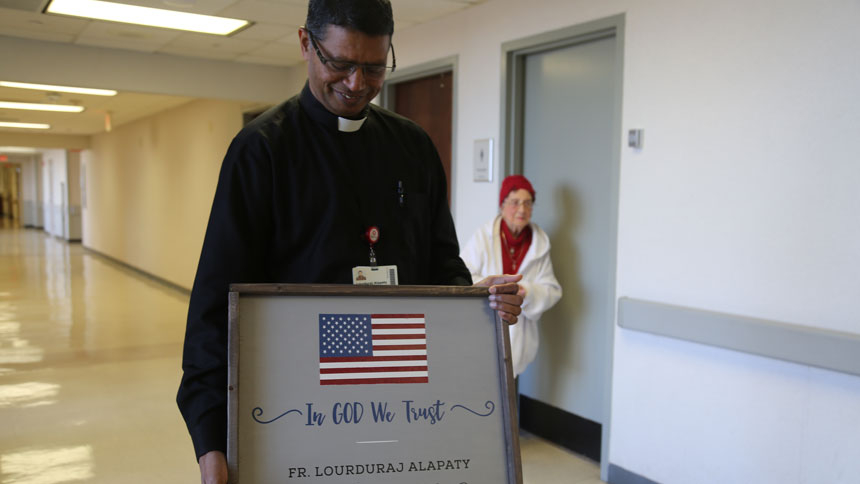 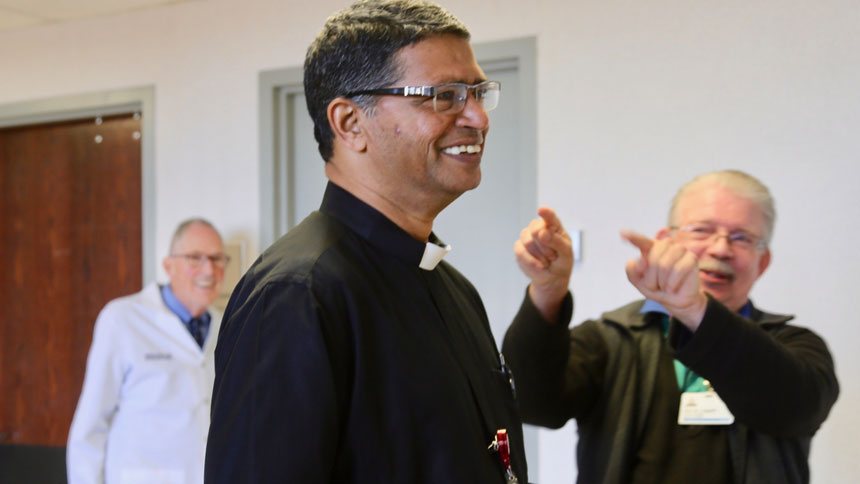 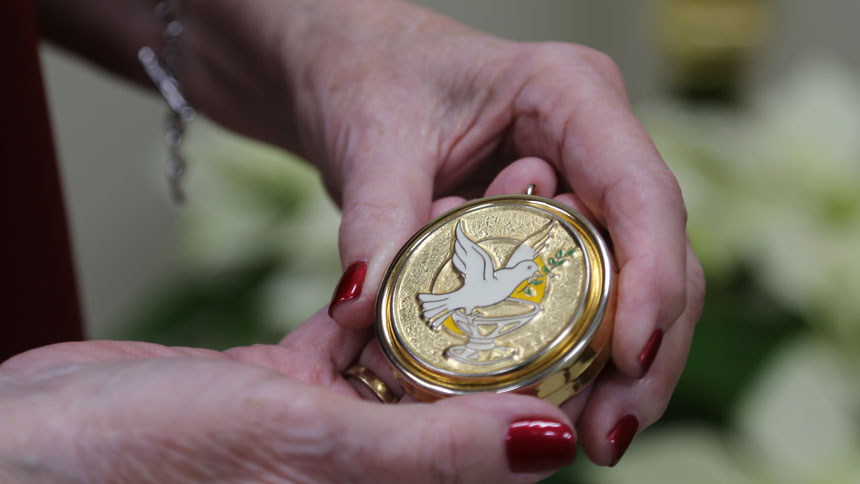