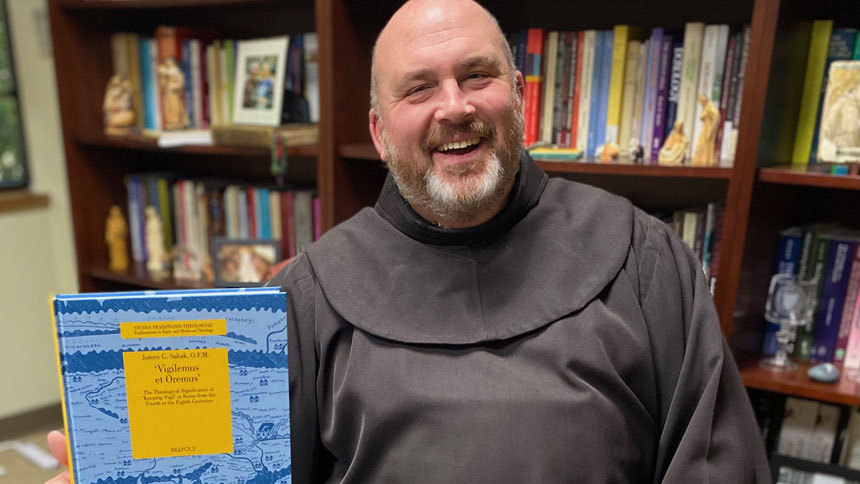 Although he frequently contributes articles to academic journals and faith-based blogs, Father Jim Sabak, O.F.M., became a first-time book author last month with “‘Vigilemus et Oremus’: The Theological Significance of ‘Keeping Vigil’ in Rome from the Fourth to the Eighth Centuries.”

The book is a journey through hundreds of years of the liturgical practice of keeping vigil in early Roman tradition and its theological significance in the contemporary Church. Father Jim, who is director of Divine Worship for the Diocese of Raleigh, hopes Vigilemus et Oremus, meaning “Watch and Pray,” will get readers to “think more authentically” of what it means to keep vigil.

“The Christian mindset of vigil anticipates a fulfillment. It moves from anticipatory and expected joy to the realization of that joy – and the biggest joy is the fulfillment of God’s promise of the Second Coming. Vigil connects us to that understanding. That’s why vigils are experiences of profound hope, and not just wishful thinking,” he explained.

The book was inspired by Father Jim’s core work for his dissertation on vigil liturgies while completing his doctorate degree in sacramental theology and liturgy at The Catholic University of America. It was the encouragement from his professors, along with his passion and determination to provide a better understanding of the Paschal Vigil (the “mother of all vigils,” according to St. Augustine), that led to converting his dissertation into a book manuscript.

“We have all these practices and traditions, yet we know very little about the precise elements which comprise a vigil liturgy and their theological significance – and, consequently, very little appreciation and understanding of their roots – how they came to be, their original intent, and their purpose in our faith,” said Father Jim.

He discovered that liturgical sources of the sixth to the eighth centuries reveal that the practice of vigils surrounding Easter, Pentecost, saints’ days and other celebrations became relatively standardized with specific Mass texts and scriptural readings assigned to each. These vigils were so important that they attracted the celebration of major sacramental liturgies – hence, the Paschal Vigil, which existed for centuries as a vigil liturgy of scriptural readings and prayers, according to Father Jim, but gradually became the setting for the annual baptismal celebration of welcoming newcomers into the Church.

“We are walking with God when we precede Easter Sunday with the Easter Vigil – which is why we baptize at that liturgy. It tells us not to lose hope and to keep moving forward with God. If we don’t listen at the vigil, all we hear [on Easter Sunday] is that the tomb is empty,” said Father Jim, who also serves as chair of the American Franciscan Liturgical Commission and is a member of the executive committee of the North American Academy of Liturgy.