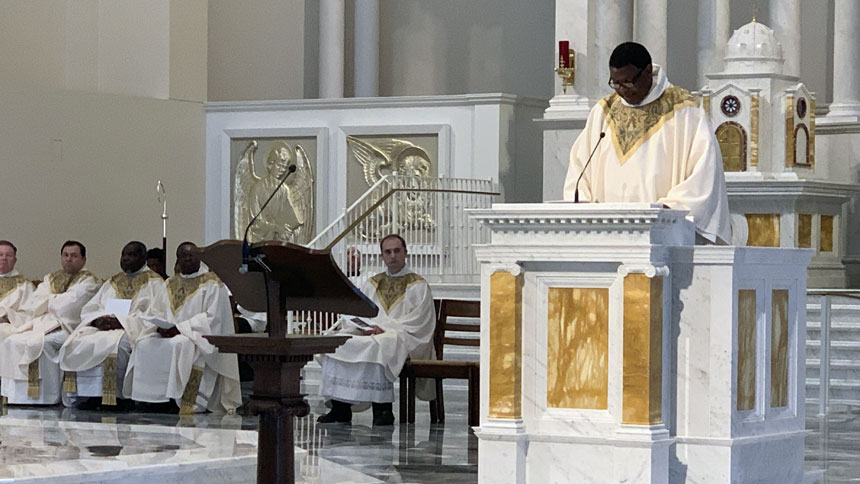 Above: Father Andrew McNair delivers the homily at the Mass for Preservation of Peace and Justice at Holy Name of Jesus Cathedral in Raleigh Jan. 20.

On Monday, January 20, many parishioners throughout the Diocese of Raleigh gathered at Holy Name of Jesus Cathedral to celebrate the Mass for the Preservation of Peace and Justice, which also commemorates the legacy of Rev. Dr. Martin Luther King Jr. The powerful homily given by Father Andrew McNair reminded all in attendance that scripture states "blessed are the peacemakers for they shall be called the children of God" and that without justice we have no peace, especially with the evil and injustice of racism.

"The fight against racism, my brothers and sisters, demands an examination of conscience," said Father McNair in his homily. “In the presence of God, we must constantly examine our attitudes, our thoughts, and our behaviors to see if they are compatible with God’s vision of the human person. This calls for an attitude of constant conversion to God’s love and his divine mercy.”

Bishop Luis Rafael Zarama also brought to the congregation's attention the many races and cultures that were present at this celebration, modeling the love Jesus calls us to in unity. Adding exuberance to the celebration were the well known gospel hymns led by a combined choir from the Raleigh Catholic Gospel Choir and the diocesan African Ancestry and Evangelization choir.

Watch video and view photos from the Mass below.

WASHINGTON (CNS) -- While the United States has "come a long way" in addressing racism and injustice, much more remains to be accomplished to achieve the dream of "the beloved community" envisioned by the late Rev. Martin Luther King Jr., the president of the U.S. Conference of Catholic Bishops said.

Archbishop Jose H. Gomez of Los Angeles urged the country to overcome still-entrenched racist beliefs and discriminatory practices in a statement released in Washington to mark the annual holiday honoring the civil rights leader, which this year falls on Jan. 20.

"We have come a long way in our country, but we have not come nearly far enough," Archbishop Gomez said in the statement issued Jan. 16 by the USCCB. "Too many hearts and minds are clouded by racist presumptions of privilege and too many injustices in our society are still rooted in racism and discrimination."

The archbishop lamented that "too many" young African American men are killed across the nation or are "spending their best years behind bars."

He called on citizens to recommit themselves to assuring that all people have equal opportunity to overcome what Rev. King called "lonely islands of poverty."

Citing "disturbing outbreaks of racism and prejudice," the archbishop raised concern about the rise in anti-Semitic attacks, displays of white nationalism and nativism, and violence against Hispanics and other immigrants.

"Such bigotry is not worthy of a great nation. As Catholics and as Americans, we must reject every form of racism and anti-Semitism," he said.

"Racism is a sin that denies the truth about God and his creation, and it is a scandal that disfigures the beauty of America's founding vision," the statement continued. "In our 2018 pastoral letter on racism, my brother bishops and I stated: 'What is needed, and what we are calling for, is a genuine conversion of heart, a conversion that will compel change and the reform of our institutions and society.'"

Archbishop Gomez urged the country to honor Rev King's memory by committing to building the "beloved community" the civil rights leader envisioned, "an America where all men and women are treated as children of God, made in his image and endowed with dignity, equality and rights that can never be denied, no matter the color of their skin, the language they speak or the place they were born." 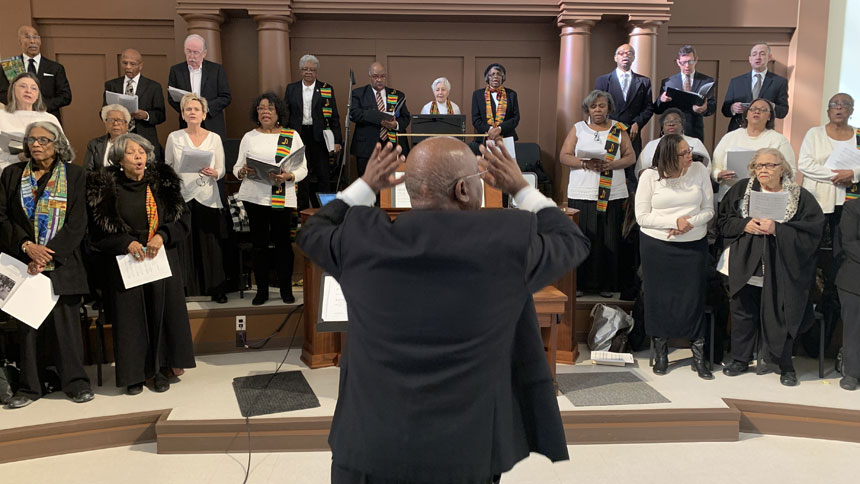 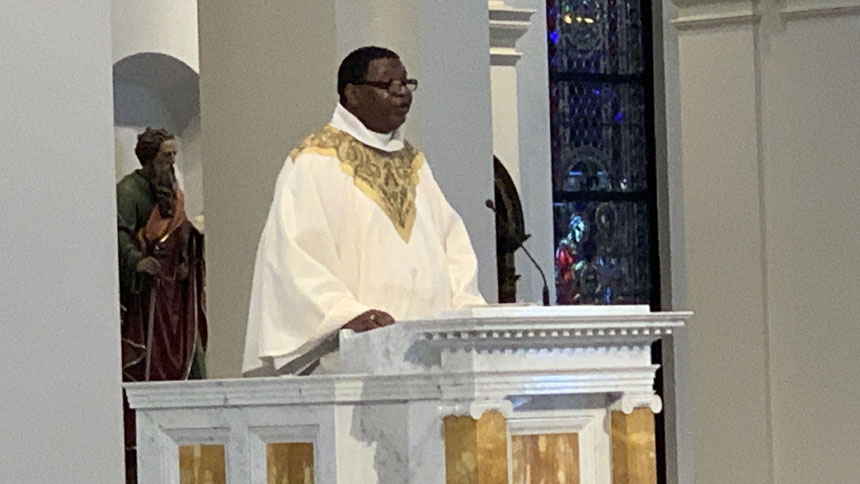 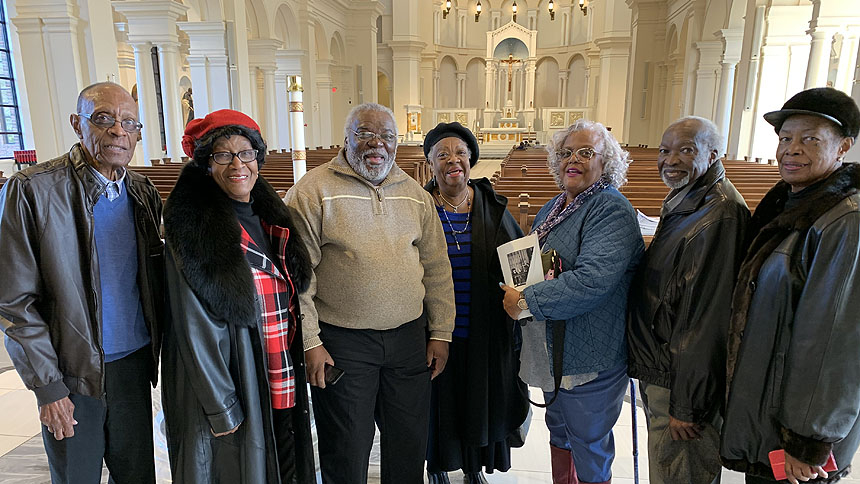 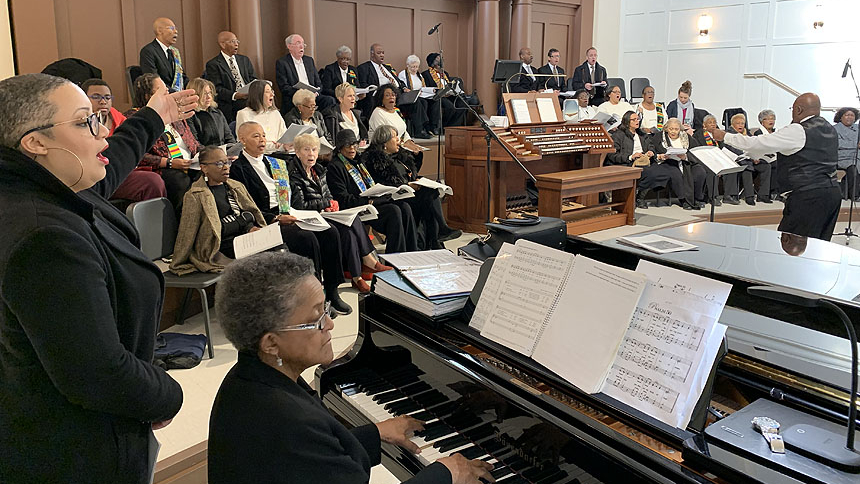 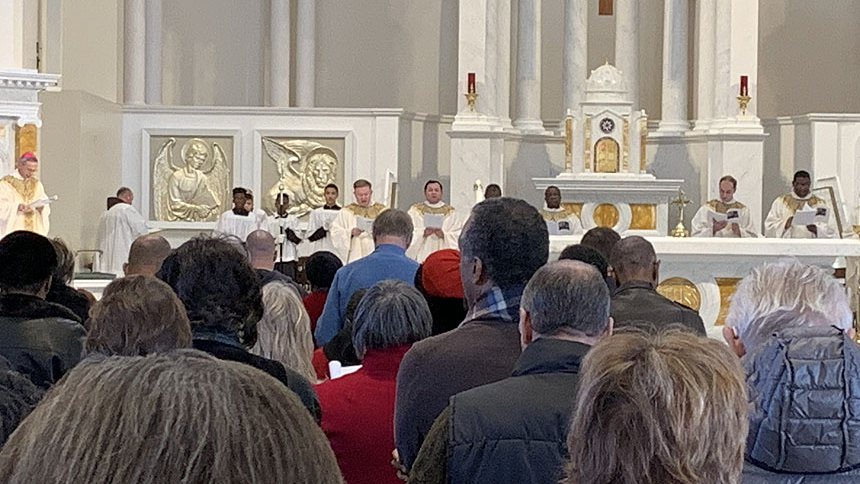 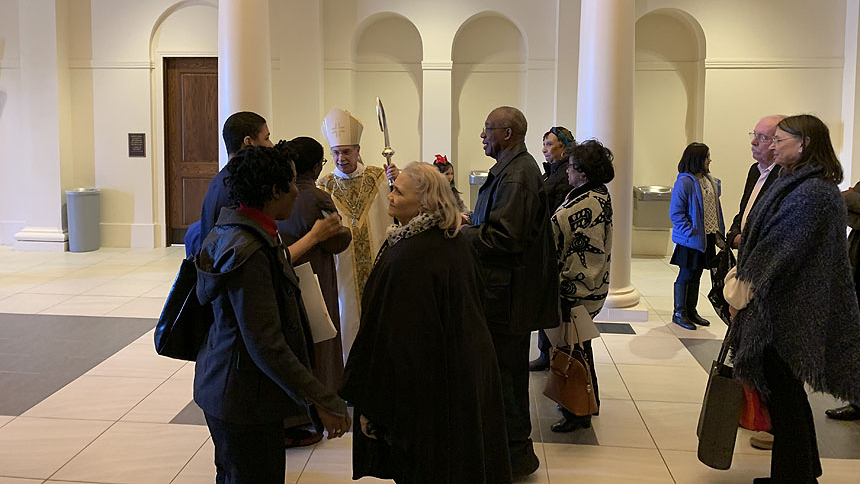