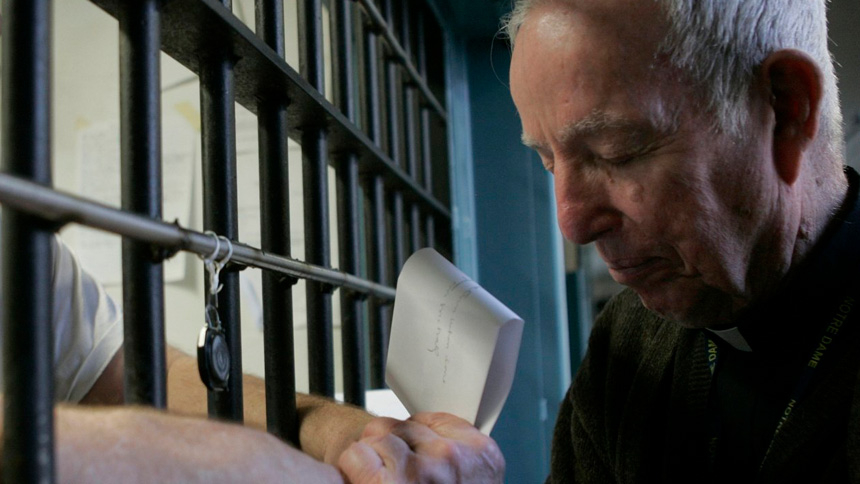 Above: A priest prays with a death-row inmate in 2008 at Indiana State Prison in Michigan City, Ind. (CNS photo/Tim Hunt, Northwest Indiana Catholic)

VATICAN CITY (CNS) -- The death penalty is an affront to human dignity that offers no solace to victims and denies the possibility for conversion of those who commit serious crimes, Pope Francis said.

The growing calls around the world for an end to capital punishment are "a sign of hope" for the church, the pope said in a video message released by the Pope's Worldwide Prayer Network Aug. 31.

"Capital punishment offers no justice to victims, but rather encourages revenge. And it prevents any possibility of undoing a possible miscarriage of justice," he said.

"From a legal point of view, it is not necessary," the pope added.

At the start of each month, the network posts a short video of the pope offering his specific prayer intention. For the month of September, the pope dedicated his prayer intention for the abolition of the death penalty.

In his video message, the pope said the death penalty was unnecessary because society "can effectively repress crime" without denying those who offend "the possibility of redeeming themselves."

The death penalty, he said, is "morally inadmissible" because it destroys life, which is "the most important gift we have received."

"Let us not forget that, up to the very last moment, a person can convert and change," the pope said. "The commandment, 'Thou shalt not kill,' refers to both the innocent and the guilty."

Concluding his prayer intention, Pope Francis called on "all people of goodwill" to rally together to end capital punishment and prayed that "the death penalty, which attacks the dignity of the human person, may be legally abolished in every country."

In 2018, Pope Francis ordered a revision of the catechism's paragraph on capital punishment to say that "the death penalty is inadmissible because it is an attack on the inviolability and dignity of the person" and to commit the church to working toward its abolition worldwide.