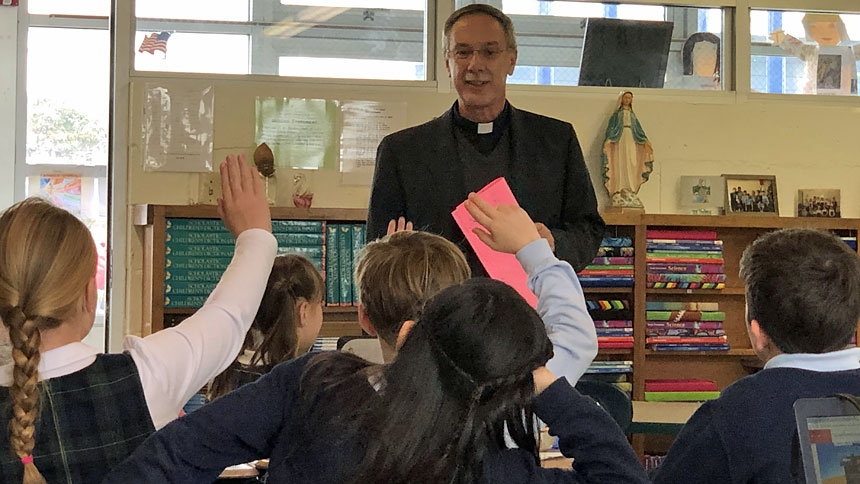 The news cycle moves quickly. And the moment of tragedy, as with Alabama’s recent tornados, becomes the months – or even years – of rebuilding. 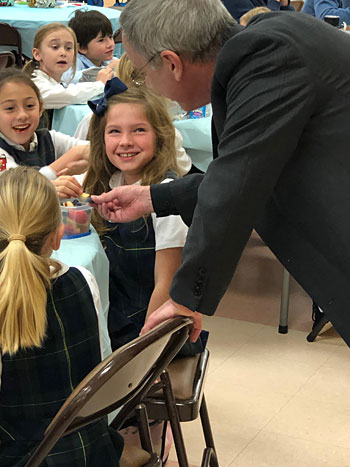 Recently NC Catholics checked in with Father Thomas Davis, pastor of St. Egbert Parish in Morehead City, to see how the community is doing after the devastation from Hurricane Florence.

From the moment the hurricane struck, the parish rectory provided safe haven to the people of Morehead City. For one family whose home was on the water, the rectory was a place of shelter the night Hurricane Florence impacted the area.

The family’s presence proved to be a blessing as the couple, during the storm, collected and drained garbage pails full of water while shingles blew away and the roof began to fail.

Reports from after the storm showed mangled steel supports and toppled structures impacted by 70 mph winds that came in from the town’s sound side. That wind caused downed power lines, falling trees and, thereby, impassable roads.

Father Davis’ nephew brought two generators to the rectory, and the priest was quick to share that gift with anyone who needed it.

“The rectory became the neighborhood station for people to charge their cell phones,” he says.

The most significant damage happened because of failing roofs. When the shingles started blowing away, there was nothing to stop the 21 inches of reported rainfall from destroying buildings all over the town.

St. Egbert Catholic School, its office buildings and the parish rectory were not spared. When Father Davis surveyed property damage with officials, he insisted that the school be taken care of first.

“We were very clear. We said we want the school first, then this office building, then the rectory,” he says.

Demolition and repair happened fairly quickly with the school, allowing students to come back to their classrooms at the same time as Carteret County schools, two weeks after the hurricane. By comparison, schools in Onslow County, where Infant of Prague Catholic School is located, took as long as six weeks to be back in session (with much work still to be done.)

Demolition is complete on the St. Egbert parish office building and workers are finishing repairs.

For the past six months employees of St. Egbert Parish, including the music director, faith formation director and others, have shared space with the school.

The final phase of rebuilding will focus on the rectory, where demolition and asbestos removal are underway.

Father Davis, who is living in a rented condo, is looking forward to getting back home, even if it isn’t perfect.

“I won’t have a kitchen, and the refrigerator will be in the garage, but as long as I have a microwave and my Keurig, I’ll be a happy camper,” he says.

Through it all, Father Davis says he’s been overwhelmed by the support of the community he lives in.

“I’ve never been so humbled in my life, as [by] the generosity of strangers. We had a parish in Houston … sent us fifty thousand dollars’ worth of Walmart gift cards,” he says.

He continued, smiling, “It’s just so humbling to be the carrier of other people’s good wishes. When they’d say, ‘who do I thank?’ I’d say, ‘I don’t know, there’s a church in Houston, there’s a church in Davenport, Iowa … lots of people read about us, saw us on the news and did something about it.”