Claire Curzan: Leading by example in the pool and beyond 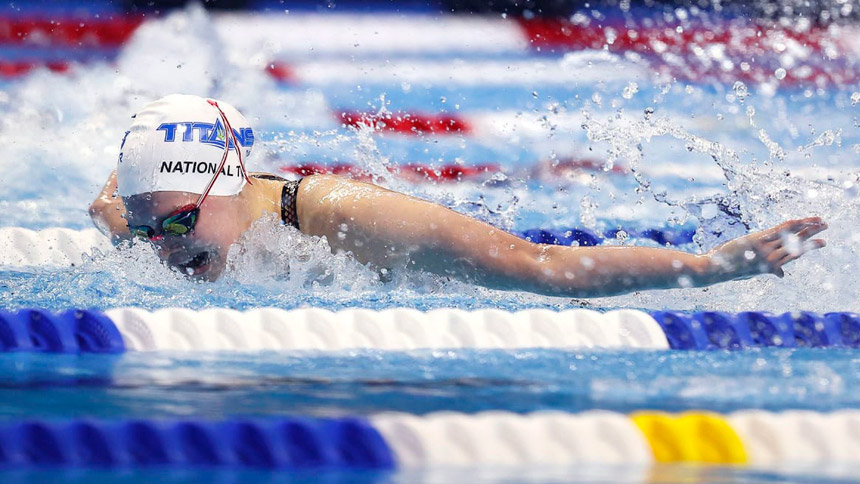 A few tiny but mighty words of encouragement for Claire Curzan as she prepares to swim in the Summer Olympics this weekend.

"On the pool deck, she is the first one to wish another swimmer good luck and with a contagious smile say, 'You've got this,'" Turner said. "I have no doubt that she will continue to lead and inspire others while representing Team USA.

The rising senior will be one of the youngest swimmers to compete in this year's games, as she aims to beat her record in the 100-meter butterfly. According to the News & Observer, a time of 56.20 seconds in April elevated her to the second-fasted American swimmer ever in the race.

"I'm literally on Cloud 9, and if there's something above it, that's where I'm at," Claire said shortly after making the Olympic team, a dream she's been eying since watching greats like Michael Phelps and Katie Ledecky as a pre-teen.

While her athletic accomplishments are well documented, Claire's academic success is just as notable. College counselor Nicole Kuhns said despite her intense training schedule — which includes swimming the equivalent of 26 miles per week — she still gives 100% in the classroom.

"Claire would have a critical race coming up to determine her ranking in the next meet, yet she would be more concerned about a grade on a quiz at that moment," Kuhn said. That type of drive and determination is hard to find.

"She truly is the model student who sets an example for not only her peers but also adults like myself."

"Claire is the epitome of integrity — she treats every single moment in the classroom with the same intensity and joyfulness that she treats every stroke in the swimming pool," he said. "She handles herself with grace and aplomb no matter the situation."

Claire's competitive streak, which she has attributed to her mother, extends beyond the pool as she pushes to grow her knowledge and understanding. Friedman said she often shared her work via Google Docs to track his edits in real-time.

"(She) then began revising and sculpting her work with surgical precision over the coming weeks, until the finished product sparkled and shone like an Olympic medal," he said.

Perhaps Claire's empathy and genuinely positive attitude leave the biggest impression on those she meets.

"... Claire's smile inspired both me and all of my second-period students to forget about the annoyances of the pandemic and embrace the essential mission of (the class) to learn more about ourselves and the world through the magic of words."

The Gibbons community will gather to celebrate Claire during an Olympic Watch Party on Saturday evening. Primetime coverage begins at 8 p.m., and we'll be streaming the action on the videoboard. Claire will swim between 9:40 and 10 p.m. if she qualifies for semi-final heats. Feel free to bring snacks, blankets, and chairs.