Church must be 'sign of unity' that comes from belief in God, nuncio says 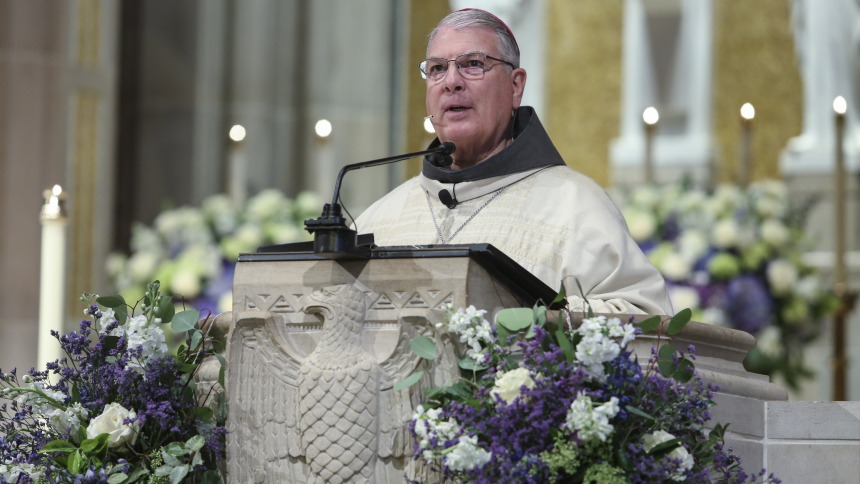 Above: Atlanta Archbishop Gregory J. Hartmayer is seen at the Cathedral of Christ the King May 6, 2020. (CNS photo/Michael Alexander, Georgia Bulletin)

ATLANTA (CNS) -- Before placing the pallium on the shoulders of Atlanta's new archbishop, Archbishop Christophe Pierre, nuncio to the United States, remarked that Archbishop Gregory J. Hartmayer is to help his brother bishops be unified.

"Especially in a society, which is divided, the church should be the sign of unity, but a unity which comes not just as a fruit of results of our own efforts, but because we believe in God," said Archbishop Pierre, who imposed the pallium during a Mass celebrated Oct. 7, the feast of Our Lady of the Rosary, at St. Peter Chanel Church in the Atlanta suburb of Roswell.

The pallium -- a band of wool worn over an archbishop's shoulders to signify unity with the pope and responsibility to care for his flock -- was blessed by Pope Francis on the feast of Sts. Peter and Paul, June 29, in Rome.

Due to COVID-19 travel restrictions, Archbishop Hartmayer was unable to travel to Rome for the papal blessing.

While Pope Francis continues to bless palliums and give them to archbishops as his predecessors did, the pope also decided several years ago that the formal imposition of the bands would be done in the archbishops' archdioceses by the nuncio in their country.

Nearly 50 priests and some 80 invited guests attended the midday Mass in Roswell, which was livestreamed. Bishops of the Atlanta province also attended. Attendees wore masks and adhered to social-distancing guidelines.

Challenging the world is a mission or vocation that Christians are called to, said the nuncio. He added that the church is not "another society," rather "it is a sign of God's presence where we live."

Later in his homily, the nuncio reflected on Mary, mother of the Redeemer.

"Free from sin, her heart was free to say 'yes' to God," he explained.

Addressing Archbishop Hartmayer, he said: "Your heart must continue to be free to say 'yes' to God as a shepherd configured to Mary's son."

Archbishop Hartmayer grew up outside of Buffalo, New York. He was ordained in 1979 as a Franciscan priest in Albany, New York, serving in different education ministries. He moved to Atlanta in 1995 when he was appointed to lead St. Philip Benizi Church in Jonesboro and later St. John Vianney Church in Lithia Springs. He was named bishop of Savannah in 2011.

Pope Francis appointed then-Bishop Hartmayer to be Atlanta's seventh archbishop in March. He was installed in a quiet ceremony, amid the pandemic, in May at the Cathedral of Christ the King in Atlanta.

Archbishop Hartmayer thanked his family, priests, religious and brother bishops attending the pallium Mass. He expressed gratitude to Pope Francis for giving him the opportunity to serve the church in the Archdiocese of Atlanta.

"I pray I will be able to meet his expectations. I know that he is praying for me," said the archbishop.

He commented on the shape of the pallium, which is reminiscent of a sheep being carried on his shoulders and "never to be separated" from it.

"And that is exactly my mission, I believe ... to bring unity where there is disunity and to bring together a diverse community of baptized people and to see one another as brothers and sisters," said Archbishop Hartmayer. "The pallium will always remind me of this responsibility."

Golden is editor of The Georgia Bulletin, newspaper of the Archdiocese of Atlanta.