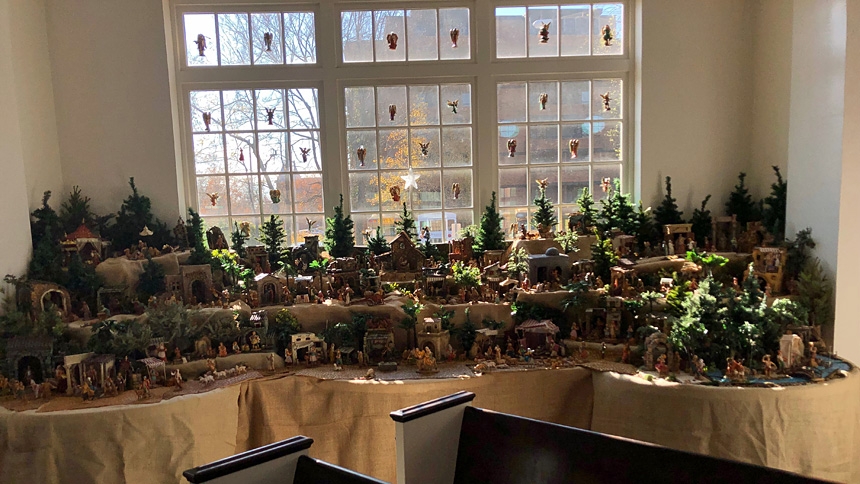 Visitors to St. Ann Church in Fayetteville will see the Christmas story unfolded in an amazing display of art based on the nativity. For the second year, St. Ann pastor Father Stephen Shott, O.S.F.S., will stage his collection of more than one thousand Fontanini figures, showing the events of Christmas from the arrival of Mary and Joseph in Bethlehem to the flight into Egypt.

St. Francis of Assisi is said to have created the first Nativity scene – presepe or presepio in Italian – in Assisi in 1223. Eventually the tradition spread throughout Italy and the other Catholic countries of Europe.

In the 17th and 18th centuries in parts of Italy, the scenes became quite elaborate, with families adding animals, architectural features and scores of characters, sometimes family members or neighbors or stock figures – farmers, wine venders, gypsies – members of all the colors and classes of society, to create tableaux of village life.

There is catechesis in this practice, Father Shott pointed out.

The Fontanini figures embraced this tradition. They were first introduced in 1908 by Emanuele Fontanini in a small Italian village called Bagni di Lucca located in Tuscany.

Not only did Fontanini produce diverse figures around the events of Christmas, but each figure had a back-story, written on a card that was included in the box with the figure.

For example, Father Shott explained, there is a figure of a boy who has been fishing. “The story is that he was the child of the innkeeper, and when he asked to go fishing his parents

told him that first he had to sweep the stable clean. So he did that, and when he returned from fishing saw that the stable was occupied by Joseph and Mary.”

These stories are a way of making the incarnation come alive for the faithful, especially children, Father Shott noted.

He began collecting the figures when he was a student, but most of his collection today is the result of gifts from parishioners in the churches where he has served. The display takes several workers all night to assemble and add lights.

Visitors may view the nativity scene, located in the church, until the Feast of the  Baptism of the Lord on January 13, 2019.