Catholic couple find solidarity with others in sharing NFP struggles, other challenges 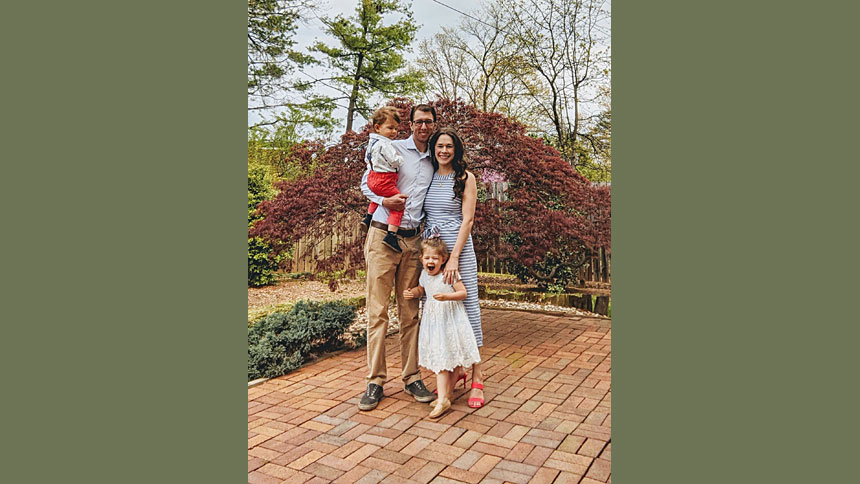 SUPERIOR, Wis. (CNS) — Actively living out their Catholic faith as individuals and a couple — following the church’s teachings on natural family planning in particular — has sometimes been challenging for Nick and Emily Frase.

But for Nick, who grew up in the Diocese of Superior, the lesson that being a faithful Catholic wouldn’t always come easy was built into his formation. Strength in their faith and the support of a solid Christian community has guided the couple through trying times.

“Having that community of a bunch of people just trying to do marriage and parenthood to the best of their ability has made all the difference with us remaining faithful to the church and each other,” Emily told the Superior Catholic Herald, the diocesan newspaper, in a phone interview from Virginia, where the couple now live.

“We’ve met a lot of faithful couples who are in agreement that the era of comfortable Christianity is over,” Nick agreed. “We cannot rely on the broader culture to inculcate our children with a baseline Judeo-Christian ethic, the sort of thing taken for granted by previous generations.”

Born in Milwaukee, Nick spent most of his childhood in Hudson, Wisconsin. He and his parents, Mike and Cyndee Frase, were parishioners at St. Patrick Parish, where his parents remain active members.

In those years, the parish had more than its share of tragedies, most of them stemming from the placement of a priest who sexually assaulted teens, likely committed two murders in 2002 to cover up his crimes, and then killed himself in 2004.

“Anyone with knowledge of the diocese knows we had some tough times at St. Patrick’s,” Nick said. “That’s probably not the most revolutionary thing spoken, but it has impressed on me the importance of witnessing to our faith even when inconvenient.”

He credits one of his good friends with inspiring him to “own” his faith in high school: now-Father David Neuschwander, a Superior diocesan priest who serves in Hayward and Cable, Wisconsin.

Nick headed off to Washington after his 2010 graduation from the Franciscan University of Steubenville, Ohio, where he earned a bachelor’s degree in history with a minor in theology.

In the nation’s capital, Nick landed in the nonprofit world, where he encountered “men and women of all Christian stripes working together to advance justice, religious liberty and the pro-life cause,” he said. “It’s a true sacrifice for many and an experience I wish every young professional could have, seeing true salt-of-the-earth people at work.”

While working for the Family Research Council, a pro-marriage, pro-life organization in Washington, Nick met Emily, who started out as a paid intern and stayed on for five years.

The couple married in 2016, and Nick later moved on to a profession more financially supportive of family life and now works in e-Discovery/litigation support. They settled in Northern Virginia.

A native of Louisiana, Emily also had a solid Catholic upbringing. She and her brother were home-schooled, mostly through a co-op with other families, until eighth grade. Her parents moved to Texas when she was a teen.

“One of my fondest memories was being taught my catechism by the Missionaries of Charity,” she recalled. “They had a mission at the parish we attended in Baton Rouge. I still remember being prepared for my first Communion by Sister Tessalina, a sweet nun from India, who taught us many of Mother Teresa’s simple prayers, some of which I still say to this day.”

Emily graduated with a bachelor’s degree in architectural studies from Louisiana Tech University in 2012. After taking a break from Catholicism in her second year of college — school was too demanding for her to go to church, she told God — she lost her friends, her faith and her “sense of balance.”

“It was Sheen’s concept of the ‘noble woman’ that particularly captivated me, sealed my return to the faith and completely changed the course of my life,” Emily said. “Our son’s middle name is Fulton in his honor.”

Emily quit her job with the Family Research Council to stay at home soon after the couple’s first child, Evelyn Grace, was born in March 2017. A second child, Thomas Fulton, arrived in June 2018.

When they married, NFP was the obvious family-planning choice for two devout Catholics. They started out with the sympto-thermal method, which they learned from the Couple to Couple League.

Unfortunately, it didn’t work for them. Emily was pregnant three months in.

“We actually had two unexpected pregnancies,” said Emily. “That experience definitely made us question the sanity of church teaching on NFP and birth control, because clearly, the church’s way wasn’t an effective way to ‘plan’ our family.”

Their daughter was 8 months old when Emily found out she was one month pregnant with their son.

Her faith was tested by the early pregnancy, Emily said. She felt “totally abandoned by God,” and questioned everything, “including the goodness of God.”

“We had been faithful to church teaching, we had valid reasons to avoid a pregnancy, and yet it felt like God didn’t care,” she added. “I was very angry, and eventually just stopped praying, though I kept attending Mass and going to confession.”

Then they realized they should have had “realistic expectations about NFP” from the beginning of their marriage, she commented.

After their son’s birth, the couple switched to the Marquette method, a fertility awareness system that worked for them. But Emily didn’t just gloss over their tumultuous relationship with NFP. She used her story, along with her professional experience in writing and editing, to develop a blog she had started in 2018 into a space of dialogue for Catholics.

Besides NFP, self-care, wellness, faith and the role of the stay-at-home mom also are part of the discussion.

“The response has been overwhelming,” she said. “I am now in the process of forming an organization to address these issues I’ve encountered from countless women and couples on a larger scale.”

Nick admires his wife’s work. He sees NFP as both countercultural and a powerful form of Christian witness.

“NFP has been such a lodestar and, I hesitate to say ‘litmus test,’ because it is one of these outwardly visible witnesses that is massively inconvenient in the world’s eyes,” he commented, adding: “We have met so many people of honest faith (often Protestant) who are attracted to this idea of authentic surrender to God’s will and open up their souls to us in deep ways.”

“My purpose for the blog was to share my life of faith in an authentic way, not hiding the parts that are hard, but using my own vulnerability to cultivate solidarity with others who find faithfulness difficult at times for any number of reasons,” Emily said.

Added Nick, “We need to witness the truth of our faith, and live it honestly.”

Draper is editor of the Superior Catholic Herald, newspaper of the Diocese of Superior.