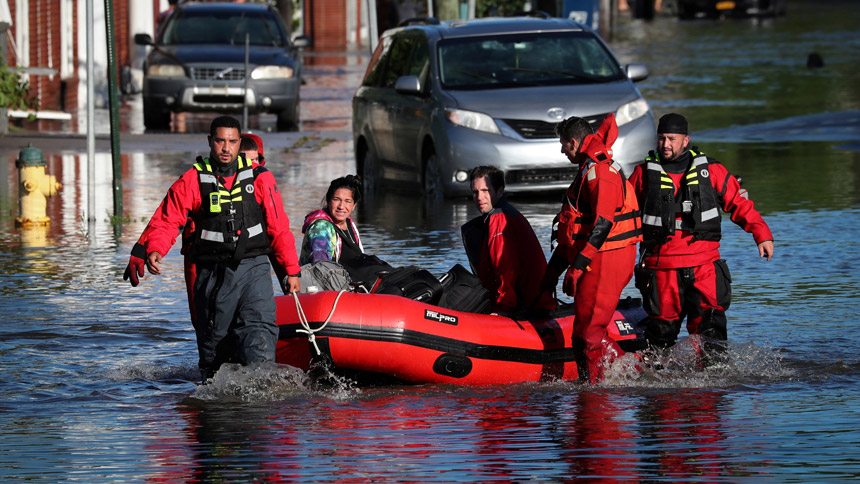 Above: First responders in Mamaroneck, N.Y., pull local residents in a boat Sept. 2, 2021, as they rescue people trapped by floodwaters after the remnants of Tropical Storm Ida. (CNS photo/Mike Segar, Reuters)

With several Northeast states now joining major metropolitan regions in the Gulf Coast as Hurricane Ida-related disaster areas, Catholic Charities agencies are using virtual deployment systems refined during the coronavirus pandemic to maximize their outreach to those in need.

Prolonged power outages or record flooding are making quick disaster response access to the greater New Orleans and New York City areas an impossibility following the remnants of Hurricane Ida as it marched north after making landfall Aug. 29 in Louisiana.

“COVID set the stage for being able to do virtual deployment: instead of a physical person on the ground, staff can assist by doing phone calls, setting up shared documents on the internet, and taking an administrative burden off the local staff,” said Kathleen Oldaker, senior director of disaster strategy for Catholic Charities USA.

As it did during Hurricane Katrina, Catholic Charities in the Diocese of Baton Rouge, Louisiana, is expected to serve as the central supporting role in recovery efforts in hard-hit New Orleans and Houma-Thibodaux.

“But we are also looking at possible virtual actions: a (staff) person in California or Indiana — if there is a way of doing things with our network that might require some bandwidth — can help the agencies on the ground can focus on their outreach,” Oldaker told Catholic News Service Sept. 2.

Hurricane Ida’s remnants delivered a deadly surprise punch in the Northeast, causing an estimated 41 deaths and flooding roads and cities after slogging across New York, New Jersey, Pennsylvania, Maryland and Connecticut. The post-tropical cyclone reportedly dropped more than three inches of rain in an hour in New York.

Catholic Charities staff have learned that text messages can be a more reliable form of communications wherever cellphone signals are knocked out, which includes a large area of Southeastern Louisiana.

Each year, staff members at Catholic Charities complete a training program called the “Applied Institute for Disaster Excellence,” a decade-old preparedness platform that can prepare a staff person with disaster experience in Maine, for example, to deploy to Louisiana.

But Hurricane Ida left infrastructures so badly damaged in places like Louisiana that teams will have to wait for electricity and water to come back online.

“What we are really seeing in this response is the neighboring agencies offering support from Lake Charles, Lafayette, Baton Rouge, and Biloxi, Mississippi — they have had staff go and help Houma with assessments and seeing where they could do distribution sites,” Oldaker said.

In the South, Houma may have experienced some of the greatest wind damage following Ida, whereas New Orleans is mostly suffering from a damaged power infrastructure. Catholic Charities staff in New Orleans have been focused on checking in on residents living in senior care homes and other residential facilities there.

“The Catholic Charities agency in Houma is trying to get on their feet a bit in a place where you walk outside and the house next door is either destroyed or damaged,” Oldaker said. “We have a Houma-Charities staff member who lost a home down to the concrete slab there.”

In the Northeast, Catholic Charities workers spent Sept. 2 contacting agencies in the Mid-Atlantic states and New York and New Jersey especially, which took some of the heaviest flash flooding.

“Right now, the agencies are not in assessment mode; we have heard of a flooded agency in one of our buildings in New York City; in the next day or two we will get a handle on the level of response,” Oldaker said.

Calls also went out to agency chapters in Pennsylvania, and parts of Maryland, Virginia and the District of Columbia.

Across the system, Catholic Charities agencies have been inundated with calls from Ida evacuees who mostly fled the Gulf Coast region to areas across the country.

“We even had a call from Paterson, New Jersey. They reported a few evacuees there and they were wondering what they could do to help,” Oldaker said of the Catholic Charities affiliate there.

“In Houston, Texas, alone, we got some 10,000 phone calls or requests from evacuees, with people lining up outside their doors even before they opened.

“People are sleeping in the car, finding hotels are not available, or the hotel bills are getting expensive for those who cannot go home for a few weeks. Those costs get pretty expensive pretty fast,” she added.

When asked what may be different about the emergency response in 2021 over past years, Oldaker said the ongoing COVID-19 pandemic adds an additional burden to the crisis response and distribution work.

“Ten years ago, I would not have been ordering masks and gloves and personal protective gear — it wasn’t something we thought about, and in Louisiana it is something they are thinking about in terms of spacing evacuees and people having to wear masks in such high heat.”

“How do you balance response with safety, that is a new normal as we move forward with disaster work,” Oldaker said.

September, she said, is national disaster preparedness month and getting people prepared is a good thing “because you never know when what might look like just rain could be a big event. When a river washes out it is shocking how fast you can have water coming into your home.”

Patricia Cole, vice president of communications Catholic Charities USA, noted that contributions are critical right now and that 100% of the donation proceeds will be directed to the disaster areas following Ida.