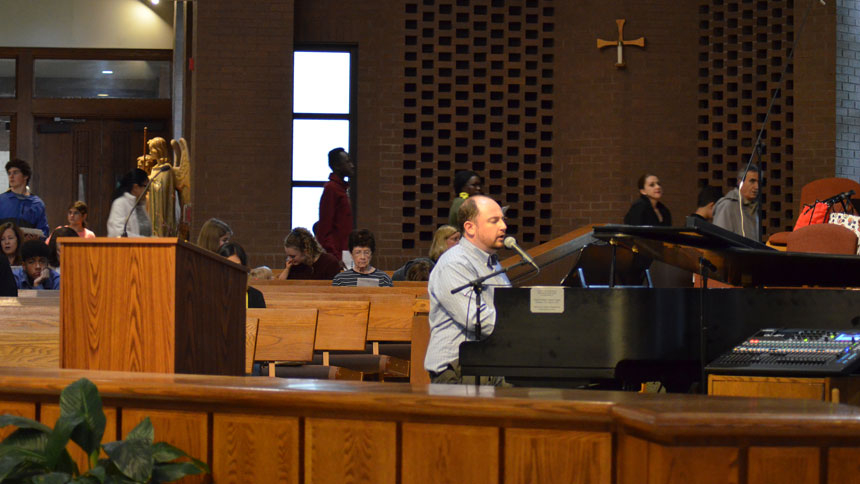 I had the opportunity to speak with our bishop, Luis Rafael Zarama, on the subject of music. In this three-part series, I share our conversation and conclude with a few of my own reflections. - JR

JR: What was your experience of music around your house or neighborhood growing up in Colombia?

Bishop Zarama: We listened to radio shows on a wave radio because we didn't have a good radio station in my hometown, and my mother liked to listen to classical music most of the day. And I think that was mostly the music that I heard in my home. In my hometown, the music that I grew up with was for dancing, like cumbias and merengues, that were part of fiestas in my hometown in Colombia. I knew that my grandmother played the piano, but I never knew her. In my grandfather's house, we had the piano, but nobody played the piano. We would touch the keys as kids, but I never took classes.

JR: What was music like at (your) church going to Mass growing up?

Bishop Zarama: When I was growing up, when I went to Mass there was not really music. It was just spoken. Once in a while, I heard a guy play the harmonium (a small version of an organ) in the summertime in another town that we visited. And there would be one person playing the harmonium and singing a song. But in my hometown, I don't remember hearing choirs for Mass.

JR: Would people sing at other times, like in a procession, outside of Mass?

Bishop Zarama: When they had the processions, especially for Holy Week, they didn't sing, what they did was pray the rosary. And I remember every year that the state band was playing at the end of the procession, like funeral music.

JR: Do you think that it was typical in Colombia not to have music as much in church, and has that changed since you were a child?

Bishop Zarama: (On) the couple of occasions I have been back to Colombia, I have seen that they are singing more during Mass. It has changed. And not just on Sunday, because sometimes when I visit, I just go to Mass and sit in the pew because it is a different experience than being the presider. But I can say at even daily Mass, they usually have someone playing the guitar and singing songs, and that makes a big difference.

JR: Growing up did you learn to play an instrument or sing in a choir?

Bishop Zarama: No. I thought about playing piano. I didn't because the piano was at my grandfather's house, not at my house. And we didn't have any music in school.