Bishop Howze, originally ordained for Raleigh and first black bishop in the 20th century to head a U.S. diocese, dies at 95 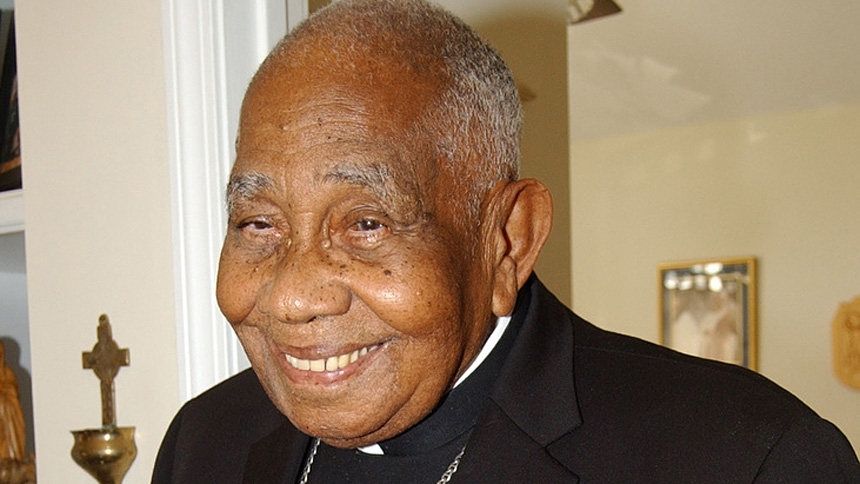 Bishop Joseph Lawson Howze, the founding bishop of the Diocese of Biloxi and the first black bishop in the 20th century to head a U.S. diocese, died Jan. 9.

"While we are saddened by the death of Bishop Joseph Lawson Howze, we rejoice in his life," said Bishop Louis F. Kihneman III of Biloxi. "His was a life well lived in faithful service to almighty God and to the people of Mississippi, both as an auxiliary bishop of the Diocese of Natchez-Jackson and later as first bishop of Biloxi from 1977 to 2001."

Noting that establishing a new diocese was difficult work, Bishop Kihneman said Bishop Howze was "very proud of what he, with the help of devoted clergy, religious and laity, accomplished during his tenure" and was "forever grateful to the people of the diocese for their unfailing generosity of time, talent and treasure."

"He loved the Diocese of Biloxi and prayed unceasingly for its continued success. He had a genuine concern for the salvation of souls," he added.

Joseph Lawson Howze was born in Daphne, Alabama, Aug. 30, 1923, to Albert Otis Howze Sr. and Helen (Lawson) Howze. He began his school years at Most Pure Heart of Mary School in Mobile, Alabama, but his first year of school was interrupted in 1928 by the death of his mother, just six days after she bore her fourth child. The eldest, then age 5, young Lawson (Joseph is his baptismal name) was shuttled back and forth between the homes of his grandparents, aunts and father, who later remarried and fathered three more children.

After graduating as valedictorian of his 1944 high school class, a young Lawson Howze graduated with honors and as president of the senior class from Alabama State College. He had intended to study medicine, but instead earned a bachelor's degree in science and education and began teaching biology and chemistry at Central High School in Mobile.

Bishop Howze first had been a Baptist, then a Methodist, serving as a choir director and church organist and pianist.

But while teaching at Central High School he was drawn to the Catholic faith through the example of Marion Carroll Jr., one of seven Catholic students in his biology class. Soon he began instruction in the Catholic faith under the direction of Josephite Father Benjamin Horton.

At age 25 on Dec. 4, 1948, he was baptized a Catholic at Most Pure Heart of Mary Church in Mobile. An interest in the priesthood soon developed. After inquiring about becoming a priest with Bishop Vincent S. Waters of Raleigh, North Carolina, he later was adopted as a student for the diocese and began studies at the Diocesan Preparatory Seminary in Buffalo, New York.

“He was always very serious, very devout,” [now] Monsignor Lewis said. “And he was a little quiet, not shy … but quiet.”

He was ordained a priest in 1959 at Sacred Heart [then] Cathedral in Raleigh. He served as pastor of several parishes in North Carolina, including parishes in Southern Pines and Durham, during his 13 years of ministry in the state.

In November 1972, St. Paul VI appointed Father Howze as auxiliary bishop of the Diocese of Natchez-Jackson, Mississippi. His episcopal ordination followed on Jan. 28, 1973, in Jackson.

Within a year, Bishop Howze accepted the presidency of the National Black Catholic Clergy Caucus.

On March 8, 1977, Bishop Howze was appointed as the first bishop of the newly established Diocese of Biloxi.