Beads of Hope: How the faithful are praying the rosary 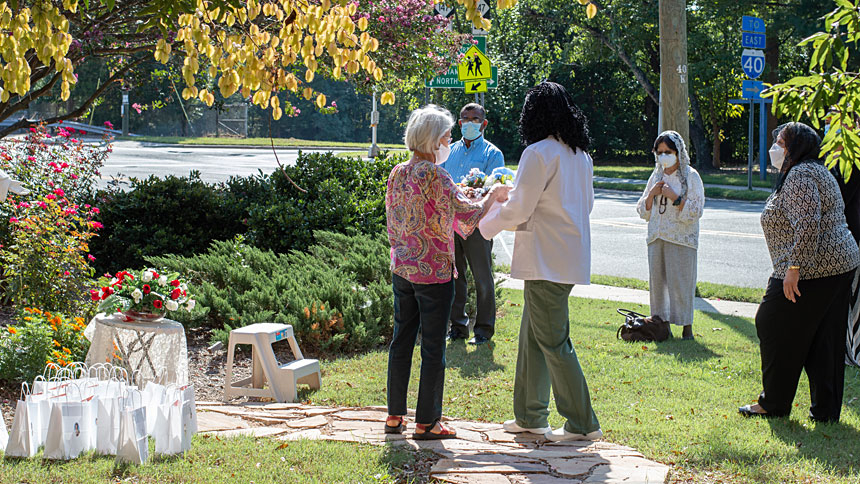 The Oct. 7, 1571, Battle of Lepanto was a naval fight between the Holy League, a Christian coalition arranged by Pope Pius V, and the Ottoman Empire. It was said to be the battle to save Christianity itself.

It was a battle the Catholic Christian fleet was expected to lose.

What the experienced and larger Ottoman army didn’t expect was that, as part of his battle plan, Pope Pius V instructed all Christians to turn to Mary and pray the rosary.

The Holy League won the day decisively, and Pope Pius added Oct. 7, then known as the feast of Our Lady of Victory, to the liturgical calendar. Over centuries, the name of the feast day changed to Our Lady of the Holy Rosary.

Now, every October, faithful are reminded that Mary promised to be there in all our battles. And that Catholics should turn to her with hope and faith, saying the rosary.

In this year filled with sickness and strife, Catholics are finding they need intercession of Mary more than ever.

Throughout the diocese, Catholics shared how the rosary plays a prominent role in their lives.

The Last of the Century

On Aug. 17, 1999, Bishop Joseph Gossman sent an official letter to Sister Elizabeth Bullen, I.H.M., to confirm her as pastoral administrator to the Catholic community in Louisburg. He also tasked her with helping the community find a name.

As the congregation voted from names suggested by parishioners, Sister Betty prayed that God’s will be done.

“We just hoped our prayers worked and that we picked the name that the Holy Spirit wanted for us,” she says.

The number one choice was Our Lady of the Rosary. And the letter of approval from Bishop Gossman was delivered precisely on Oct. 7.

Sister Betty now lives with her congregation of sisters in Scranton, Pennsylvania. As she tells the story over the phone, her joy from that experience is still apparent.

“It was the last church named in our diocese for the century, and it was named for Mary. It’s just amazing,” she says.

Today, the parish’s commitment to honor their patroness is strong. Every week, Paula Bivona leads the rosary prior to both Sunday Masses. “It really gives you chills, to see people walking in to come worship and have them joining in the prayer. The prayer gets louder and louder; I just love that,” she says.

In addition to regular parish holy hours and rosaries, they celebrate October in a special way. A statue of Mary travels from home to home so that parishioners, while they say their daily rosary, can meditate on Mary’s impact.

“When you dive deeper into Mary’s life, what she does and who she is, she always points us to Jesus,” Bivona says.

The community that prays together …

Lita Castillo, a member of St. Matthew Parish in Durham, admits that when she was a young girl in the Philippines, her mother had to pinch her to stay awake during the daily rosary. Now, Castillo is a leader of the Fatima Prayer Group, a dedicated group of over 60 people from several parishes who have been praying the rosary together every week since 1986.

The tradition began when Castillo’s mother was given an Our Lady of Fatima statue from Portugal. Wanting to share the beautiful gift, Castillo’s parents invited family and friends to come to their home and pray the rosary. From that day, the tradition evolved. Every week, the blessed mother statue travels to a new home. That home is then host to the weekly celebration which includes food, comradery and devotion.

When COVID-19 threatened to stop the group from gathering for the first time in over 30 years, Lyn Francisco, of Immaculate Conception Parish, stepped in to lead the group through Zoom.

“The rosary is a huge part of Catholic Filipino culture,” says Francisco, who moved to Durham as an adult. “To be honest, I never really felt like I was home until I made contact with the Fatima prayer group.”

She was determined to help keep the group safe while ensuring the community prayers did not stop. For the foreseeable future, the Fatima Prayer Group gathers every Saturday evening virtually. They visit, worship and ask for the healing of the world.

“We are asking Mama Mary, every night, to help those who are affected by COVID, so no more people will get it,” says Castillo.

Allie Yardley wanted to incorporate a daily rosary in her prayer practice, but the idea intimidated her. A mother of five children, ages 5 to 15, Yardley found it hard enough to ensure a weekly, family rosary.

But two things happened that changed everything.

First, while listening to Divine Mercy Radio, she heard an invitation to join the Million Rosary March. Second, she heard a homily at Mass that helped her find the confidence to commit.

The Million Rosary March is a nationwide initiative asking people to commit to praying the rosary every day for 100 days from Aug. 15, the feast of the Assumption, to Dec. 8, the feast of the Immaculate Conception.

Though Yardley is on her own when she prays the rosary each day, she knows she is not alone. “It gives you so much comfort,” she says. “We are so connected, but we’re not. You can be ‘connected’ constantly, but it’s a false and empty and, often, angry connectedness.”

Feeling called to commit, she remembered a homily Father Pat Keane (Our Lady of Lourdes) gave about praying a daily rosary. “He suggested doing a daily rosary, but doing it throughout the day,” says Yardley.

She says she will generally pray in the morning and try to get a decade or two in before life inevitably knocks on the door. Throughout the day, when she has a break, or when she intentionally needs to take one, she will pray a decade.

“This has been my approach, and it’s been awesome. I can honestly say I think it’s changed my life.”

Aron and Joseph Forthofer, 17-year-old twins from St. Ann Parish in Clayton, were troubled and looking for prayer to help heal problems they saw in the nation and the world.

Inspired by a walking rosary initiative in another diocese, they asked friends how they felt about organizing something similar.

Now, every Monday evening, these six young leaders invite others to join them in praying 15 decades of the rosary while walking around Holy Name of Jesus Cathedral. The walk is done slowly and completely on paved areas to promote inclusion for those in wheelchairs or strollers.

For Molly Crouch, who attended Aug. 31 for the first time, the walking rosary was “peaceful … a great way to start the week.”

Jean Cooper from St. Ann says that she attends every chance she gets.

“I was very happy to come … I thought about how in these unprecedented times, we need to bring out the ‘big guns,’ or, the ‘big gun;’ which is the rosary,” she says. “Even if you’ve never prayed a rosary in your life, don’t be afraid to join us. Our Lady, everywhere she appears, she asks one thing: pray the rosary! It’s such a simple request to fulfill, so I hope to see a lot of new faces out here from now on!” 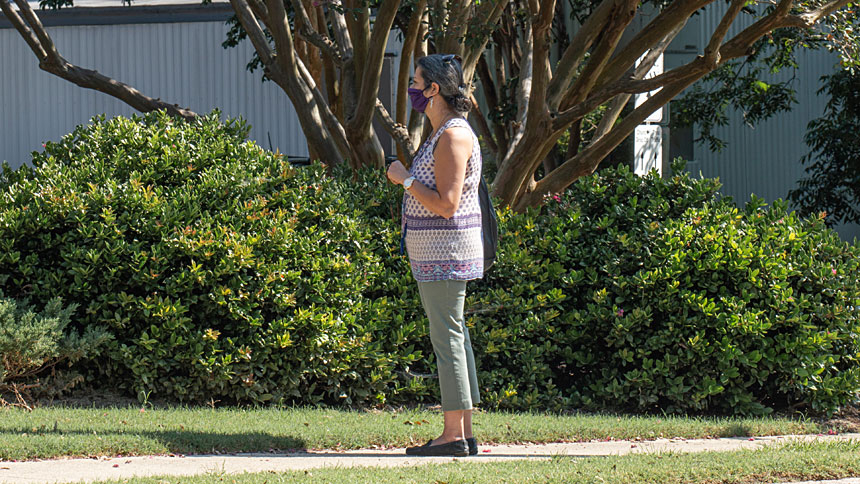