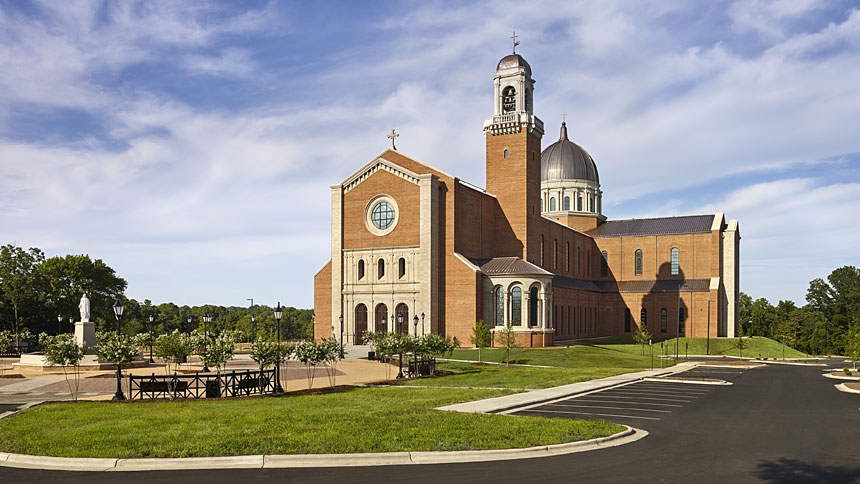 As noted by the ICAA, “the Awards are named for John Russell Pope, 1874-1937, best known as the architect of the Jefferson Memorial and the National Gallery of Art in Washington, D.C. He was renowned for interpreting European classicism in a new, American form. As noted by architect and historian Stephen M. Bedford, Pope’s domestic and monumental architecture established him as a ‘leader in the development of highly refined and restrained American classicism.’ The Awards recognize the best work of individuals who contribute to the creation of classical and traditional architecture in the Washington Mid Atlantic region.” 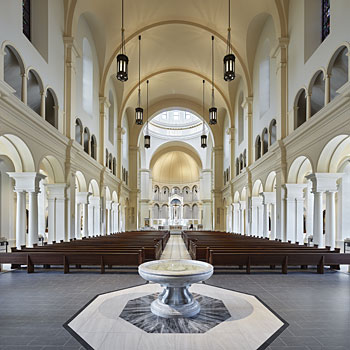 Faced with the challenge of accommodating the growing and thriving Catholic community in the smallest of all the cathedrals in the continental states, the client called for the design of a new building, to be built on the heritage of traditional sacred architecture and to convey a timeless spirit.

In response, the architect answered with a design arranged in a cruciform layout, with the main axis of the building placed in an east to west orientation. The sanctuary is located at the crossing under a round dome upon a drum, while the tabernacle is placed within the eastern apse. Seating for the congregation, illuminated from above by clerestory windows, is located within the nave and transepts and is separated from the side aisles by an arcade.

The main building entry announces the design theme and introduces classical orders: the Doric order comprises the first tier of the façade, while the Ionic order fills the second tier. Outside, a public plaza is situated to provide vehicular and pedestrian circulation as well as serve as a vibrant public gathering place, featuring decorative paving, lighting, and benches, and accented with a monumental statue.

The Holy Name of Jesus Cathedral is now the new seat of the Bishop of Raleigh. It serves as the site for major liturgical celebrations, pilgrimages, and events for the people of eastern North Carolina, thereby fulfilling its role as Domus Dei (home of God) and Domus Ecclesiae (home of God’s people).

O’Brien & Keane is a full-service architecture firm located in Arlington, Virginia, offering more than 25 years of expertise in building design, interior design, and land planning services to a broad spectrum of clients. The firm specializes in school and traditional Catholic church design, and provides full architectural and engineering services for major new facilities as well as church renovations, building additions, and adaptive reuse projects. They also provide consulting, engineering, and specialty design services through subcontracts with allied design professionals, including the design and fabrication of marble liturgical furnishings.

For further information or photographs of the project, please contact James Henry O’Brien, AIA, via telephone or text message (703.801.7013) or email (jobrien@obrienandkeane.com).