All saints, all souls, all names: Historian works to remember the dead by name 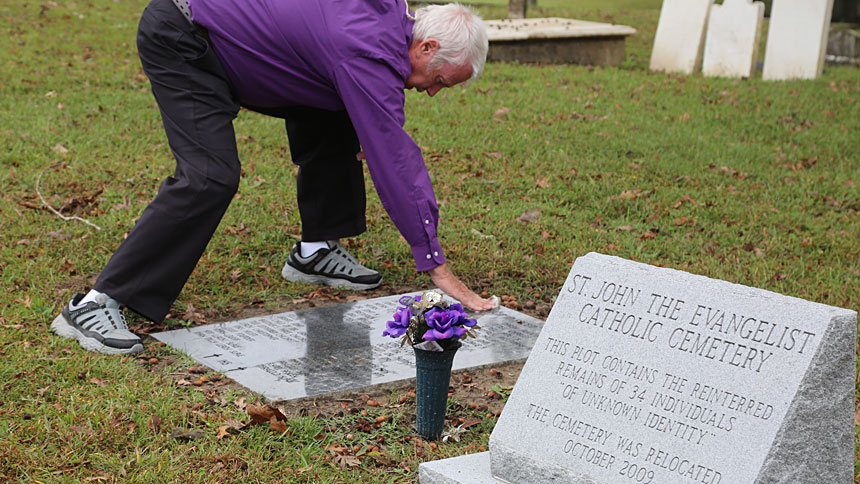 Above: Mother of Mercy parishioner Larry McDaniel oversees the creation and placement of a grave marker in Washington, NC.

While on a walk in Oakdale Cemetery in Washington, Mother of Mercy parishioner Larry McDaniel spotted a grave marker that, he says, “rubbed him the wrong way.”

The marker read, in large letters at the top, St. John the Evangelist Catholic Cemetery. A lover of history, and currently researching and writing a book on the roots of Carolina Catholicism, McDaniel immediately recognized the name.

St. John the Evangelist is one of the founding Catholic communities of North Carolina. Established as a faith community in 1821, the church was officially consecrated in 1829.

That church building was burned to the ground at the end of the Civil War. Over a century later, remains from its cemetery were reinterred in Oakdale.

It wasn’t the history that bothered McDaniel, though, it was the anonymity. There was a headstone informing visitors of the original burial site and the date of re-interment, but there was not a single name of those within the plot.

“These remains were moved in 2009, a headstone…said, ‘of unknown identity,’ and that rubbed me the wrong way. I decided we needed to know who they were,” McDaniel said.

A note on the back of the headstone informed people they must go through the government clerk in order to find the names.

That wasn’t good enough for McDaniel.

He immediately talked to Father Brendan Buckler, Mother of Mercy pastor at the time, about raising funds for a plaque to list the names of those who were laid to rest there. With the full support of the parish, and after receiving generous donations to fund a beautiful granite stone, McDaniel went to work.

He found the names of all those buried in the original cemetery and diligently checked drafts of the headstone. He pored over the details of spacing and spelling, ensuring everything was done correctly. “I wanted their names to be known,” said McDaniel.

For nearly a year, McDaniel dedicated himself to ensure that the names of founding Catholics in North Carolina would be honored and remembered.

Father Mike says that though he wasn’t there at the start of this project, he was honored to be there for the blessing, especially in light of All Saints Day and All Souls Day.

“It’s important to pray for our deceased relatives and friends.… Many of these people [named on the grave marker], their families have either moved on or passed away themselves. We wanted to pray for them, to bless this area and give them a proper service,” he said.

The original grave marker from 2009 stated that 34 remains were moved. The newly dedicated marker lists over 50 names, all of the inhabitants from the original cemetery. Each name represents someone who helped found and establish the Church in North Carolina, at a time when being Catholic was neither celebrated nor, sometimes, even tolerated.

Now, thanks to the work of a dedicated and passionate historian, those Catholics who may have set a foundation for others will be remembered, honored and prayed for, by name. 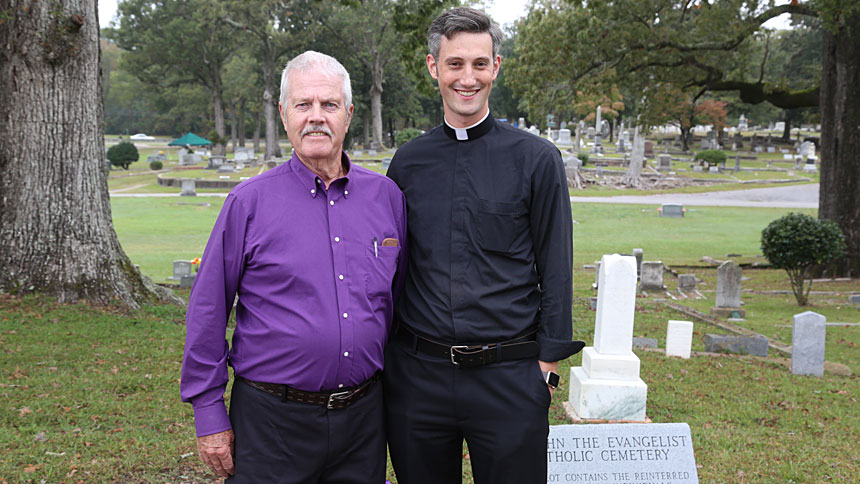