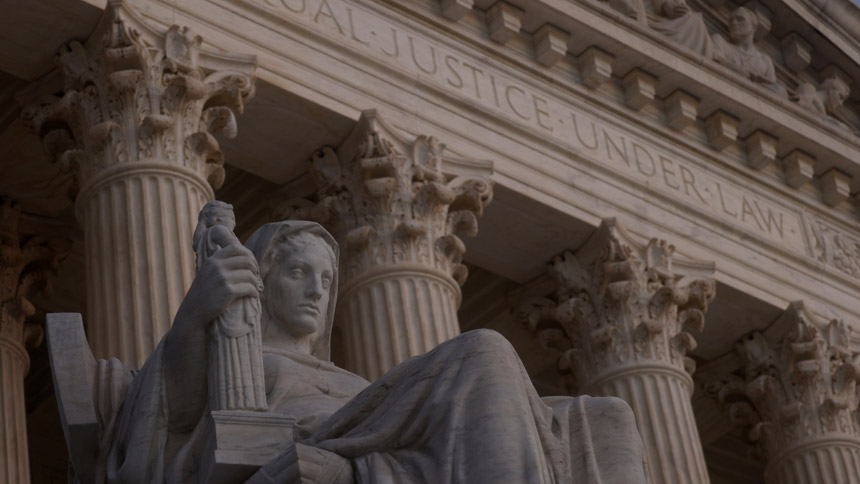 Above: The Supreme Court building is seen in Washington Nov. 29, 2021. On Dec. 1 the court was scheduled to hear oral arguments in when the court hears oral arguments in Dobbs v. Jackson Women's Health Organization, which is an appeal by Mississippi to remove a lower court's injunction on its law banning most abortions after the 15th week of pregnancy. (CNS photo/Leah Millis, Reuters)

WASHINGTON (CNS) — When the Supreme Court hears oral arguments Dec. 1 for the biggest abortion case in decades, all eyes — and ears — will be on the court.

Diocesan websites across the country have posted links to the arguments as well as churches where prayers will be taking place at this time. Several dioceses also encouraged Catholics to take part in an online national prayer event in mid-November to pray for the outcome of this decision.

Reaction on social media, multiple briefs in support and opposition to the case and the likely presence of protesters and supporters on the court’s steps Dec. 1 are just a small indication of how divided the nation is on abortion and on the court’s potential to significantly restrict it or perhaps even overturn Roe v. Wade.

The case before the nation’s high court, Dobbs v. Jackson Women’s Health Organization, is an appeal from Mississippi to keep its ban on abortions after 15 weeks of pregnancy. This ban was struck down by a federal District Court in Mississippi in 2018 and upheld a year later by the New Orleans-based U.S. Court of Appeals for the 5th Circuit.

The Mississippi law is being challenged by the state’s only abortion facility, the Jackson Women’s Health Organization.

When the court announced this spring that it would take this case, after considering it more than a dozen times since 2020, the justices said they would only review one of the three questions presented to them: “Whether all previability prohibitions on elective abortions are unconstitutional.”

That point of viability — when a fetus is said to be able to survive on its own — is key because the Supreme Court has consistently ruled that states cannot restrict abortion before 24 weeks, or when a fetus could survive on its own. Mississippi’s ban on abortions after 15 weeks is more restrictive than current law.

If the court sides with Mississippi, it would be the first time the court would allow an abortion ban before the point of viability and could lay the groundwork for other abortion restrictions that other states could follow.

When the court agreed to take this case, Kat Talalas, assistant director for pro-life communications at the U.S Conference of Catholic Bishops, said the justices could potentially establish criteria other than viability, such as fetal pain, for restricting abortions.

A friend-of-the-court brief submitted by Mississippi’s Catholic dioceses of Jackson and Biloxi focused on fetal pain and said the court should “find that the state’s interest in protecting unborn children who have the capacity to feel pain is sufficiently compelling to support a limited prohibition on abortion.”

The brief also urged that a “sense of morality, and indeed, logic, must prevail in the courts on this issue. How is it that Mississippi law recognizes that an unborn baby can be a victim of a crime, and can have property rights, and yet the label of personhood at 15-weeks gestation is denied them?”

The USCCB, in its brief, stressed that abortion is not a right created by the Constitution and called it “inherently different from other types of personal decisions to which this court has accorded constitutional protection.”

Referring to the court’s major abortion decisions, the brief warned that if the Supreme Court “continues to treat abortion as a constitutional issue,” it will face more questions in the future about “what sorts of abortion regulations are permissible.”

The court’s two big decisions on abortion were Roe v. Wade, the 1973 court case which legalized abortion, and Casey v. Planned Parenthood in 1992, which affirmed Roe and also stressed that a state regulation on abortion could not impose an “undue burden” on a woman “seeking an abortion before the fetus attains viability.”

In a Nov. 28 op-ed in The Washington Post, Lynn Fitch, Mississippi’s attorney general, who is defending the state’s abortion law, said the case before the court was about “overturning Roe v. Wade and returning decision-making about abortion policy to the people.”

She acknowledged the contentiousness of the case saying: “There is no question that the issues involved in abortion policy are tough, complex and emotionally charged. But it is precisely because of such challenges that the Constitution gives the people the difficult task of balancing competing interests, devising compromises and developing policy.

“It is the core principle of democratic self-governance that U.S. citizens act on hard issues through the men and women they elect and can hold accountable at the ballot box.”

When the Supreme Court decided Roe, she said, “it took abortion policymaking out of the hands of the people. It set it apart from all sorts of other difficult policy issues and created a special set of rules that have acted to keep abortion policy behind the bench, where unelected judges decide the fate of the people’s laws.”

O. Carter Snead, law professor at the University of Notre Dame, similarly noted in a Nov. 29 statement the strong feelings in this Mississippi case and said that “despite the intense emotions” surrounding it, the fundamental issue for the court is: Does it have the constitutional authority to create a rule regarding viability? He said it does not.

As he put it: “The court’s abortion jurisprudence has for decades imposed on the nation, without constitutional justification, an extreme, incoherent and deeply unjust regime pursuant to specious reasoning and constantly changing rules, standards and rationales.”

Snead also filed an amicus brief in favor of the Mississippi law, as did other Catholics and Catholic organizations.

But while several Catholic leaders have spoken in favor of dismantling Roe v. Wade, Catholics across the board have not. Last year, a survey by the Pew Research Center showed 68% of U.S. Catholics said Roe should not be overturned and 56% said abortion should be legal in all or most cases.

During the oral arguments of this case many people will be protesting while others will be praying and some listening in.

But when the arguments — which are likely to go beyond the allotted 70-minutes — are over, those on both sides will be united in one thing: waiting for the court to announce a decision, which will likely be in early July 2022.