After the Vatican's summit on abuse, the stakes are clear 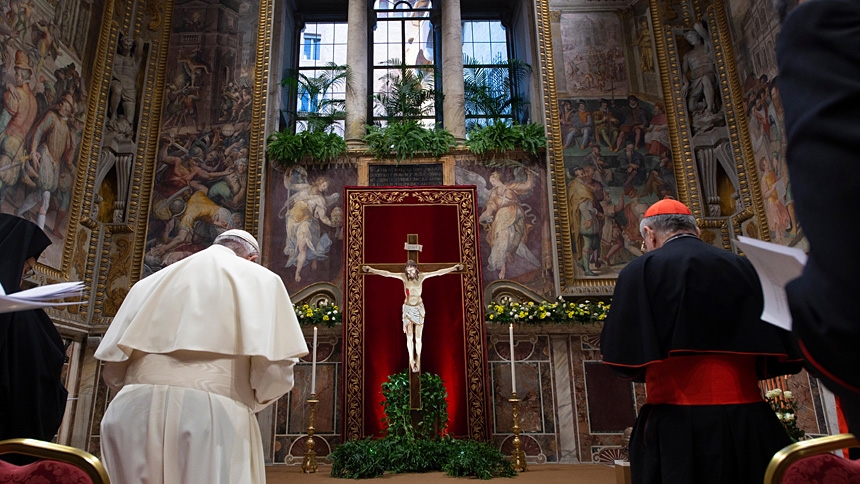 Above: Pope Francis and church leaders from around the world attend a penitential liturgy during a meeting on the protection of minors in the church at the Vatican Feb. 23, 2019. The summit brought together the pope and 190 church leaders -- presidents of bishops' conferences, the heads of the Eastern Catholic churches, superiors of men's and women's religious orders and Roman Curia officials. (CNS photo/Vatican Media)

VATICAN CITY (CNS) -- The long-awaited "Meeting on the Protection of Minors in the Church," nicknamed the abuse summit, was an extraordinary and historic gathering that surpassed many expectations while perhaps disappointing others.

Historic in that it brought together the heads of 114 bishops' conferences from the entire world, as well as the leaders of religious congregations, curial officials and even a few laypeople to discuss in a semi-public forum the sins of the church and to hear the powerful words of the victims themselves. Extraordinary in that it featured a drumbeat of eloquent and at times blunt criticisms by speakers regarding the way that the church has handled abuse crises to date.

It also may have become a prototype of sorts for what synodal gatherings may come to look like in the future in terms of both a diversity of voices and an honesty of opinion.

From the start, Pope Francis had four chief audiences to reach, each with its own suspicions and concerns.

The first was the broad leadership of the church, the bishops of the world represented by the heads of their episcopal conferences as well as the leadership of religious congregations.

The second consisted of the victims of clerical sexual abuse who so often had been ignored, excused or even attacked for having the courage to tell what was done to them. Numerous organizations of survivors came to Rome to be heard, and many made their dissatisfaction with the proceedings known, judging them too little and too unsubstantial. Within the hall, however, other victims were heard in person and by audio. Their statements were read as reflections for prayer, and every session was reminded of what they are suffering.

The third audience was both the larger Catholic community as well as the general public, both of whom increasingly look on the church as guilty until proven innocent and doubt that the church is able to police itself.

The fourth audience was those members of the Roman Curia who have been cautious about some proposals and changes, for example those proposed by the U.S. bishops last year.

It appears that the actual proceedings over the course of four days had a powerful impact on the vast majority of the attendees. From prayerful meditations on the words of victim survivors to presentations by victims themselves, the bishops came face to face with the impact of clergy sexual abuse. While some of the attendees had previous experience meeting with those who had been abused, for others coming from regions where the crisis has not been directly acknowledged, it was revelatory. The cry of the victims was made flesh before their eyes, the tears and the trauma unavoidable and undeniable.

The assembled leaders heard from their own. Cardinal Luis Antonio Tagle of Manila, Philippines, launched the summit with a spiritual reflection on the necessity of touching the wounds of their people as Thomas touched the side of Christ.

Colombian Cardinal Ruben Salazar Gomez of Bogota dismissed those who say the problem is worse elsewhere. "The fact that abuses occur in other institutions and groups can never justify the occurrence of abuses in the church," he said. He exhorted his fellow bishops, "We have to recognize that the enemy is within."

Other bishops addressed the needs for practical changes in administration, in church law, and in how the bishops related to each other, both personally and in terms of their dioceses and conferences.

Two of the most powerful speeches of the four-day summit were delivered by women. Nigerian Sister Veronica Openibo, leader of the Society of the Holy Child Jesus, shattered the myth that abuse was only a Western problem, recounting her experiences as a leader and as a woman religious regarding abuses in her own country.

Mexican journalist Valentina Alazraki, speaking as a journalist and as a mother, gave a scorching challenge to the assembled leaders: "If you do not decide in a radical way to be on the side of the children, mothers, families, civil society, you are right to be afraid of us, because we journalists, who seek the common good, will be your worst enemies."

Pope Francis, who sat through all the sessions and heard all the presentations, told the bishops at the start of the meeting that he wanted "concrete and effective measures." In the final news conference of the meeting, Jesuit Father Federico Lombardi identified three "concrete initiatives":

Legislation from the pope that would "strengthen prevention and the fight against abuse on the part of the Roman Curia and the Vatican City State."

A guide from the Congregation for the Doctrine of the Faith that would make clear the "duties and tasks" of all bishops when confronting allegations of abuse.

The creation of task forces of "competent persons" who could "help episcopal conferences and dioceses that find it difficult to confront the problems and produce initiatives for the protection of minors."

While none of these are new proposals, the impact of the summit, the explicit commitment of the pope, and the clear expectations of the larger world for a change in the status quo will put enormous pressure on the Vatican to deliver on these commitments while they in turn press all dioceses to do the same.

There are those in the Vatican bureaucracy, the fourth audience, who seem not to understand how devastating the scandals have been to the Catholic communities in North America, Australia, Ireland and Chile. The truth is that the proposed "concrete initiatives" have long been in the works, and it can appear that all in the Curia do not fully appreciate the scale and the scope of the emergency.

As Cardinal Oswald Gracias told impatient journalists at the final news conference, "It is not like the Holy Father snaps his fingers and everything is done all over the world." For this reason, the summit was an opportunity also to bring pressure to bear on those in the bureaucracy who may, for a variety of reasons, be dragging their heels.

The pope's final speech at the summit's end disappointed some. He emphasized that that the abuse of minors was a "universal problem, tragically present almost everywhere and affecting everyone," a rationale often heard from some churchmen angry or defensive about the criticism the church has endured.

But the pope made clear that the church is not just any institution: "The brutality of this worldwide phenomenon becomes all the more grave and scandalous in the church, for it is utterly incompatible with her moral authority and ethical credibility."

With this summit, Pope Francis has tossed down the gauntlet. The stakes are clear. In the words of Australian Archbishop Mark Coleridge of Brisbane, "All of this will take time, but we do not have forever and we dare not fail."