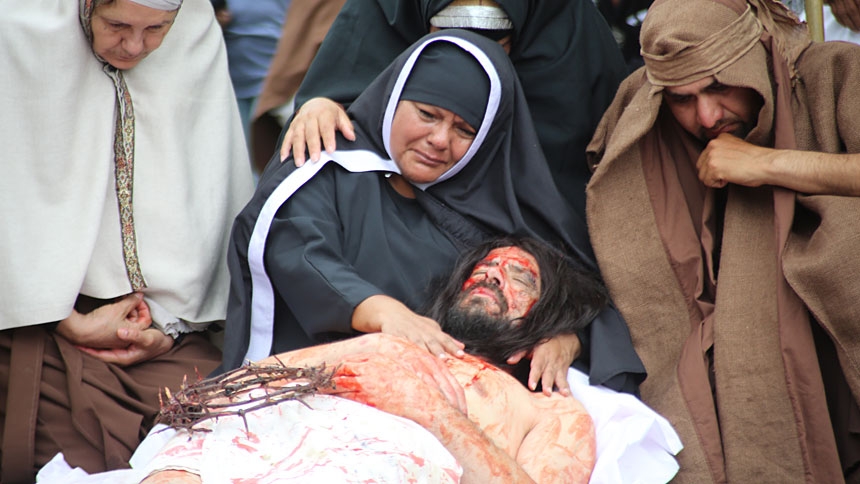 It’s Holy Thursday at Raleigh’s St. Raphael Church. Parishioners celebrate the Last Supper and the institution of the Eucharist as the true body and blood of Jesus Christ.

Of all the parishioners, one is experiencing the night in a very different way. His name is Jaime Salazar. For him, this night is especially meaningful as it’s the night before he will personify Jesus at the bilingual Via Crucis (Way of the Cross).

“[This role] helps me deepen in his passion and imagine his way to Calvary,” Salazar, who leads the Eucharistic Hispanic Ministers at St. Raphael, says.

Salazar was born in Colombia, where he met a young woman named Ana. They immigrated more than three decades ago to live in New York. After marrying, the Salazars made Raleigh their home in 2000 and made St. Raphael their home parish. In addition to their growing family of three daughters, they brought to St. Raphael the tradition of the Via Crucis.

"I have always thought that a picture is worth a thousand words. This image of a Via Crucis live reaches peoples’ hearts more,” Salazar says.

The Stations of the Cross retrace the footsteps of Jesus before his death.

“It is a way for the faithful to open their hearts and minds to God,” Salazar’s wife, Ana, who also participates in the stations, says.

Salazar uses the weeks before the live stations to prepare himself to feel some of the pain that Jesus felt on the way to the cross.

Professionally, he works an early shift at RDU airport, which gives him time in the afternoon to focus on his spiritual work.

According to Salazar, portraying Jesus is more than just a role or a play.

“It is not so much the representation but the power to live it,” he says.

The Salazars spend months preparing for their Good Friday roles.

The days of Holy Week are especially important days in which they prepare themselves with prayer, penance and fasting. They encourage the entire ministry to fast and pray together, to live the Via Crucis, so that none of the participants are merely acting.

“We try to live the moment,” Salazar says.

His family members also participate in the Via Crucis. Son-in-law, Victor Rodriguez, and grandson, James, portray Roman soldiers. His daughter, Adriana, and granddaughter, Alexandra, read the bilingual Stations of the Cross, while Ana portrays a woman of Jerusalem.

“Seeing the faith of everybody helps to grow my faith; it was the reason that makes me come back. My brother in Christ, Jaime, is a great example for us, and I am happy that he invited me to participate again this year,” says Oscar Bonilla, who portrays one of the Roman soldiers.

Salazar gets into a small room with his wife and daughters to help him to put red makeup on his body, representing the blood of Jesus’ wounds.  Before the group walks out to start the Via Crucis, everyone waits quietly. Some of the women pray in small groups. Before the last call, the entire group prays together.

One the most emotional moments during the walk is when Deacon Hector Velazco, director of the Hispanic Ministry at St. Raphael, invites the women to pray with Jesus, as portrayed by Salazar. He then he asks the men to pray for the forgiveness of their sins in the cross.

“Seeing men crying in the cross is when we know that the cross has an effect,” Salazar says.

As the Via Crucis ends at the columbarium of St. Raphael Church, Salazar rejoices as the great man that he represents is resurrected. After his portrayal, walking and suffering during the stations, there is new life under God’s love.

“We cannot stay with Jesus on the cross. Jesus must be reborn not only in our Catholic faith but also in our hearts. We know that Jesus is not in the tomb. We must proclaim the good news that Jesus has been resurrected,” he says about the experience. 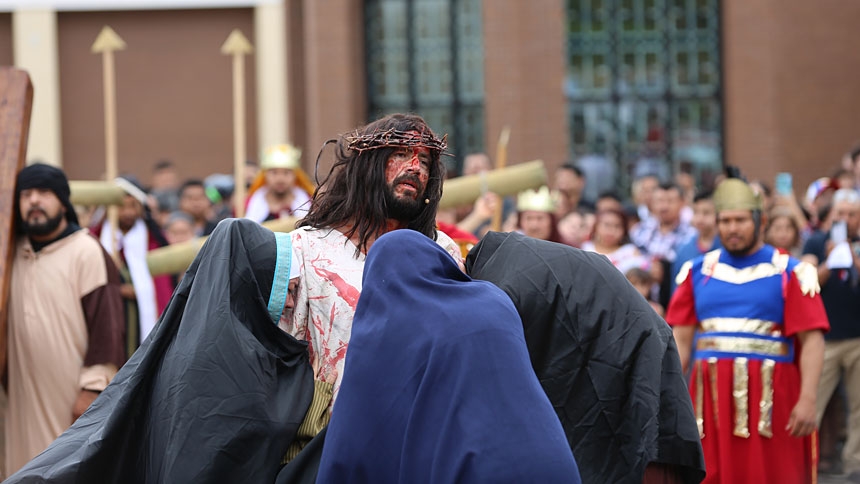 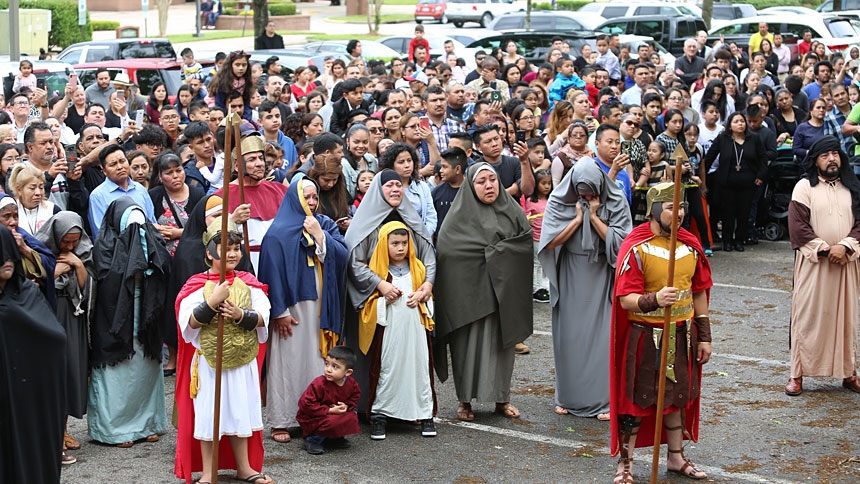 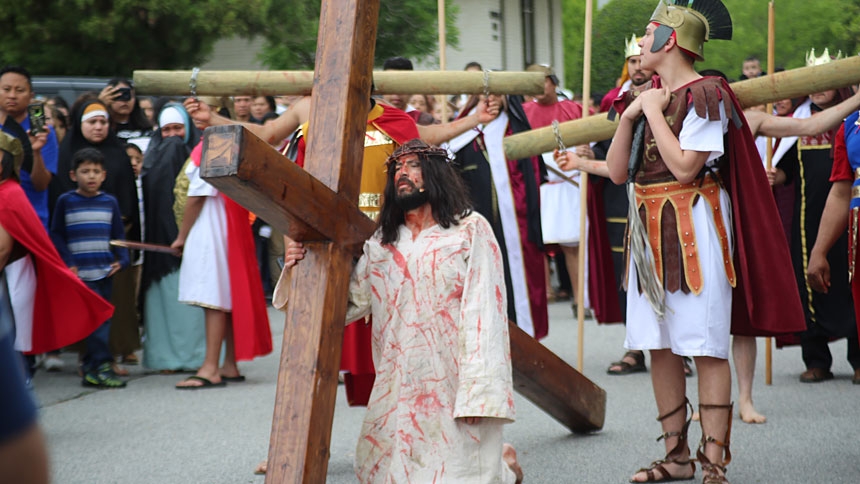