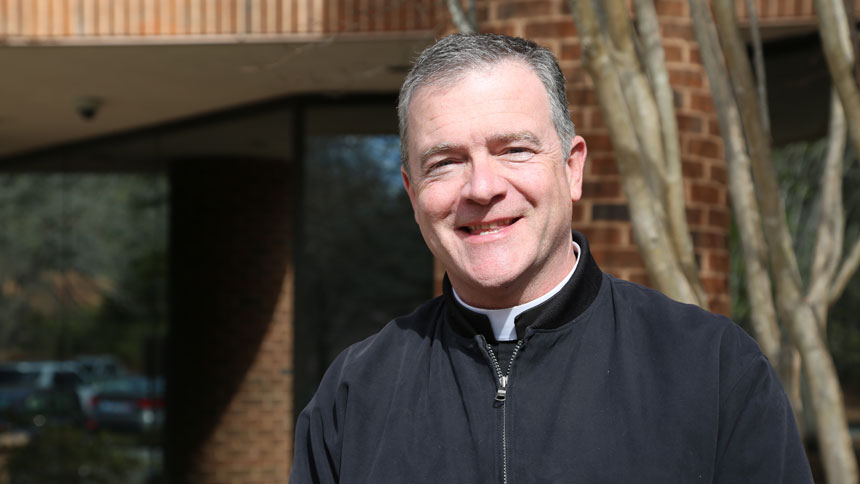 He’d been to Lourdes and Nevers, and the last stop on the pilgrimage to France was Paris. His group of traveling companions was ready to take on the city. But Father Philip Tighe, who’d been diagnosed with esophageal cancer seven months before, wasn’t.

He wanted to sit in front of the Blessed Sacrament. Father Tighe found the 17th century Church of Saint-Sulpice.

As he sat, people approached the altar rail and looked over. It happened enough times to make him curious about why. A gentleman told him it was how the Church picked the date for Easter.

Father Tighe just had to respond.

“No. The Church picks the date for Easter as the first Saturday after the first full moon after the vernal equinox,” he recounted.

The gentleman replied something like: Yes … and there’s a small microscopic hole way up there in a window in the transept and when the vernal equinox occurs, the sun comes through directly at the perfect angle and lights up this small brass disk just on the other side of the rail.

As they spoke, the sun shone on the disk.

“I looked over and I saw the glow of the sun on this disk that was placed there 750 years ago,” Father Tighe recounted. “In an instant it was as if God grabbed me by my collar and said, ‘What are you worried about? I’ve got all this in my control. And I’ve had it in control a lot longer than a priest 750 years ago who put that brass disk there.’”

Father Tighe recently shared this story with a group at the Catholic Center.

For him, the encounter was consolation that his cancer was in God’s control, too. He left France with peace. It’s a peace he hopes everyone can find, especially at the holidays.

“Remember that God is always in control … all of us are in his watchful care and his loving arms,” he said. “As the Bible says 365 times, ‘Do not be afraid.’”